How would a nine-story apartment house look if it were constructed on the cornfield between Main and Pine streets to tower over everything in the Heart of Danville’s historic district?  That was the question posed by The Danville Register in June 1975.  The same developer completed the Jefferson House Apartments in Lynchburg (pictured above) the year before. 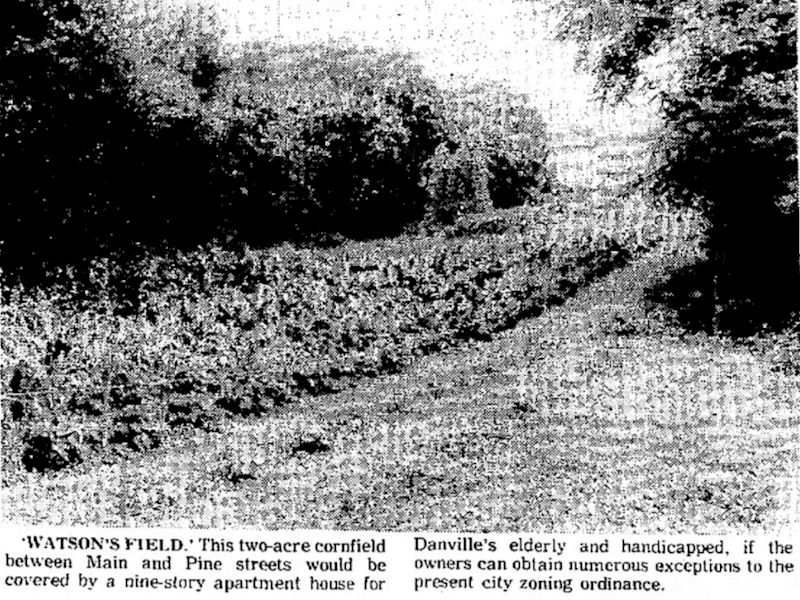 A Reston architectural firm specializing in government-subsidized mid-rise apartments asked the Danville Planning Commission to consider preliminary plans for low-rent apartments on a two-acre strip of land behind First Baptist Church. Financing would come from the Virginia Housing Development Agency and the federal department of Housing and Urban Development (HUD) under their section 8 program. The apartments would be available only to the handicapped and elderly at a monthly cost of 25 percent of their income. The Reston firm cited the need for this type of housing in Danville.

This location was proposed because this type of subsidized development required ready access to public transportation and shopping facilities. Three zoning variances would be required – one for height of the building, one for dwelling unit sizes less than 2,000 square feet, and another for less than one parking space per dwelling unit. 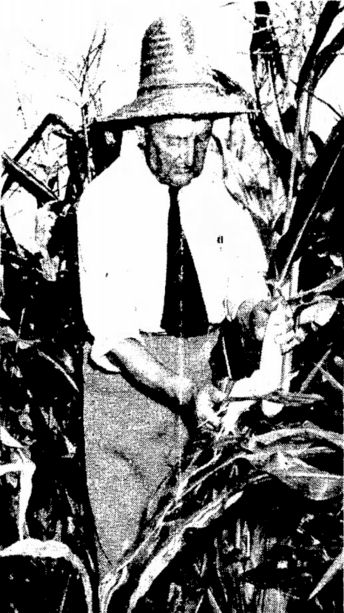 Often called Watson’s Field after its owner in the late 1800s, the location was and still is one of the largest open areas in the heart of the city. It has no street frontage and has a steep slope, a spring, and a creek. In 1975, a level area of the property was being used as a cornfield as shown in the newspaper photo above.  Even earlier, in the 1940s, the pastor emeritus of First Baptist, James Madison Shelburne, used the level area to provide food for his Old West End neighbors.

Not surprisingly, historic district residents did not react kindly to the proposal. Ten nearby residents opposed the project at the planning Commission’s August 1975 meeting. Other than the applicant, only one person spoke in favor – Patsy Crew, director of the Danville Senior Citizens Center then located across Main Street from the project in a home that once stood at 828 Main Street.

Nonetheless, the project was approved by a two to one vote of the Commission with one member absent and another abstaining. That decision was immediately appealed to the City Council by the Danville Historical Society and by a group of historic district neighbors. The City Council unanimously rescinded the Planning Commission’s decision on September 9, 1975.  Later in the year, a similar project proposed by the same developer for Park Avenue near Ballou Park also failed to come to fruition.

More recently, in 2014, a city-sponsored study called the Old West End Revitalization Strategy recommended acquisition of Watson’s Field and neighboring properties to create community recreation space and gardens. This would include a walking trail connecting Pine Street to Jefferson Avenue.

This was followed in 2018 with a report completed by a summer intern from the Danville Regional Foundation and Friends of the Old West End called Open Space Design in the Old West End National Historic District. 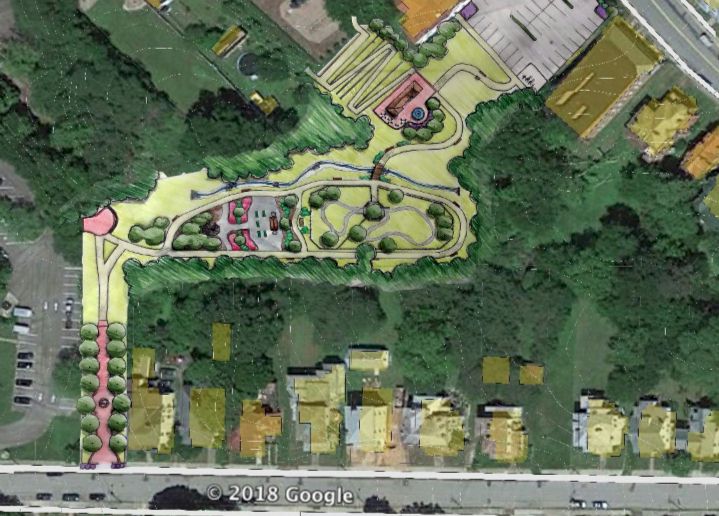 While still in the conceptual stages, perhaps the overgrown and presently unsightly Watson’s Field will again become an asset to the community.