About the Old West End

Home
/
About
/
About the Old West End

The Old West End National Historic District boasts perhaps the finest and most concentrated collection of Victorian and Edwardian residential architecture in the Commonwealth of Virginia. Lining Main Street and adjacent side streets just west of the River District is a splendid assemblage of the full range of architectural styles from the AnteBellum era to World War I.  Two early nineteenth century houses, in all probability the oldest in Danville, 770 Main Street and 225 Jefferson Avenue, are located in the District. 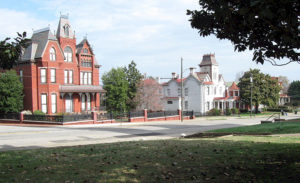 The District is particularly rich in distinguished examples of the post-Civil War styles such as the High Victorian Italianate, the High Victorian Gothic, French Renaissance Revival, Romanesque Revival, Eastlake, and Beaux Arts; styles in which good examples are generally rare in the South. The existence of these impressive dwellings can be explained by the fact that Danville remained unusually prosperous throughout the late nineteenth century. While most of Virginia was suffering an economic depression brought on by the War and Reconstruction, Danville was thriving from its tobacco trade and other industries.

The leaders of the tobacco industry were among the first groups to erect handsome mansions along Main Street, and the sumptuous house, erected in 1876 by James Gabriel Penn at 862 Main Street, stands as visual evidence of the wealth and taste of the tobacconists.  The houses of the tobacco industrialists soon began to vie in splendor with the leaders of Danville’s growing textile industry. The Schoolfield brothers, among others, erected many fine houses in the District.

Most of this post-Civil War growth took place on the hill to the south of the commercial district, in farm land that once was dominated by the Italianate villa-type house of Major William T. Sutherlin.  The Sutherlin Mansion, at 975 Main Street, received fame in 1865 when it served as the last official residence of President Jefferson Davis.  That residence now serves as the Danville Museum of Fine Arts and History. 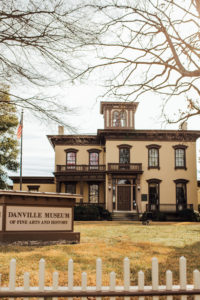 The most fashionable address for the Danville industrialists was along Main Street, in the vicinity of the Sutherlin Mansion, but many equally fine dwellings were erected along the quiet side streets to the east. Interspersed among the ornate piles and their more modest neighbors were elaborate houses of worship, usually in a Gothic mode. Although a number of important houses have disappeared over the years, and though several modern intrusions have been introduced, the District as a whole maintains a turn-of-the-twentieth-century character.

The District was nominated to the State and National Registers of Historic Places in 1973. In addition to Main Street, Broad, Chestnut, Green, Pine, and West Main Streets as well as Jefferson, Holbrook, and Sutherlin Avenues were included. At the same time, the City of Danville created the Commission of Architectural Review [internal link], a seven member board, to review and approve all new construction, exterior renovations, and erection of signs in the District.

Like the original district, the boundary increase area is predominantly residential.  The buildings represent a rich assortment of architectural styles, which are more in keeping with the houses on the residential streets southeast of Main Street than the high-style residences of Millionaires’ Row.  The Old Grove Street Cemetery, the original Sacred Heart Catholic Church, and Midtown Market comprise the historic non-residential resources.  The boundary increase also shares many streetscape features with the original district, including uniform setbacks with shallow front yards and narrow side yards, as well as sections of brick sidewalks with granite curbing.