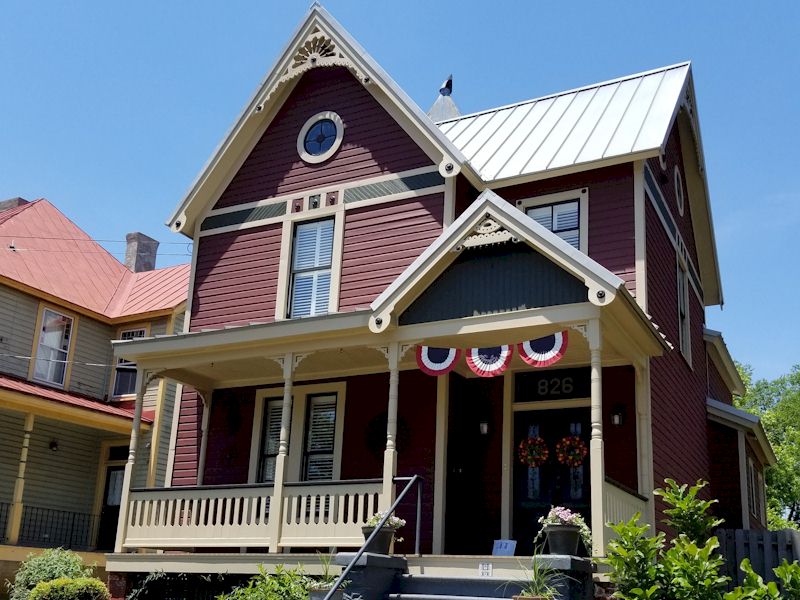 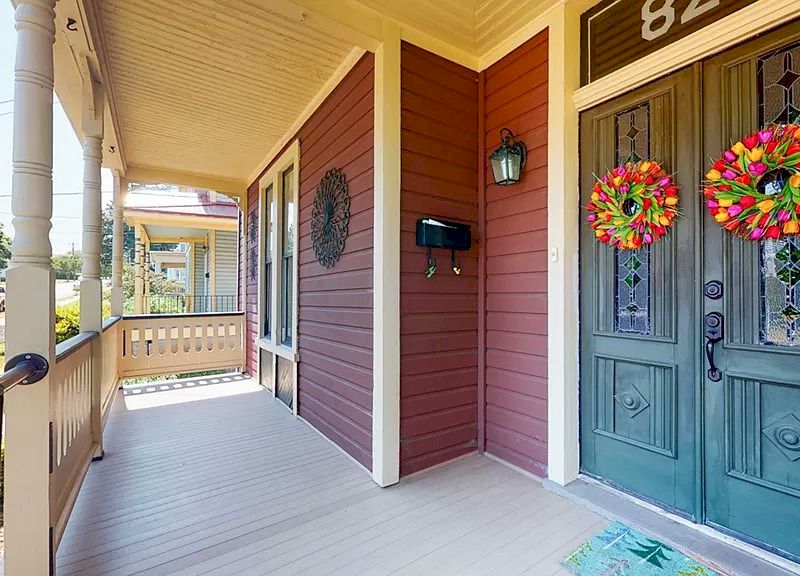 The Danville land book for 1893 records the addition of this side-hall plan house, built for Mr. J. A. Yancey on a 45-foot lot; it was assessed at $1,100 . Little is known about Mr. Yancey, Patton Street grocer who lived here, presumably, until only few months prior his death in May 1900. The preceding January, Yancey and his wife, the former Kate Nelson, had sold the property to Samuel D. Rickman. Rickman, a railroad dispatcher for the narrow-gauge Danville & Western Railroad – a.k.a. the “Dick and Willie” – lived here with his family through the First World War before moving to 826 Grove Street. In 1919 the Rickmans conveyed their Green Street house to Hettie J. Hutson and her husband John. After Mrs. Hutson’s death in 1926, their son, John Jr., inherited the property which he sold in 1928 to Moss W. Turner. The following year Mr. and Mrs. Turner conveyed the property to their son Russell, who lived here with his parents until the eve of World War II. The Turner home continued to shelter Moss and Dora Turner into the 1950s. After Mrs. Turner died in 1956, her husband conveyed the property to the first in a succession of absentee owners. 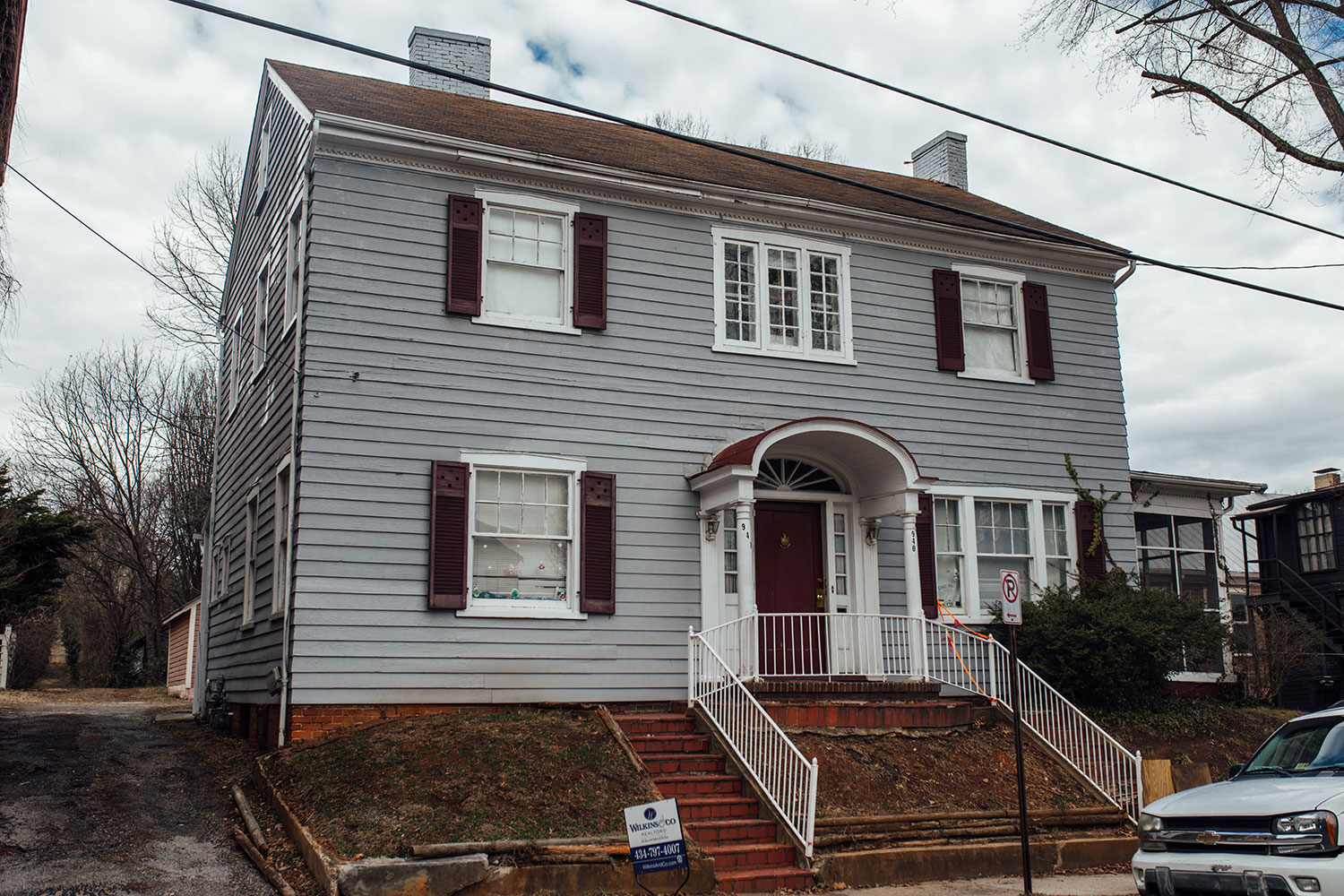 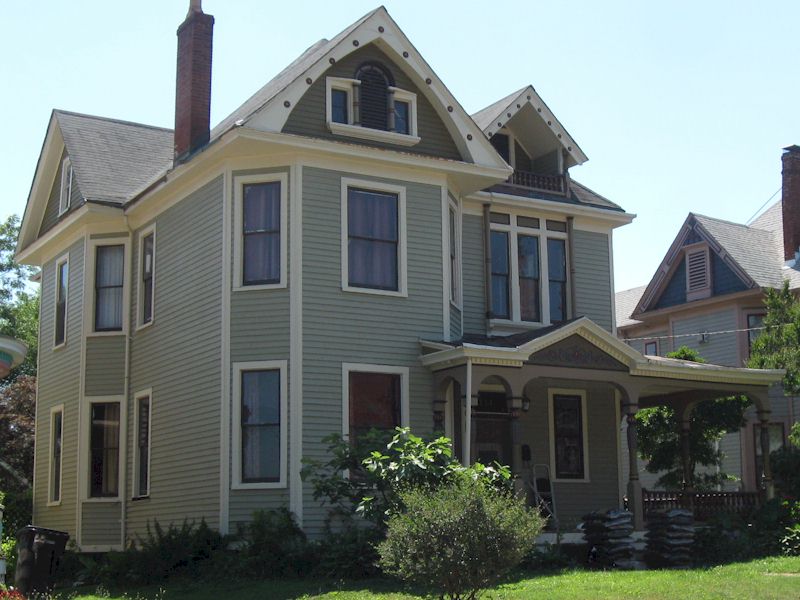 Back on the market at a new price after purchaser transferred again. This Queen Anne Victorian home was built by and for P.F. Conway in 1897. The Day family lived here for nearly 100 years beginning in 1916. The house was recently restored and includes handsome entry, front parlor, library, powder room, dining room, laundry/butler’s pantry, kitchen, front and back porches downstairs. Upstairs there are three (potentially four) bedrooms, including large front bedroom with dressing room annex, two large bedrooms with attached bathrooms and a sunroom and porch attached to the rear of the house. There is also an outbuilding with plenty of storage or potentially a workshop. Lavatory attached to the back of the house needs to be restored or removed. Updated features include new service panel, new wiring in kitchen, all new pex supply lines, new gas furnace downstairs, new heat pump a/c upstairs, new water heater. Asphalt roof is older but sound. Fireplaces in front parlor, library, dining room, front upstairs bedroom, master bedroom and in one bathroom. The house is solid with little settling, beautiful hardwood floors throughout, bright and sunny sun room on the back could be an additional bedroom. 1,000 square feet of usable, unfinished attic space could offer additional living space when finished. A few final cosmetic projects are ongoing. The house is otherwise sold as is. Some furnishings original to the Day’s occupancy in the house will be conveyed. Wonderful house in a great neighborhood! Brokers protected. 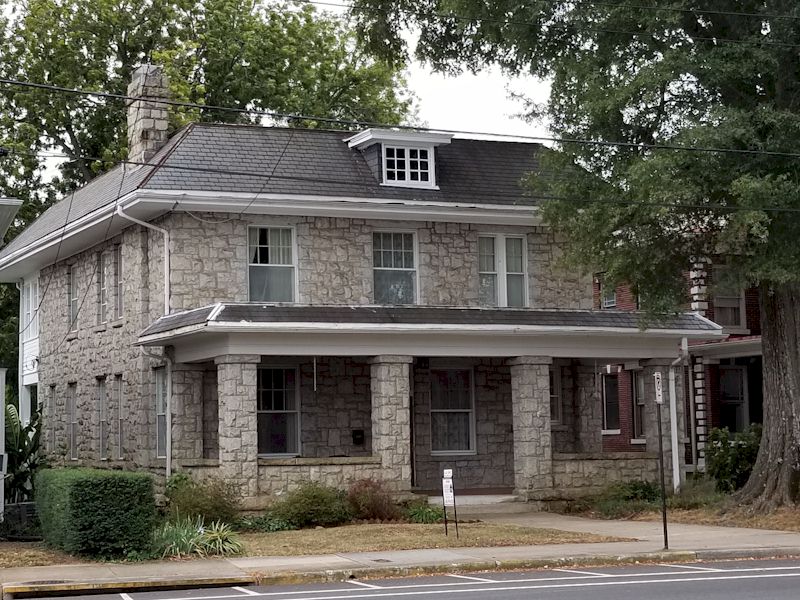 Beautifully Restored Historic Home Built in 1904. This home has the charm of yesterday with today’s modern conveniences. The present owners added 3 heat pumps, insulation in walls and ceilings, and new storm windows to make this large home energy efficient. The moldings and hardwood floors are works of art. The chandeliers are original. It is truly spacious and gracious. This solid stone home has a beautiful front porch, grand foyer, living room, dining room, second living room, kitchen updated with granite and stainless, a large butler’s pantry and pantry, wide hallways, possibly 5 bedrooms, 2.5 baths, walk-up attic, a basement like no other older home, shared driveway, detached garage, beautiful garden area in back with stamped concrete patio.

See it on Zillow 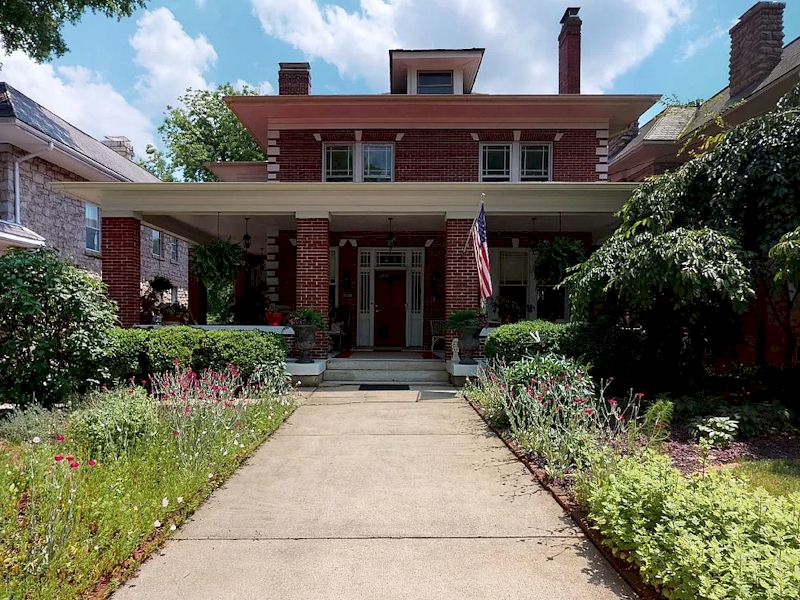 When you view this stately Georgian 1908 home in the Old West End Historic District, you might think the inside will be formal and filled with dark wood antique furniture. Nothing could be farther from that impression. This warm and welcoming home is filled with light and energy. The owners collect art and the house abounds with color. Also, enjoying entertaining, the kitchen is a chef’s delight and the spacious wrap around front porch and covered back terrace allow for a great flow and privacy Brokers protected

More About the Muse House
More about Kevin and Melanie Vaughan

The Properties Below are Sold or Under Contract 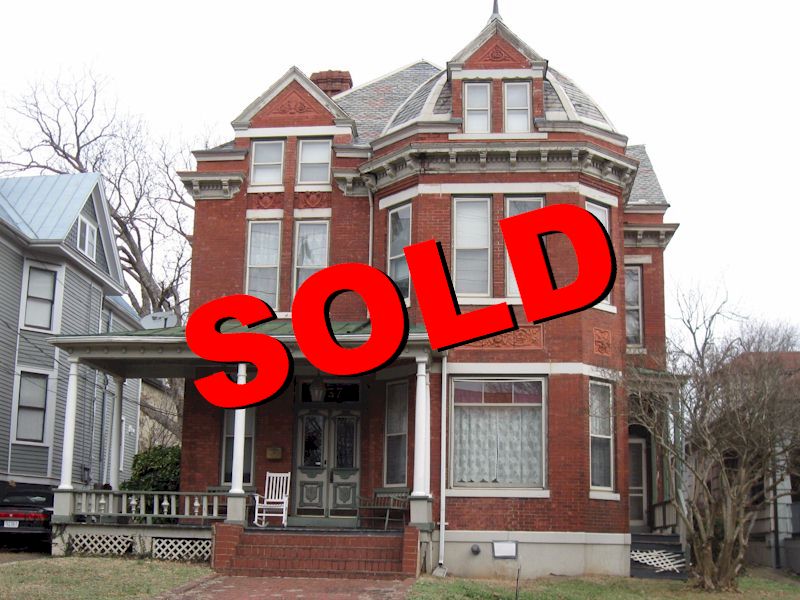 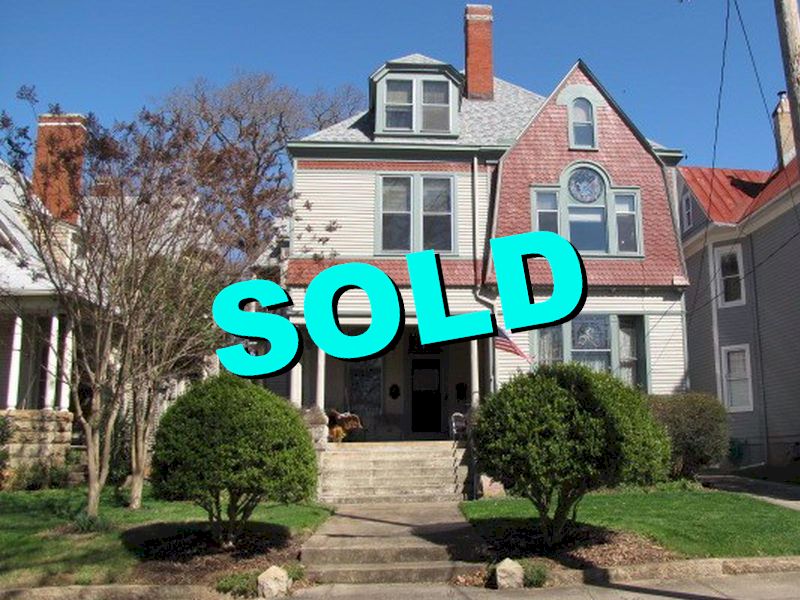 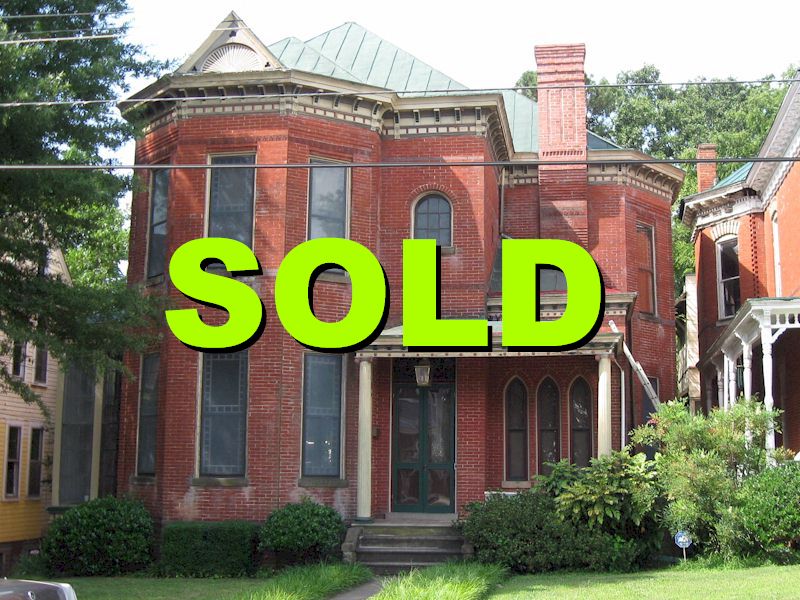 One in a row of similar “townhouses” dating from the 1880s, 234 Jefferson Avenue exhibits details typical of Queen Anne style — complex massing enriched by architectural terra-cotta and stained-and-leaded-glass windows. Whether one looks down at the encaustic tiled porch, or up to intricate ceiling medallions inside, the structure is an eclectic mix of color and pattern. It was constructed in 1885 for Albert and Sabina Gerst, among the first persons of German Jewish descent to settle in Danville. 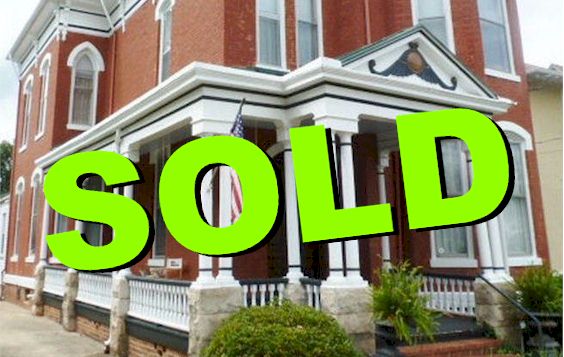 This dwelling is the survivor of two mirror-image homes built by the Lipscomb brothers in 1884. Fully restored and carefully maintained, it also includes modern amenities such as a whirlpool tub in the master bath, walk-in closets, and a kitchen with custom cabinetry and granite counter-tops. This beautiful Millionaires’ Row home has everything a buyer could want. 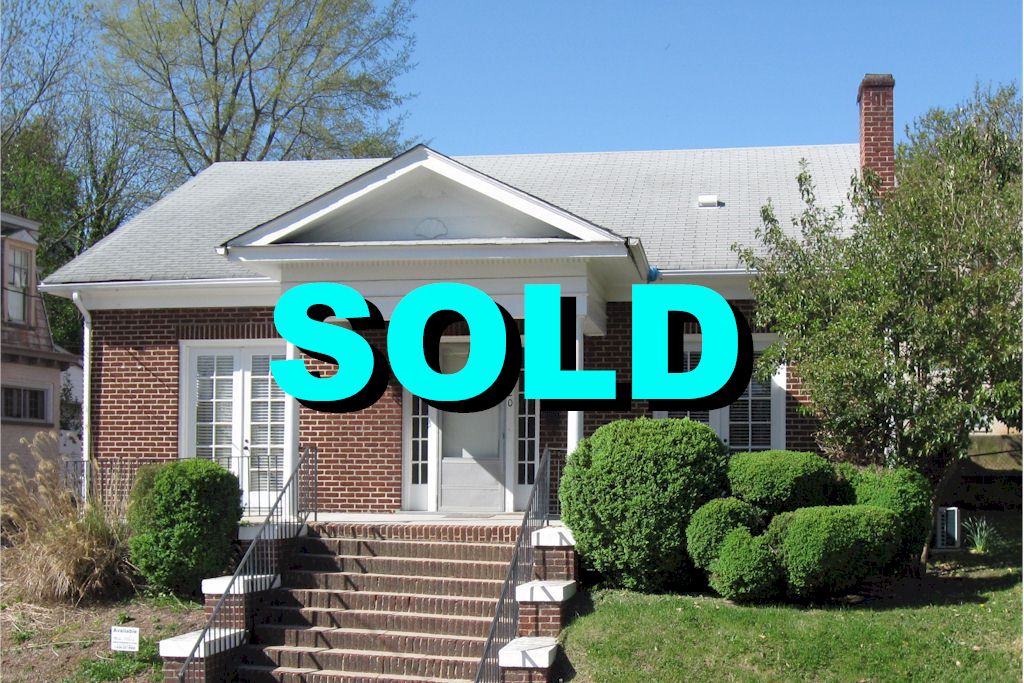 Constructed in 1925, this home was owned by Dr. Samuel A. Shadrach, a dentist and a veteran of the Spanish-American war of 1898. “Remember the Maine!” This brick Colonial Revival bungalow with a side gable roof is an unusual example of this style in the Old West End Historic District. The structure boasts an open terrace that extends on either side of the front porch roof that is supported by Tuscan columns. An entry door flanked by multi-light sidelights welcomes you into the home. 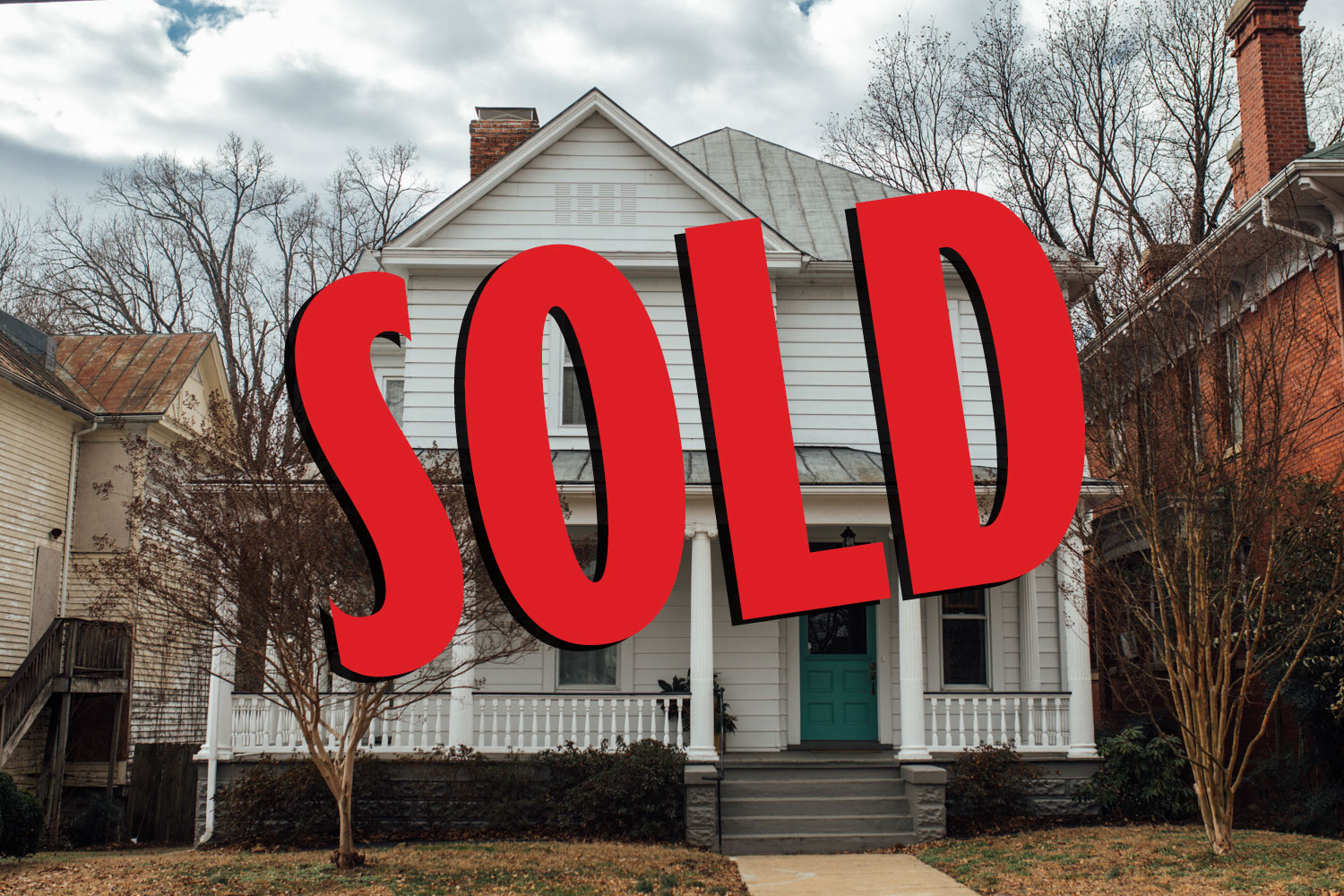 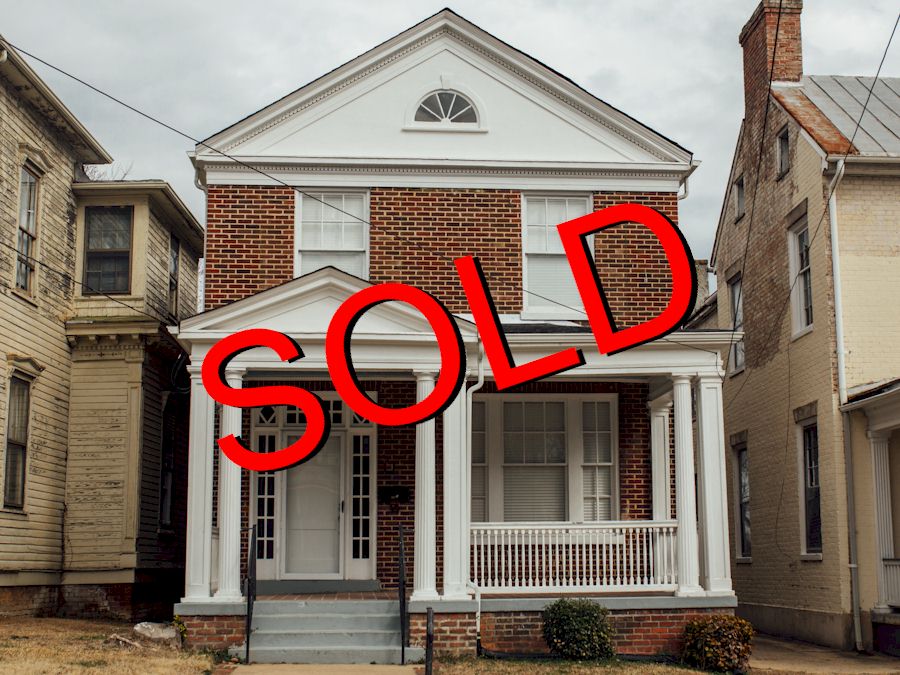 This home, vacant since 2007, was acquired by the Land Bank in May of 2014. A two-story classic revival brick structure, it was designed by local architect J. Bryant Heard with incredible detail on the exterior and interior. Restoration of this home has been assisted in part of by a Certified Local Government Grant from the Department of Historic Resources. The home is now a 2,200 square foot three (3) bedroom, two and half (2 ½) bath home with a convenient floor plan. The home possesses a large master suite on the upper floor, and a magnificent kitchen and laundry at the rear of the house on the first floor. 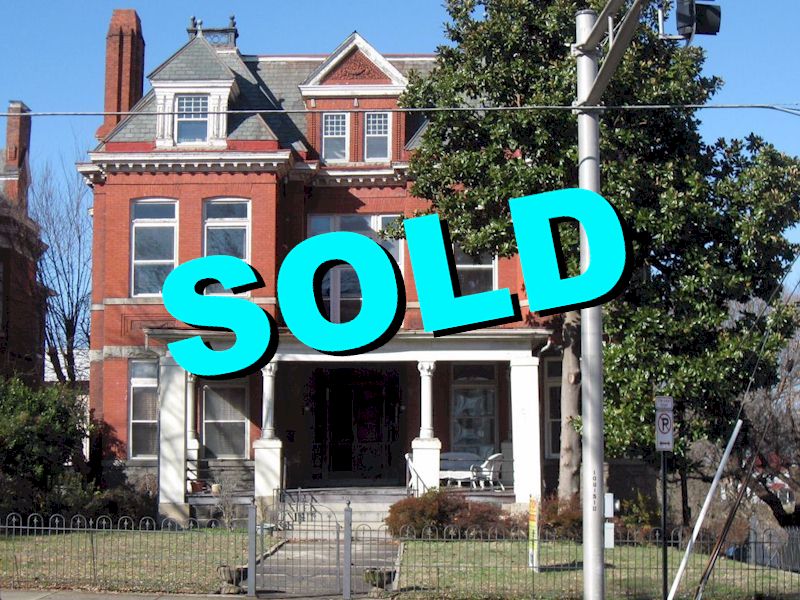 Built in 1890, this bold, beautiful, sophisticated, 3-1/2 story brick mansion with outline inspired by French Renaissance chateau. Five full baths and 2 half baths, crystal chandeliers, massive pocket doors and more.  It Boasts Belcher Mosaic Co. windows (circa 1850-1890), gorgeous leaded side lights, and slate shingles.  James Mastin Neal was the son of Thomas D. Neal, who revolutionized the sale of loose tobacco when he began “The Danville System” auction method in 1858 that became known worldwide. 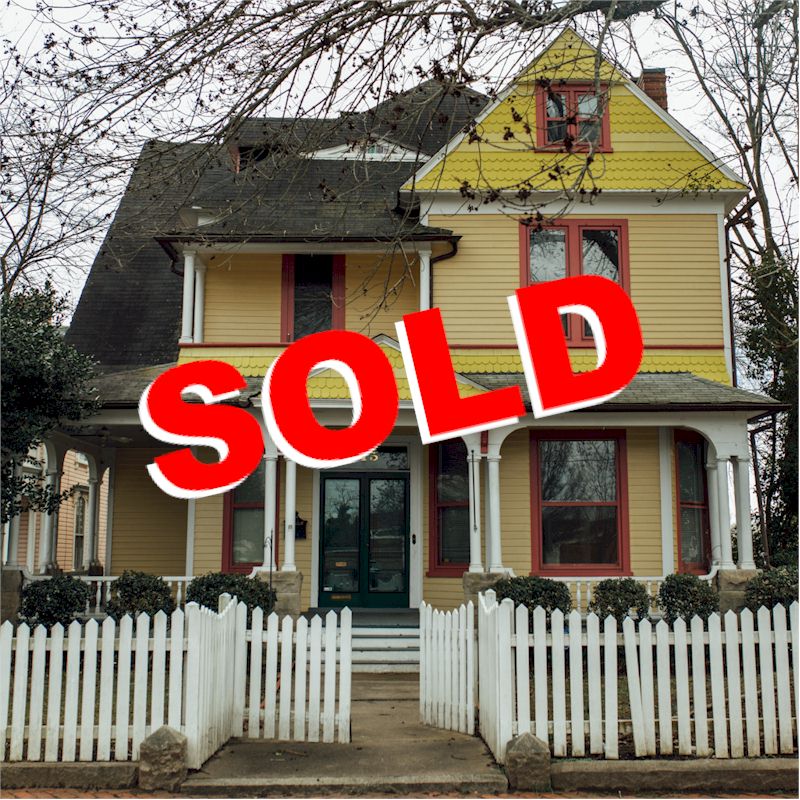 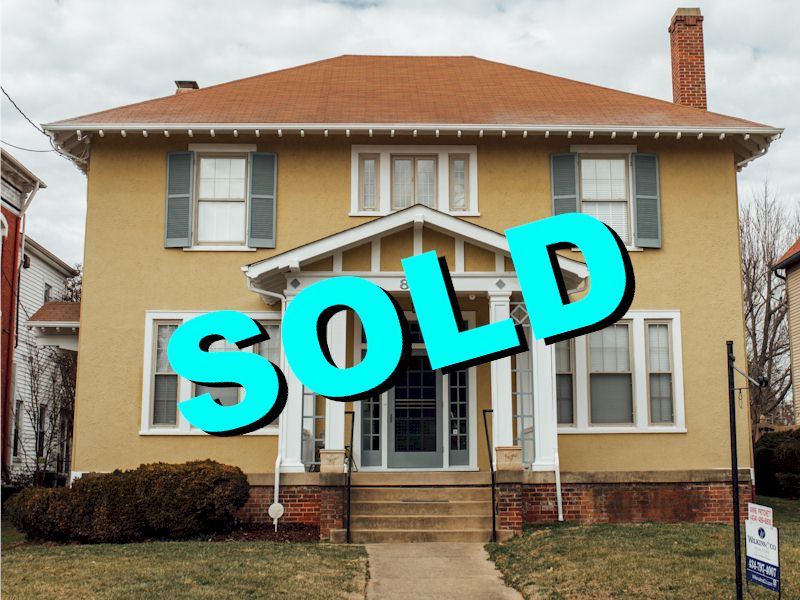 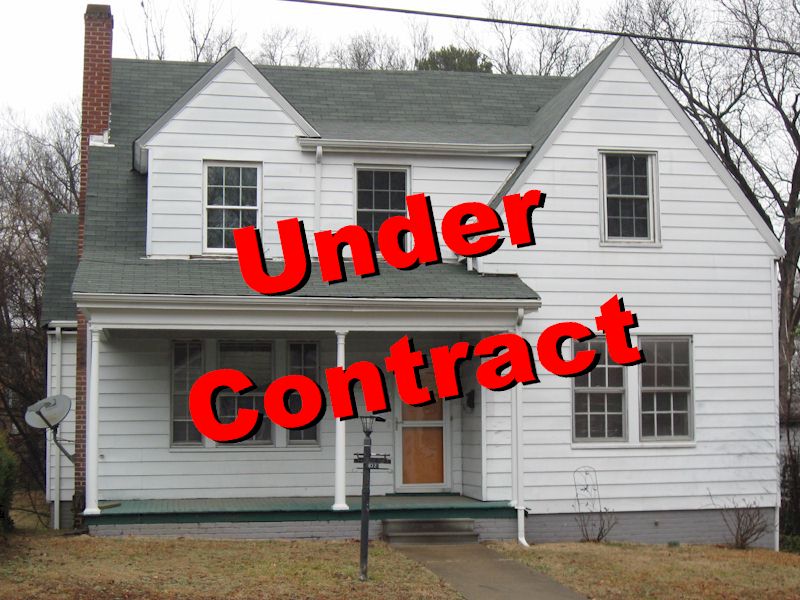 Built in 1920, this 4 bedroom home was first occupied by James William Jones, a railroad man. On his death in 1931, he left an estate valued at $18,095. His widow continued in the home into the 1950s. Nice size parlor and study adjacent to front entry. French doors to dining room adjacent to updated kitchen with newer appliances. Full bath downstairs. Family bath has whirlpool tub. 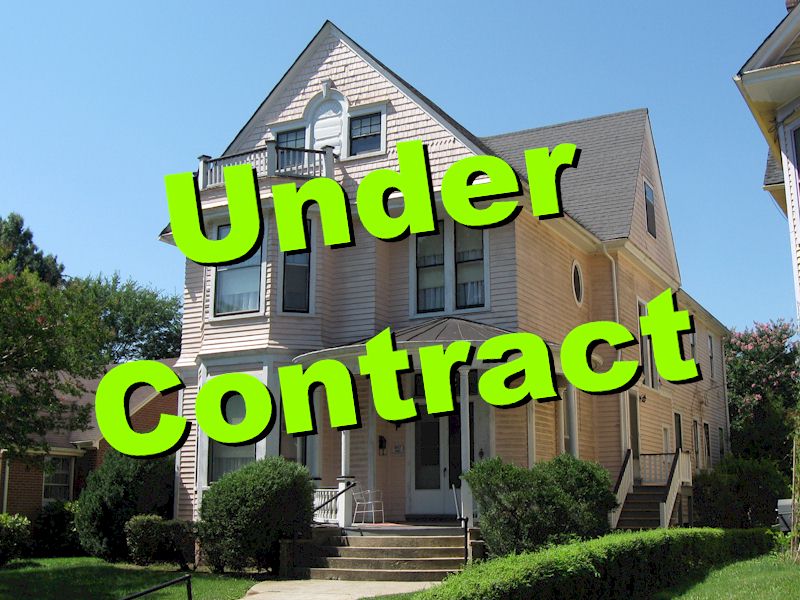 This spacious home was built between 1885 and 1889 by William Penick Boatwright. He founded the Boatwright Brothers Company selling books, stationery, and printing before 1890. He married in 1893 In 1902, he was able to set himself up in the furniture business, opening a showroom on Main Street and a factory south of the railroad tracks. William and Frances Moore most recently occupied the home and raised their family there.  Mrs. Moore survived her husband, recently passing at the age of 101. 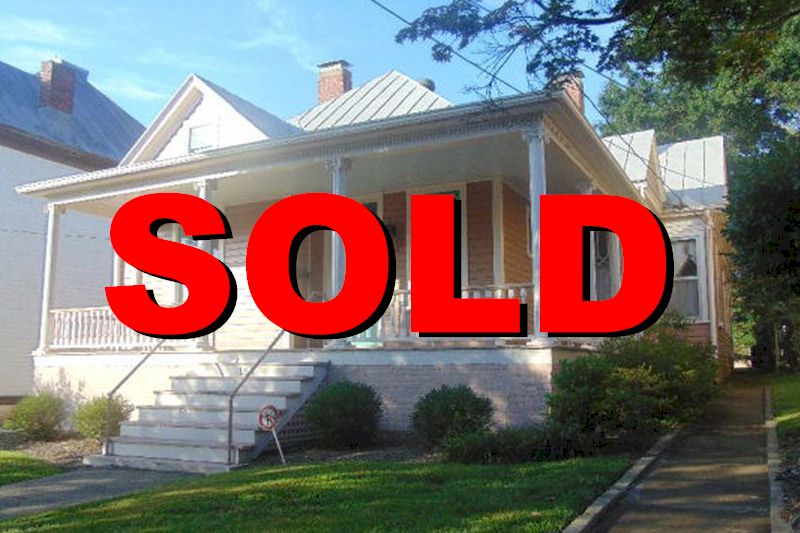