If you are like us and love all things old-houses, then your internet and social media searches have probably led you at some point to Old House Life, a website (at theoldhouselife.com ), and its accompanying social media presences on Facebook at Old House Life and @old_house_life on Instagram. These popular accounts (almost 700,000 followers!) is the brainchild of Michelle Rose Bowers.

Michelle’s passion for old houses began as a young girl when she and her sister would explore abandoned houses, imaging as they did what life was like for the people who originally lived in them. Later, when Michelle had children of her own, she would share her love of old houses with them by driving backroads and searching out old abandoned houses. In 2013, Michelle’s sister passed away. In her grief, and as a tribute to her sister, Michelle created the Facebook page, Abandoned Homes of North Carolina. The page took off and quickly became a center for all things old-house related and evolved into Old House Life.

Michelle, who lives presently in Youngsville, NC, discovered Danville via an article written about the Sublett-Miller House, owned and restored by our dear neighbors Tom Belles and Carla Minosh. Michelle reached out to Carla, who promptly returned her message. She wanted to visit the house, and Carla who was in town at the time, eagerly invited her to come. Michelle, who was staying at her mother’s house in Alton, drove down to Danville that day and met Carla face to face. The two quickly became good friends. On subsequent visits to Carla’s home, Michelle grew to appreciate what Danville had to offer in the way of its collection of historic homes. “The Old West End has such an eclectic mix of historic homes,” she told us at the Gazette. “It really is fun driving around saying, ‘Oh wow! Look at that one!’ It happens on virtually every street in the Old West End!”

Inspired by the work we are doing to save Danville’s historic homes, as well as by the neighbors she has met who are as passionate as she about the houses they are restoring here in the Old West End, Michelle began to consider buying one of her own. She made some quiet trips to Danville to look at houses, and she spent a few months doing so, often asking to see the same houses over and over again. The homes she found herself considering all needed various amounts of work, some extensive, others not so much. Among the homes that needed major renovation was a small house on Chestnut Street with a leaky roof and a dilapidated rear addition. For whatever reason, that little cottage, despite discouragement from friends and colleagues, kept calling back to her. Eventually she decided to follow her gut, and she made an offer on the house at 124 Chestnut Street, known by many of us as the Chaney house.

Encouraged by her friend Carla, who told her the house needed “a magical name.” Michelle has dubbed it “the Sunshine Cottage,” in honor of its longtime residents Fred and Steffie Chaney, who clearly loved the house that was their home for four decades.

Michelle often features homes from Danville on her website and social media pages. “I’ve been telling so many people about the Old West End!” she says. “It’s a community of preservationists all striving to save old homes! It’s a great opportunity!” In addition, Michelle says that she wishes to share her gratitude with her new neighbors. “I want to thank everyone for the warm welcome.” Those who have met Michelle on her previous visits have been eager to offer their warm welcome to her, and she’s found that both heartwarming and encouraging. We are certainly excited to have Michelle as a part of our community here, and we are excited to watch as she transforms the Chaney House into the Sunshine Cottage, an appropriate name for such a charming and picturesque home! 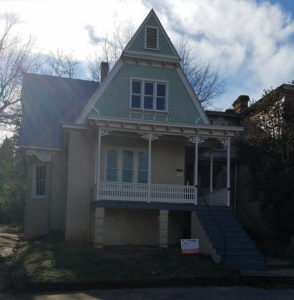