Charles and Celena Adams have always been old house enthusiasts. Celena, who was born and raised in North Carolina, periodically visited Danville, and she grew to admire the town’s historic charm and its collection of unique period architecture. She’s always pictured herself living in a Victorian home in a historic community like Danville.

Charles, a native of Oklahoma, moved with his family to North Carolina during his teenage years, and it was then, when they were fourteen, that two met through a cousin of Celena’s. The pair became friends, but his family did not stay long in North Carolina and in time decided to return to Oklahoma. North Carolina, however, left an impression on Charles, and so he later moved back. It was then he reconnected with Celena and the couple started dating.

Charles works in Commercial and Residential Construction, which eventually took them to Savannah, where Celena became licensed as a Real Estate Agent, and Charles began to collect experience working on historic homes. One of his more memorable projects involved the restoration of a staircase located in a house that served as Washington’s headquarters during his tour through the South. Charles enjoys the human elements of history, particularly where they connect with architecture, and he found it especially rewarding to have rescued a staircase that Washington himself once climbed and descended. 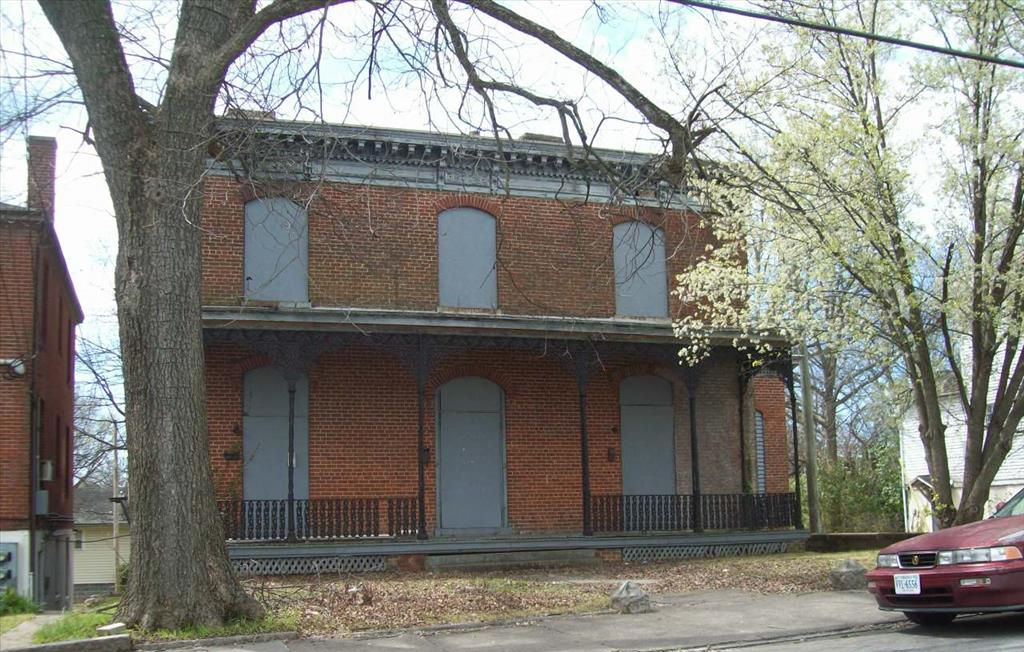 Because of the pandemic, the opportunity arose for the Adamses to leave Savannah and return to North Carolina. It was at that point that their thoughts turned once more to Danville. They began their search for a historic home by looking through the Cheap Old Houses website. As they did, Danville popped up with increasing frequency. They could see that the town was really going through a period of serious revitalization with concerted and intentional efforts to protect the historic architecture that is such an important part of the town’s character, history, and charm.

It was at that point that the couple decided to make a personal visit and see for themselves all that was happening here. On the OldWestEndVa.com website they spotted a couple of houses they thought they might like to see. They contacted Paul who showed them a house on Pine Street, as well as the Venable-Carrington House at 622 Holbrook Ave.

The Venable-Carrington house is unique, in that its architectural style, with its brick exterior, low-pitched roof and wrought iron porch posts and handrails, is more exemplary of something found in the low country of South Carolina and Georgia. As it was in those places that Celena gained her love and knowledge of historic homes, the Venable-Carrington house seemed to be a perfect match. She was later interested to learn that Mrs. Carrington was somewhat famous for her love of entertaining, yet another connection between herself and the homes’ past. The house, its aesthetic, its character and personality, seemed to be exactly what the Adamses were looking for. (Read more about the home’s history here)

It was clear from first touring the home, however, that the Venable-Carrington house’s interior had been changed considerably over time, converted into a quad-plex, which was not in harmony with the original intent or design of the house. “It just felt like it wasn’t intended to be that way,” she said. During their time in Savannah, they came across far too many houses that were purchased cheap and converted into apartments. In the Venable-Carrington house she feels that, in some ways, she is at last getting a chance to avenge the wrongs done to so many of these old houses, and Charles, who has some expertise in the area of historic restoration, feels himself uniquely qualified for the challenges the home’s restoration presents.

As a real estate agent with experience in one of the country’s premier historic markets, Celena knows a treasure when she sees one. Together, with their three children, they look forward to restoring the house to its former glory and making a home here. The family presently lives in Greensboro, where they will continue to live while the major renovations take place, but they look forward to being a permanent part of our community soon.

When asked what she would say to others who were considering buying a historic home in Danville’s Old West End, Celena said, “Jump on it!” As a real estate agent, she’s used to serving buyers who want something more polished than the Venable-Carrington House presently represents. Usually the neglect and deterioration a house like this one has suffered would not be selling points. In this case, Celena feels it’s “a win/win situation. Not only is it a beautiful home, but it’s a great investment!” She pointed out the evidences the city is providing in its interest in bringing new people in, in creating an entrepreneurial atmosphere that draws in small business, while at the same time taking advantage of larger opportunities, like that of the casino, that will bring more revenue into the city, further benefiting its residents and the other historic neighborhoods—Schoolfield Village, in particular—for years to come.

Those of us in the Old West End who have learned to love these houses as the Adamses do, are certainly looking forward to all they will add to our neighborhood, and we look forward to watching the transformation of the Venable-Carrington House take place. Welcome Charles and Celena Adams!