Danville’s River District was once a haven for restaurants – typically quick lunches, luncheonettes, coffee shops, and cafes. In the 19-teens and 1920s, there were about twenty restaurants or “eating houses” as they were sometimes called. From the 1930s through the 1950s, there were more than forty (sometimes fifty) independent restaurants downtown.

Why so many? This was a time when manufacturing, warehousing, and retailing mostly occurred downtown. It was also the time when many of the factory workers were boarding and rooming in the large homes in the Old West End. Those simply renting a room had to take all three meals at restaurants.

Many ran under business names that implied quality or cleanliness rather than the proprietor’s name. Local examples include the Sanitary Café on North Union Street and the Gold Leaf Lunch on Craghead Street. Owners did not want their eateries to be viewed as “greasy spoons.”

One of the more upscale restaurants was the Cavalier – adjacent to the Capitol Theater and the Hotel Danville. Its exterior is shown above, the interior below. This site is now the driveway of the American National Bank drive-through. 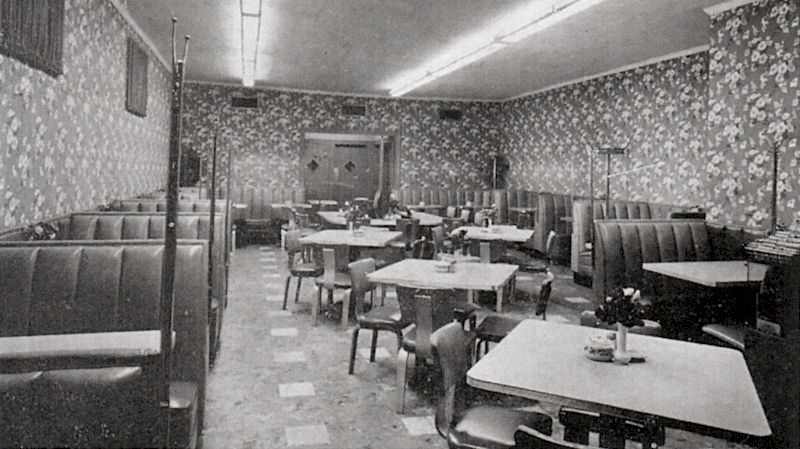 The Old West End also had a few restaurants at Five Forks. There was Pat’s at 403 Jefferson Street. And 419 Jefferson (see the listing) hosted a series of restaurants including Fuzzy’s Place and the Five Forks Soda Shop. By 1962, this address was the Wagon Wheel Restaurant. At lunch, they offered a plate with meat and two vegetables plus a drink for 75 cents. By July 1963, it was completely air conditioned and offered a “money-saving dinner” every night from 5:30 until 7:00.

As reported for the home at 820 Pine Street, Peter George Maurakis and many other Greek immigrants entered the restaurant business. It seems Greek immigrants were especially inclined to run American restaurants which serve mainstream American food. Typically, their establishments were open long hours, serving breakfast, lunch, and dinner to working people.

Greek immigrants spread to many regions of the U.S, bringing restaurants to the restaurant-starved South. A Raleigh-based Greek trio opened its 15th restaurant in North Carolina as early as 1909. About 20% of the members of the National Restaurant Association had Greek surnames.

By the end of the twentieth century, there were few eateries downtown. Fortunately, the River District and the Old West End today are seeing a rebirth of independent restaurants and cafes. Bon Appetit!