The carving of vegetables into lanterns to celebrate fall events is a practice of long standing. The carving of pumpkins – rather than gourds, turnips, or rutabagas – is less so.

Early Irish immigrants to the United States brought the tradition of making jack-o’-lanterns at Halloween.  According to Irish folklore, Jack was a blacksmith who had tricked the devil on several occasions. The story says that when Jack died, he was denied entrance into both heaven and hell. When the devil turned him away, he gave Jack a burning ember. Jack hollowed out a turnip to carry the ember and give him light. The Irish remembered this story each year by carving scary faces on turnips and placing a burning piece of coal inside. 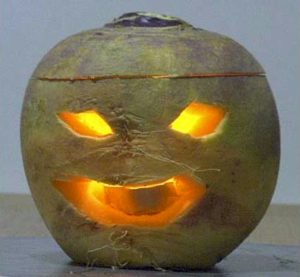 However, when the Irish immigrated to the U.S., they discovered that pumpkins were more readily available, and they could make pies with the portions carved out.  Pumpkins eventually replaced turnips, and candles (and now LED lamps) replaced the burning ember.

Because of their love of history, many Old West Enders will be using turnips and rutabagas for Halloween this year.  Making a turnip lantern is not difficult. Just follow these simple instructions:

The Gazette hopes to see a turnip or rutabaga on your porch this Halloween.