A Tobacco Barn in the City?

Danville’s history begins with the story of tobacco. While the many large and stately homes that line Main Street were built and occupied by tobacco investors and business barons, Danville’s birth, growth, and 19th century predominance is owing to the hard work of farming tobacco, which of course took place in the more rural environs of the area. 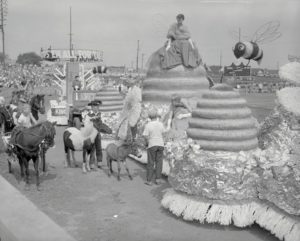 Although private, family-run tobacco farms represent something of a bygone era in Virginia, its former prominence is evidenced by the many tobacco barns that dot the landscape. These landmarks to a former way of life represent an industry that influenced everything from local economics and politics to social and class structures. Long before there was a textile giant in Southside Virginia, there was tobacco.

The preservation of the history of tobacco is so important to the story of Virginia that in 2013 Preservation Virginia formed a partnership with JTI Leaf Services to establish the Tobacco Barns Project, an initiative to identify and preserve the areas tobacco barns as monuments to a quickly disappearing way of life. While tobacco barns can be found all over Virginia, they are particularly prominent in the region known as the “Old Belt”, a swath of landscape encompassing the North Carolina—Virginia border, where bright leaf tobacco was especially successful.

Tobacco was not an immediate boon for the “Old Belt” region. Initially the low-nutrient highland soil appeared only to produce thinner, weaker plants. These crops were not particularly promising. Except that those plants also happened to produce a lighter, more aromatic flavor—something that was growing in demand in the early to mid 1800’s. When it was discovered, by accident, that the intense heat produced from the smoldering coals of a fire (rather than the fire itself) would turn the leaves of these plants a pleasing bright yellow, “bright leaf” tobacco was born and the region’s tobacco fame began to take shape. The combination of this discovery and Danville’s proximity to the railroad, as well as its canal system which allowed transportation of goods to the coast, made Danville the perfect place to establish a tobacco capital. Soon, tobacco inspection stations and markets were installed, investors and major tobacco warehouses arrived, and Danville’s fame was on its way to being established. 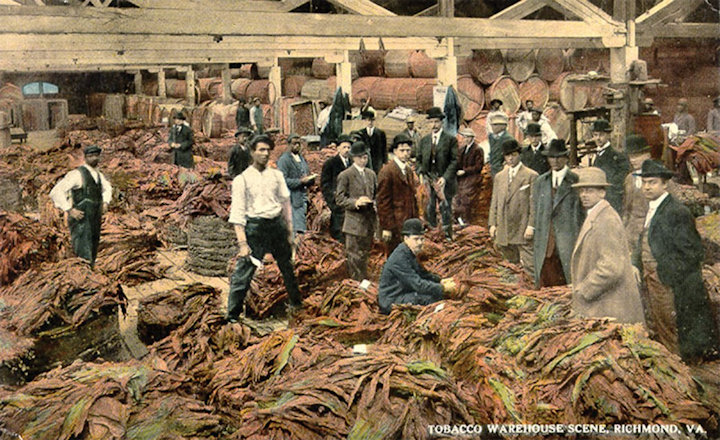 Back in the country, tobacco was being farmed and the leaves processed. The work was labor intensive and entire families participated in the planting, harvesting, and curing. Planting began in May or early June when seedlings or “slips” were planted. In July, as the plants grew, they were “topped” to ensure that the energy of the plants was directed toward the leaves, rather than the flowers. Then, in August and September, the leaves were pulled from the plant and tossed into a large open crate called a “slip” that was dragged by a horse or mule, or later, by tractor. If the stalks were left standing, as later became the case, the leaves would grow back and would be harvested again, as many as five times in a season.

Once the leaves were pulled, they would be strung on sticks and hung on tier poles inside the tobacco barns. The barn was heated, first to 115 degrees, and then gradually increased until, by the third or fourth day, it reached a temperature of up to 180 degrees. Once the leaves were cured, they might be carried to market loose or prized (pressed) into barrels (as seen in the background of the image above).

Modernization of the curing process starting in the 1970’s made the use of these curing barns obsolete, replaced by more efficient prefabricated metal barns that held more tobacco and at the same were immune to fires. Over time, the old tobacco barns fell out of favor and were left to fall into disrepair and, without intervention, destruction.

According to Sonja Ingram, a field representative for Preservation Virginia and an Old West End neighbor, there were perhaps five or six thousand tobacco barns in Southside Virginia. “Bright-leaf tobacco shaped the landscape, shaped the culture and the people,” Sonja said in an interview with Virginia Living magazine in October 2012. “Out in rural areas, the only thing that’s left are these barns, so we want to keep them in the landscape. They’re beautiful. They’re picturesque.”

Last year, Sonja was contacted by Sharon Conner, who, with her mother, Barbara, own the last tobacco farm in the city of Danville, operational until sometime in the 1980’s. Once a part of Pittsylvania county, the Danville farm, located on Seminole Drive behind Roman Eagle Rehabilitation and Health Care Center, was annexed and became part of the city in the 1950’s.

The tobacco barn, built in the early to mid 19th century, according to Sonja’s estimates, has been in the family since at least the 1850’s. The barn is a six-room barn with large overhangs, which are seen in other early barns of the area. The size, too, is indicative of earlier barns. The overhangs provided some protection to the mud and beam structure. The barn was built as a curing barn, as evidenced by the openings in the sides where the fireboxes were once located. It was later converted to a pack barn, when the wood floor would have been put down.

Whether this is a barn that will be rescued and restored is at present unclear. The family no longer live on the premises and the house, a modern construction after the dilapidation and destruction of a historic plantation house on the property, is occupied by renters. Nevertheless, a tobacco barn within the city limits is a rare find, and an interesting window into a former time.

To learn more about Preservation Virginia’s Tobacco Barns Project, visit their website here.  Additionally, you can read more about area tobacco barns that have been preserved by the project in this wonderful book.