The Newmans of 876 Pine Street

Reginald and Kathy Newman have always had a fascination with collecting and restoring all things old. Kathy has a long history of buying and restoring antiques, while her husband is in the autobody and paint business, which occupation he began when he was only seventeen. Even from the time they were first married, when they were both in their twenties, they had a love of old houses.

Though the Newmans have been anchored in the Greensboro area for the majority of their adult lives, about twenty years ago they began thinking where they might like to live when it came time to retire. They both thought it might be fun to restore an old house, but the question remained, where? 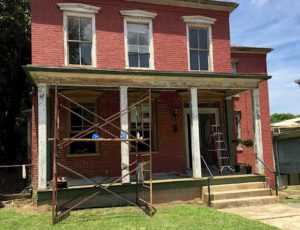 Both Reggie and Kathy had some ties to Danville. Mr. Newman was born here and it was here he spent his childhood. Kathy had family who were from Schoolfield, so the couple were hardly strangers to the area. One day they decided to get in their car and make a drive north to see where Reginald’s mother had worked in the mills, as well as the home she had lived in and where she had raised her children. Kathy fell in love with Danville on that trip. She was impressed by the beautiful tree-lined streets and the large houses on Main Street. They loved the river that ran nearby, and the good feeling it offered to the town’s atmosphere. They drove all around looking at the houses and admiring these beautiful relics to history. Street by street they examined them, and then they arrived on Pine Street. Kathy says her heart stopped when she “saw the tall brick beauty” at 876 Pine Street. Out front was a tiny little for sale sign. She phoned the number and expressed her interest in seeing it.

In 2000, the home became theirs when Reginald bought it as a gift for Kathy. 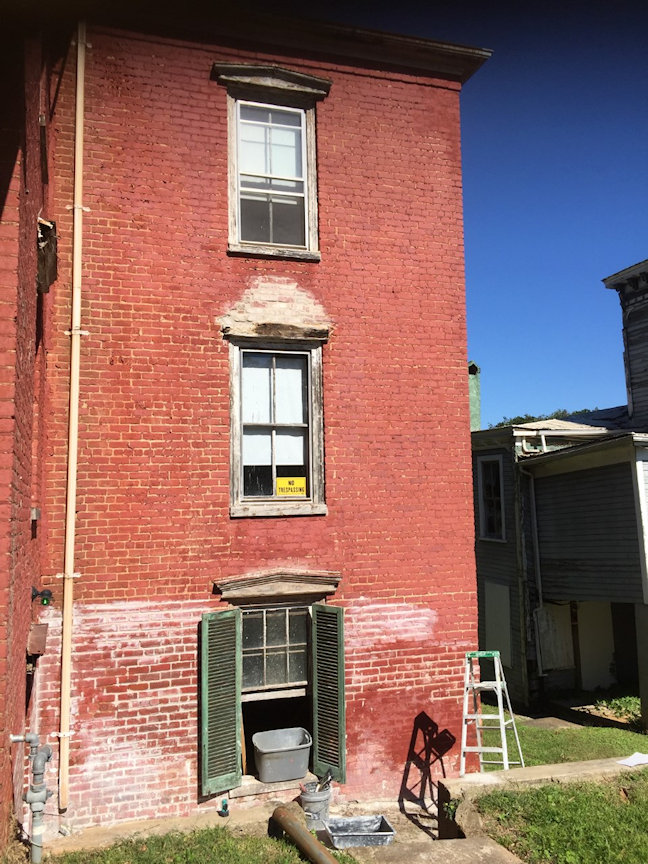 The house was hardly in livable condition, however. Previous owners had turned the house into a duplex, and had done so without permission or zoning oversight from the city. Walls and transoms had been painted with spray paint. There was garbage and mattresses and the remnants of former tenants everywhere. The house, as a duplex, had a kitchen and a bathroom on each side, but they were in such bad condition one couldn’t consider using them, even if there was water or power—which there was not. By the time the Newman’s purchased the house, it had been sitting vacant for several years. As to the exterior, it was covered in ivy so that only about a third of the house was visible. But there were some positives. The staircase, and original mantels were present and in beautiful condition, as was the bay window off the kitchen on the southwest side of the house. Apart from the damage done during the home’s use as rental property, it also appears the house suffered a fire at some point, which destroyed a rear section of the structure. Four doorways and a rear deck attest to the fact that something had been there that is now missing. 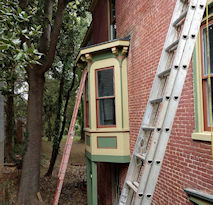 The Newmans have conducted a lot of the exterior restoration themselves. It was while they were hand scraping the old window frames that they found clues to the original colors used, and they have painstakingly returned those colors—rust, green and gold—to the trim and woodwork. The only other discovery they’ve made is the initials of a former servant, Ida Totton, who inscribed her name into one of the windows.

Though the Newmans are presently living in Greensboro, they look forward to being able to live in their Pine Street home, and we look forward to having them here among us.