For a number of years in the 1920’s, Danville was home to the Nanzetta Medicine Company. Here, with the assistance of his wife Anne, “The Great Nanzetta” produced remedies of every imaginable kind.

John H. Nanzetta made a brisk business in Danville. His first offerings included a worm remedy, the cost of which he would return to the purchaser if they would provide him with the parasite once it was expelled. Samples of these were displayed in his shop window at 219 Main Street, and included a specimen tapeworm that measured 65 feet in length. Other tonics were claimed to cure everything from rheumatism to baldness and claimed great fame in having done so for thousands of people. Among his talents was the pulling of teeth, which he declared to achieve “painlessly” and using only his bare hands. 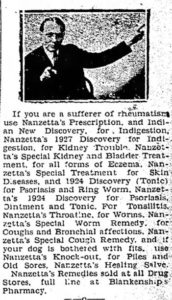 Though “Doctor” Nanzetta offered services in his Main Street location, his medicines were sold by local druggists, this way he could escape the licenses and fees that might otherwise have been required of him. Perhaps of all his talents, the greatest was evading the law.

Nanzetta began his career at the age of 18 as a street peddler, hawking the medicinal wares of companies like the “Oriental Remedy Company” and spinning yarns about his origins. His olive skin and dark eyes, and the black hair he wore very long (though some said it was a wig) offered him a natural disguise. He sometimes presented himself as a native American medicine man, at other times as a Hindu prince, more often, particularly in the beginning, he wove tails of his origins as a deposed prince of Mexico and a descendant of Montezuma.

Newspapers around the country announced the arrival of “Prince Nanzetta Pahassnee Montezuma, a strikingly handsome, black-eyed young man of 23, carrying in his hand a cane ornamented with the ancient insignia of the Montezumas—the eagle upon the cactus…”

Or, as another paper describes him: “His fingers were adorned with a dozen or more rings from which diamonds and opals gleamed and flashed as the restless hand brought them in contact with the sunlight. He wears on his vest a richly designed pin engraved with curious characters and he brings with him trunks enough to satisfy the most aspiring of actresses.”

Everywhere he went, he spun fantastic tales of heroism and tragedy that captivated audiences. To a room full of hotel guests, Nanzetta would relate the story of his exile from the land he was meant to rule. He was one of the last of a pure race of Aztec people who occupied “a little strip of country along the northern border of Yucatan and into Mexico”, where the sacred city of Gatamo holds 25,000 Aztecs (though they were sometimes Incas) and who had retained their purity by never allowing another race to enter its sacred gates. In one version of events his father had raised an army to avenge a massacre perpetrated by the Mexicans. In another, Nanzetta had fallen in love, but a Spaniard beguiled her and forced her to marry him. Nanzetta challenged him to a duel, where he, of course, was victor, and escaped with his life and a bounty of $1,000 on his back. These tails of woe and deprivation were absorbed so completely that fellow guests would offer to pay for his meals and even his lodging in some cases. In each of these towns he would hawk his medicinal wares until inquiries began to be made about his licenses, at which point he would pack up and move on to the next location. 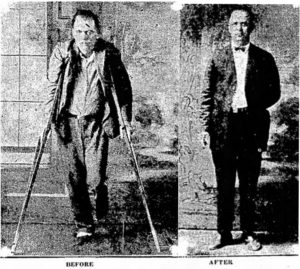 In 1903, while in Utah, and this time under the name Dr. John Van Santen, he met a young woman who was attending college in Ogden. The couple eloped to San Francisco, where they were married a few days later. They had not been husband and wife a full day when Nanzetta began to reveal that he was not quite what he had led her to believe. About the same time, she received word from her mother who was severely ill. She went home to care for her, and upon returning to California, found that her husband had turned his back on her and without a word of explanation. Realizing he was a fraud, and had probably married her under age, she sued for divorce.

In the meantime, Dr. Van Santen, had been arrested on suspicion of quackery and for operating without a license.

In 1913, in New York, he met Anna Love, and the couple married. But he was not done evading the law. Between 1913 and 1923 he faced several charges, usually involving permits and violations of medical licenses, but occasionally included other things like robbery and assault. Despite his having been at least partially, if not entirely at fault, in nearly every case he was released or outright forgiven. In one instance a charge of assault was overturned and the victim was handed the fine instead.

Nanzetta’s time in Danville, from 1923 until 1928, was mostly peaceful. The only legal entanglements he found himself in during his four-plus years was an altercation with a rival “healer” and the divorce from his wife for reasons of abandonment (hers). In December of 1928, the medicine man packed up his shop and returned to North Carolina, where he had maintained a factory and warehouses.

In spring of 1929, Nanzetta was hit with two charges, one being an 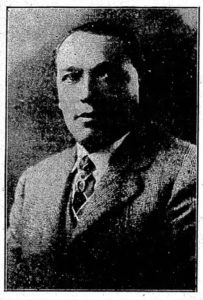 assault on a female employee, for which he was acquitted, and the other being failure to procure a license in Greensboro. In fact, the health authorities had begun investigating him as early as 1916. Now that he had returned to North Carolina, the case was handed over to the attorney general’s office. An investigation into Nanzetta’s history and credentials was pending.

Nanzetta fled the state and ended up in Baltimore, where, in 1930, he turned up at a hospital. It was there, at the age of 46 and in failing health, he took his own life. What his real name was we perhaps may never know, but John H. Nanzetta was no Aztec prince. He was just an ordinary guy, born in Austin, Texas to Jewish parents. In his will he left directions for authorities to investigate his death if there was any indication of foul play, but in truth, it’s more likely he simply couldn’t stomach the humiliation of having been discovered a fraud.