Ten years ago, if you had suggested that Craghead street would one day be a desirable location to own a business, much less to live, most people would have laughed.  “Crackhead” street, as it was disparagingly known, was a deserted part of town, filled with empty warehouses and storefronts, dotted with dark alleys where dark deeds took place.

Rick Barker, an Old West End resident and owner of Supply Resources, saw something else.

A native of Chatham, Barker came to Danville in 1987 and bought his first home in the Old West End.  “It was large, and it had a great deal of potential, but I never thought I’d stay,” Barker said of his Holbrook Avenue investment.  The house was purchased almost on a whim.  It was in foreclosure and headed to auction.  Barker looked at the property for about twenty minutes before deciding he would buy it.  Thirty years later, he’s still in love with the house, and with the neighborhood as well.

Looking back, Barker sees that his decision to buy the house has had a profound effect on him.  His experience instilled in him an appreciation for quality craftsmanship and for the value of hard work done well. But the neighborhood also gave him an appreciation for diversity.  The people who live here are not only diverse in their ethnicity and background, but in their levels of education, their economic statuses, their belief systems, and professions.  “Moving here, I’ve met someone from every stereotype I grew up believing in.”  And from those precious encounters, he feels his range of experience and of understanding has expanded.  “That which makes me a good neighbor makes me a better person, and a better businessman as well.” 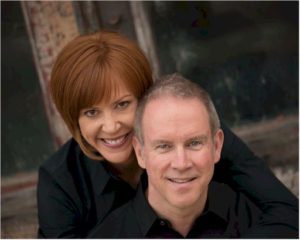 “In 2013, I married Kristen Houser, who grew up in an old house about ten blocks away, just off West Main Street. She especially liked my house and the Old West End neighborhood, now our neighborhood.  With my interest in Crema & Vine, and Kristen as the current president of the Danville Museum of Fine Arts & History, we are very active in the historic district.  And we enjoy being within walking distance to all of the River District amenities.”

Barker’s business, Supply Resources, began as a one-man entrepreneurial endeavor which he started out of one of the spare bedrooms of his Holbrook home.  A couple of years later, he opened a location on Craghead street.  In 2014, after years of planning and preparation, Barker at last bought their current location at 554 Craghead, formerly a hardware store that had stood empty for 50 years.  While people initially discouraged his plans to set up shop on Craghead, he saw something no one else seemed to: economic opportunity, combined with potential.  “We are going to have an impact,” he vowed to himself, and to the community.  “We are going to take this street and make it the most desirable area in the region.”

Today a great deal is happening on Craghead, with new restaurants, bars, Interior Design services, cafés, hair salons, and other high-quality services being provided.  The River District, once considered a lost cause, is quickly becoming a shining example of progress in action through revitalization. What happens in the River District has a direct effect on what happens in our other historic areas, the Old West End, particularly, for the two areas support each other.  Those like Rick Barker, who possess a sense of stewardship over Danville’s history and historic architecture, are the movers and motivators of Danville’s renaissance.