John Greene Lea was born in Caswell County in 1843. He served in the Civil War and returned home a staunch confederate and protector of the cause. In a deposition written in 1919, not to be released until his death, he recounted some of his dealings in Caswell County, those which made him a hero to some, and a villain to others.

In 1870, fellow Caswell resident, John W. Stephens, was a State senator and representative for the Republican party. He was appointed by Governor Holden, who was up for reelection. He was also known as a trouble maker, as he loudly and sometimes violently protested for the fulfillment of the rights promised to the freed slaves. When those protests turned to arson, Stephens became “odious to the people of Caswell.” Governor Holden himself uttered a wish aloud that something be done about him. There were those in Caswell ready to do it, too.

On the afternoon of May 21, 1870, a Democratic convention convened in the Yanceyville Courthouse. Stephens was drawn out of the meeting by a fellow constituent. He was led to a downstairs meeting room. There he was met by a dozen cloaked and hooded Klansmen, summoned there by John Lea. Stephens was strangled with a hemp rope, then stabbed in the neck and chest and left to die as the Klansmen unrobed and snuck away undetected.

Lea was later arrested along with several others suspected of Klan involvement. But so well-entrenched was the organization, and so tight-lipped its members, that no proof of the Klan’s existence in Caswell could be established. The trial was dismissed and all parties returned home. The Ku Klux Klan of Caswell County, organized by Lea, then under investigation, decided to disband.

Lea’s decision to come to Danville was likely influenced by the fact that his brother had an established tobacco business here, and one he joined as partner under the name of Lea, Anderson & Lea.

In Danville, Lea was known as an upstanding citizen, a true southern gentleman, and a contributor to Danville’s development. He supported the construction of Averett College when it moved to West Main Street, after which he served on its board of trustees. He also served as President of the Danville Tobacco Association and was on the board of trustees for the library, which he had helped established.

Lea married Nannie Thomas in 1876 and together they had seven sons, all of which followed Lea into the tobacco trade.

On September 11, 1935, while visiting the home of one of his children in Caswell, Lea received news that his son, Barnet, had passed away. John was so shaken by the news that he fell, breaking his hip. Within days he contracted pneumonia and on the 30th he passed away. 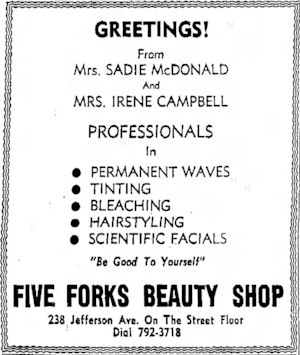 For the last twenty-five years of his life, Lea resided at 238 Jefferson Avenue. For many years, in the 1970’s-80’s, the house was known as the Five Forks Beauty Shop. The 2,300 square foot house is presently for sale (see the listing).