The Old West End’s secondary streets, like Green Street, are the site of an architecturally significant group of domestic structures that have suffered from lack of maintenance during a long period of economic pressure on the downtown area.  The houses, mostly single-family to begin with, were often subdivided into flats and apartments in the teens and 1920s.  The houses along Green Street, like those elsewhere in the district, remain in reparable condition, with some deterioration of exterior wood elements, such as porches, cornices with inset gutters, and window sashes.

The house at 860 Green Street is representative of the kinds of assets and issues encountered in the historic district.  This house is set on a conventional lot in the middle of the block.  It appears to be a well-built masonry duplex.  In reality, the form and history of the house are very complex.  Its original form was a two-story, frame, single-family home.

The house was converted into a duplex in about 1917 by making a two-story extension to the front.  The front section was brick and including a living room for each unit opening off the new front porch.  Internal stairs rose against the back wall of the living rooms to the second-floor bedrooms. The house then had a one-story, four-bay arched brick porch across the front.  A one-story rear wing was expanded to provide kitchens for both units.

Most of the interior of the original house was altered in its transformation into a duplex. New mantels with applied decoration and flanking pilasters were added in most locations.  The newer sections have a square, stepped profile baseboard, four-panel doors.  The earlier sections have beveled architrave trim and two-panel doors. The house features narrow, painted wood floors throughout.

At some point after 1920, the upper floors were converted into apartments.  To provide enough room, the rear wing was raised to two stories.  The interior stairs were removed.  Exterior stairs for the upper apartments extended into the front yard.  Later, a two-story porch with an arcaded brick first floor and a second supported on tapered square columns was added.  A stair on the porch then provided access to the second-floor apartments (see undated photo below). 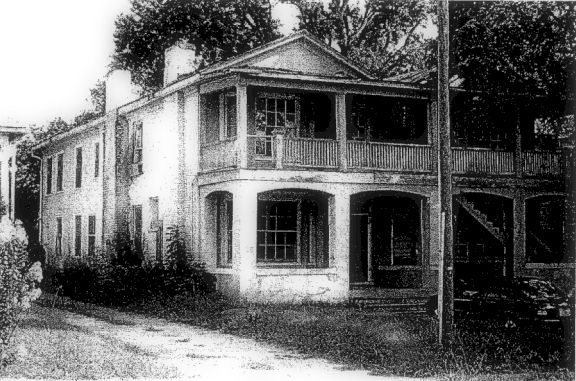 Incomplete renovations left the porch roof in a precarious position, supported only by temporary stilts until recently (see 2015 photo below). 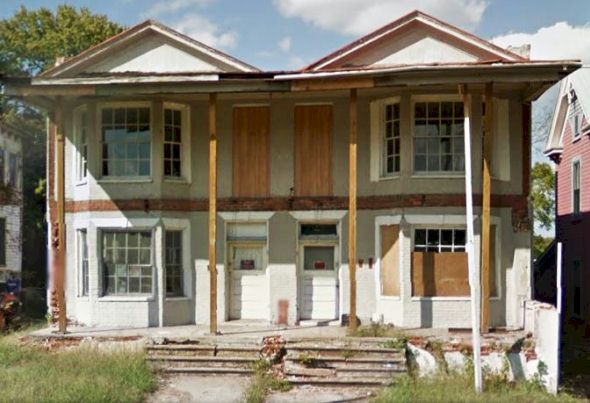 Currently, the porch has been rebuilt in a pleasing and compatible style (see top photo).  The building now consists of a two-story 6-course American-bond brick front section containing living rooms on each floor.  Immediately behind that is the frame section sheathed with brick veneer to match the front section. Both sections have exterior brick chimneys and cast stone jack arches with keystones. The front section has two-story polygonal bay windows flanking the paired doors to the separate units on each floor. The first-floor apartment on the northwest side has had the plaster stripped from the interior and an opening cut to the adjoining first floor unit.  The other apartments retain their plaster finishes.  There are presently no stairs on the interior.