Home
/
For Sale
/
Fixers with Report

All of the homes on this page have been studied by an architect to determine their best use and to create draft rehabilitation plans.  The architects’ reports are available on request below. 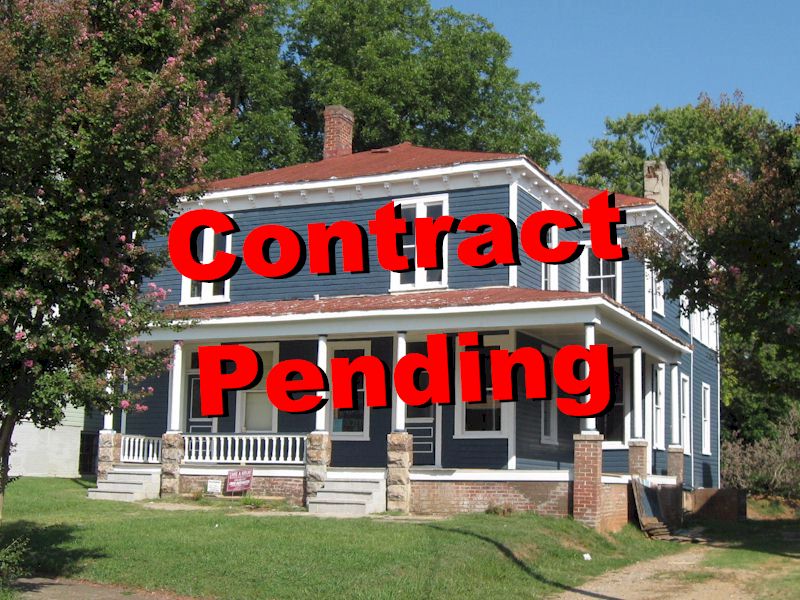 Initially constructed before 1877, the house began life as a smaller single-family home. Italianate in appearance with bracketed cornice and low hip roof. While once configured as a triplex, the additional exterior door leading to the second floor was recently removed to support use as a duplex with one small and one large unit. Draft architectural plans call for two townhouse-type units. The left unit could be made habitable fairly quickly while rehabbing the right unit as your dream townhouse.  The first floor of the right unit has been stripped to the studs. 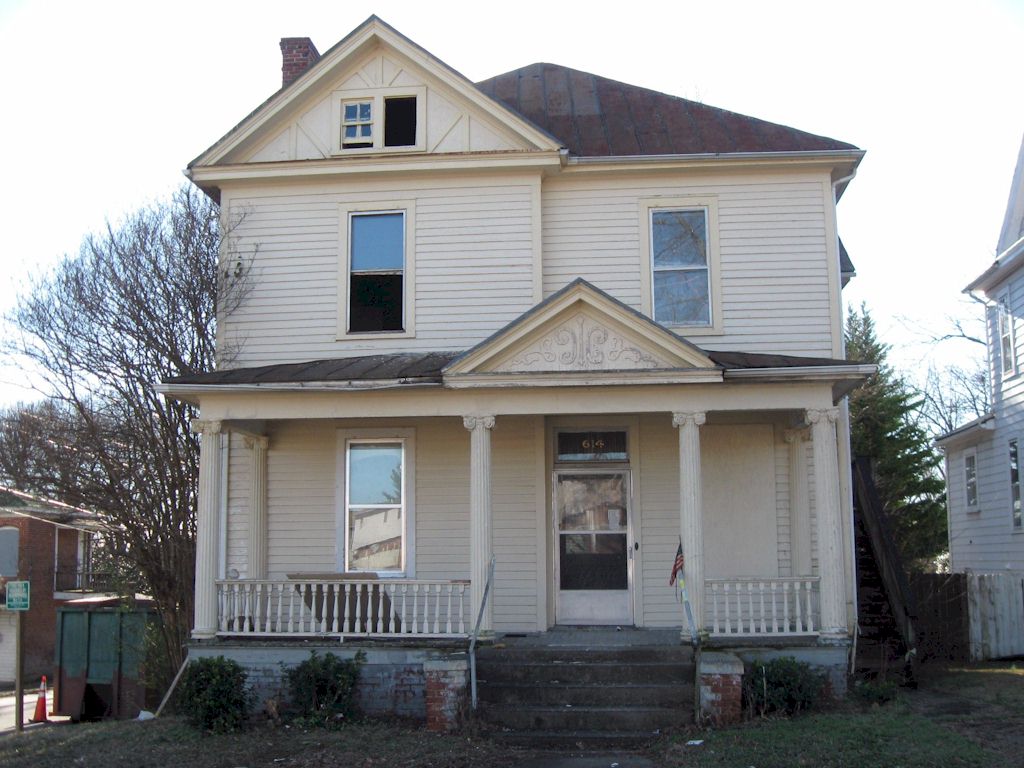 This stunning home was built between 1907 and 1910 for attorney William Leigh and his wife Louis Cabell Carrington Leigh.  Its prime location was in the 1902 subdivision called “Jefferson Estates.”  Mrs. Leigh was a distant cousin to her neighbor across Gray Street, Col. A. B. Carrington.  Both Mrs. Leigh and Col. Carrington were descended from Judge Paul Carrington (1733-1818), a member of Virginia’s House of Burgesses. In 1919, the widow Leigh sold the home to Dr. and Mrs. Perry Watson Miles.  In addition to his practice, Dr. Miles served many years on the local school board.  He passed in 1947.  His son, P.W. “Watt” Miles Jr., raised in this home, served in the U.S. Navy during WW II and founded a local newspaper — The Commercial Appeal.  Watt passed in 1973.

The property was converted to three apartments sometime before 1960. However, with much of its original trim and fireplaces intact, its return to an elegant single-family residence is underway. From 1980 until 2018, the home was owned by the Martin Donelson family.  This family was descended from John Donelson, a frontiersman, who co-founded Fort Nashborough — now Nashville Tennessee.  Martin Donelson Jr. was a physician and flight surgeon, well known within Danville’s pilot community.  Martin Donelson III was a local attorney, first opening Danville offices in 1976. 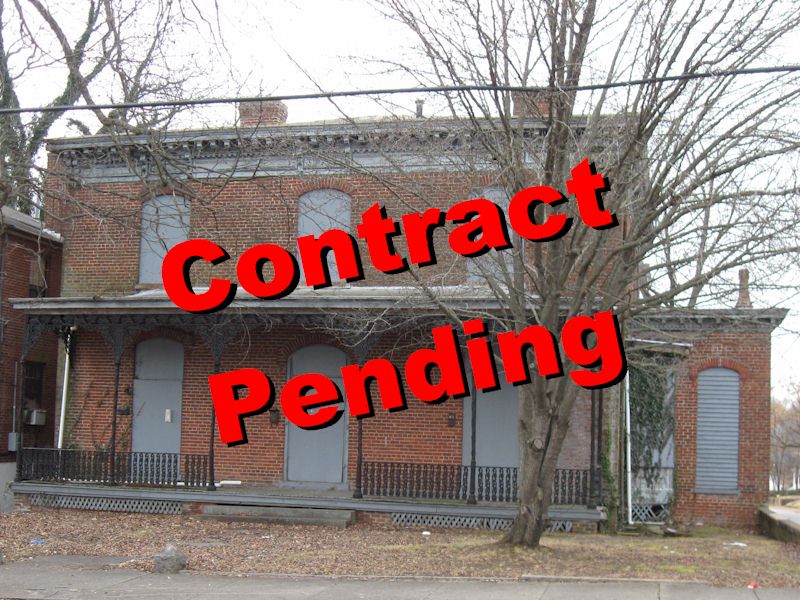 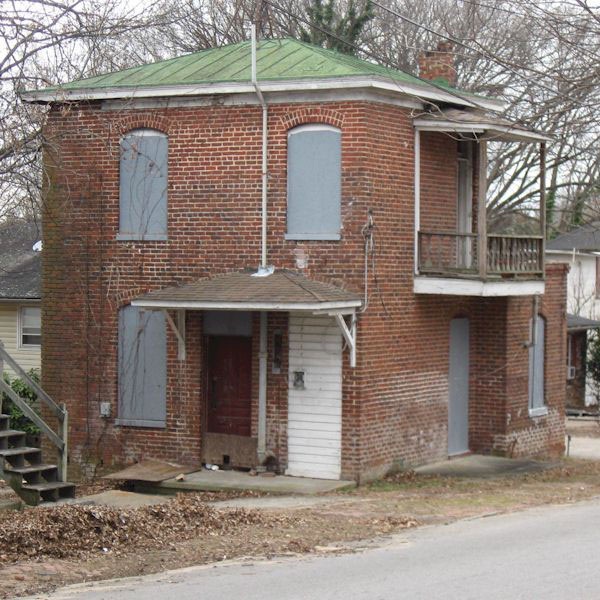 Featuring a cast iron porch unique for Danville, this home was erected about 1880. The first owner, Paul Venable, was in the leaf tobacco business. After residing there until 1898, he sold the house to his nephew, Col. A.B. Carrington – perhaps its best-known owner. Carrington’s title came from his service on the staff of governor Andrew Jackson Montague, the only Virginia governor to have lived in Danville.

the property was most recently used as four apartments. 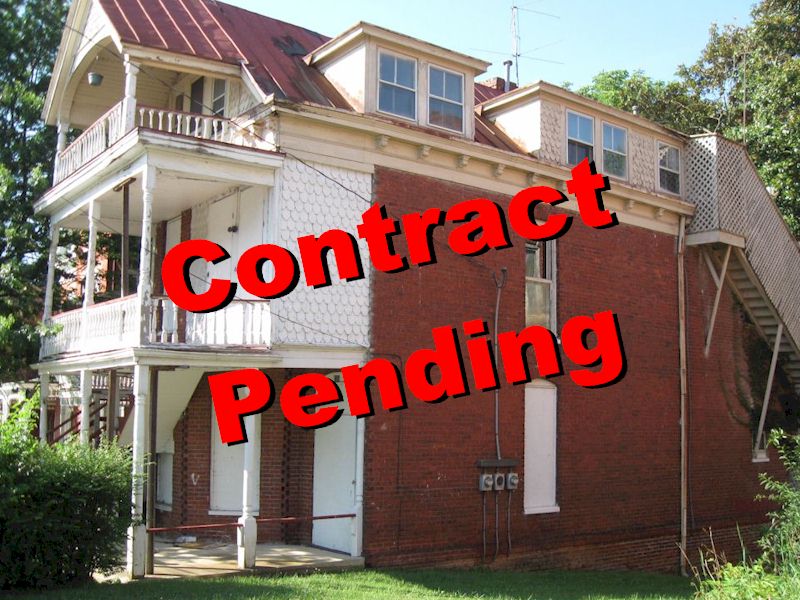 Underneath the façade alterations made to convert this building to a triplex is a beautiful single-family two-bay brick home. Built more-than-likely as a rental for Danville’s upper middle class, it once resembled its larger neighbors. 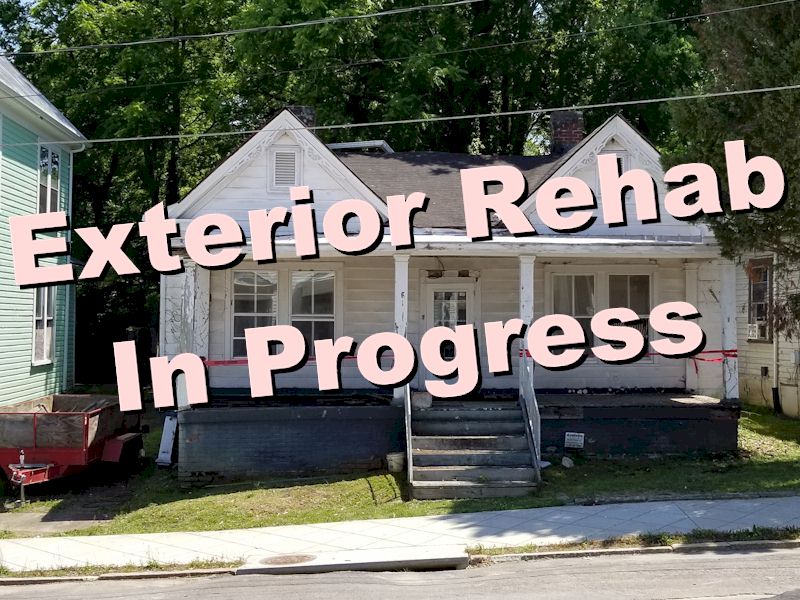 This one-story wood clad single family residence is in the Folk Victorian style. It features a front porch supported by square columns and gingerbread in its gables. This home was long occupied by a telegrapher for the steam railroad, with many other railroad employees as his neighbors. 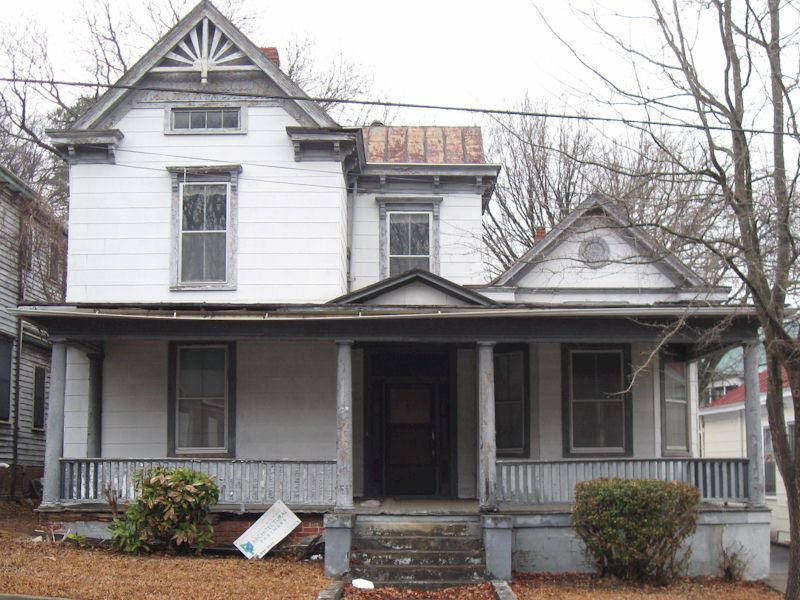 The house at 820 Pine Street is a Folk Victorian style two-story dwelling with cement fiber siding, concrete masonry unit foundation and a metal roof over a wood frame structure. The house was built around 1890 and was recently used as a group home. To accommodate more tenants, the house was enlarged over the years. Removal of those additions and a return to a single-family use is recommended. The original, small two-story home includes two upstairs bedrooms. Roof replacement may be required.  A large rear addition resembles a ranch-style home. This home was owned by the Pete Maurakis family from the late 1930s into the 1980s.  Mr. Maurakis was the owner of a downtown café. 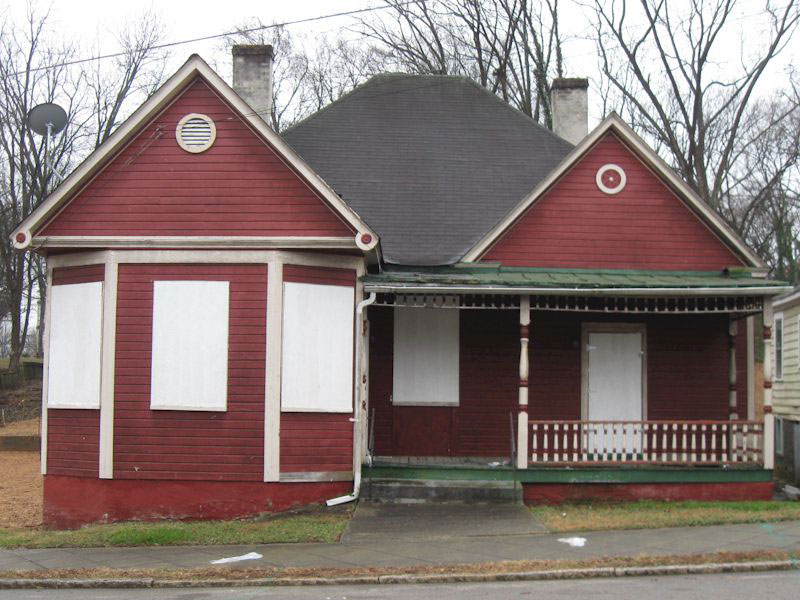 As with other cottages on Pine Street, this home is a wood clad example of the Folk Victorian style. Its front porch features turned columns. While addition have been made to the rear, the house retains its central corridor with four main rooms.  the rear porch will require replacement due to failed joists. 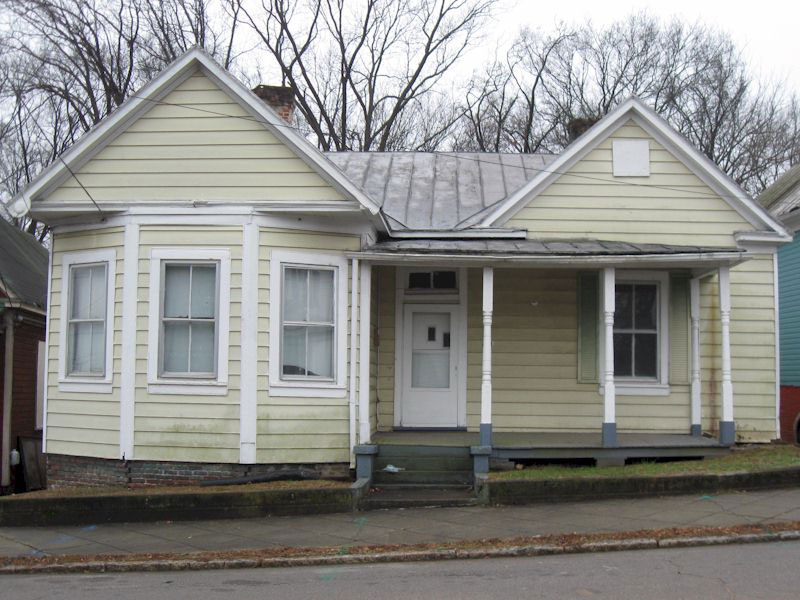 Very similar to 835 Pine Street, this Folk Victorian cottage was once the home of the last surviving Confederate veteran in Danville, Mr. A. A. Moore, who lived here from the 1920s until his passing at age 93 in 1939.  The building is in fair condition requiring full replacement of a rear addition with a failed beam and floor system. 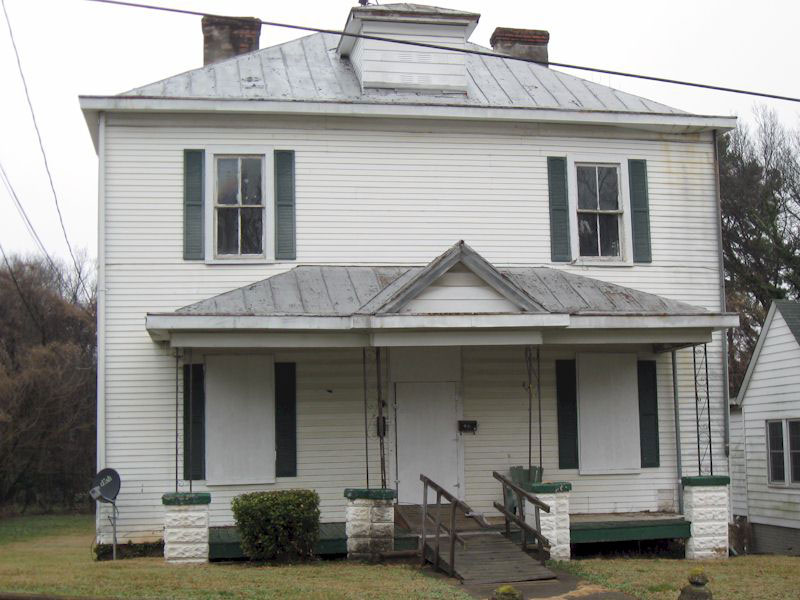 This American Foursquare two story residence metal siding and a metal roof over a brick foundation. Built before 1900, it was most recently used as a multi-unit dwelling. The removal of rear additions and a return to single-family use is recommended. Occupied by the Longwell family from the outset into the 1940s, son Eugene was an employee of the New York Times. 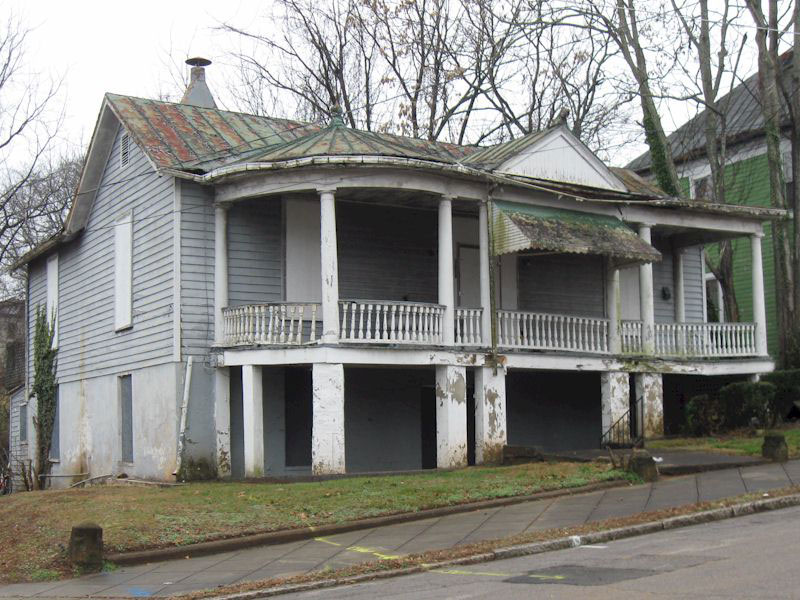 This raised Folk Victorian cottage is replete with Queen Anne-inspired details. This is especially evident on the front porch with its turned balusters, Tuscan columns, and side turret. Another notable feature is the front door with sidelights and a front-facing gable with copper finial. Inside, the house retains its historic plan, hardwood floors, decorative plaster cornices in the entrance hall, and two intact fireplace mantels. This home was in the Prescott family from 1906 into the 1990s.  At one time, the Prescotts rented potions of the house to three other families. 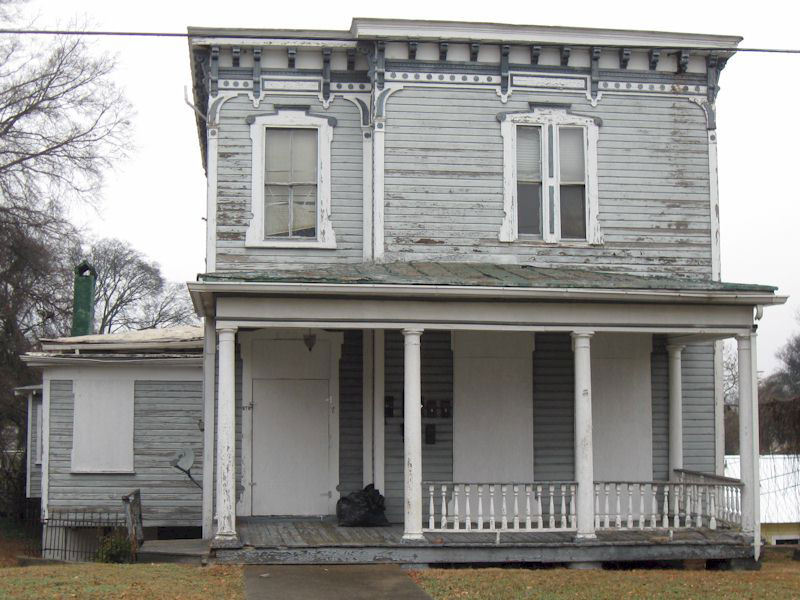 In This Old House Magazine

A fine example of the Italianate style, the cornice of this home is especially ornate with a frieze featuring sawn panels and sunflower motifs. The corner boards curve into large brackets. The exterior also includes a double-leaf entry with a transom and decorative sawn surround as well as its two-over-four full-length windows on the porch. Built for John W. Carter, Sr., between 1883 and 1888.  His heirs sold the house to James A. Stone in October 1920.

This smaller home incorporates many Queen Anne details.  The running-bond brick walls are topped by an unusual curved bracket cornice with an inset gutter.  The unusually steep gable roof is covered with standing-seam metal. The house has one-over-one windows with splayed jack arches and an arched main doorway.  A gabled section containing a wide triple window projects to the front, giving variety to the form of the building.  Beginning in 1908, this home was occupied by the Fred W. Chaney family.  Fred passed in 1935.  His widow Stephie Lee stayed on until her eviction by a new owner in 1946. The exterior of the house was recently painted.  Substantial repairs needed to roof and rear addition. 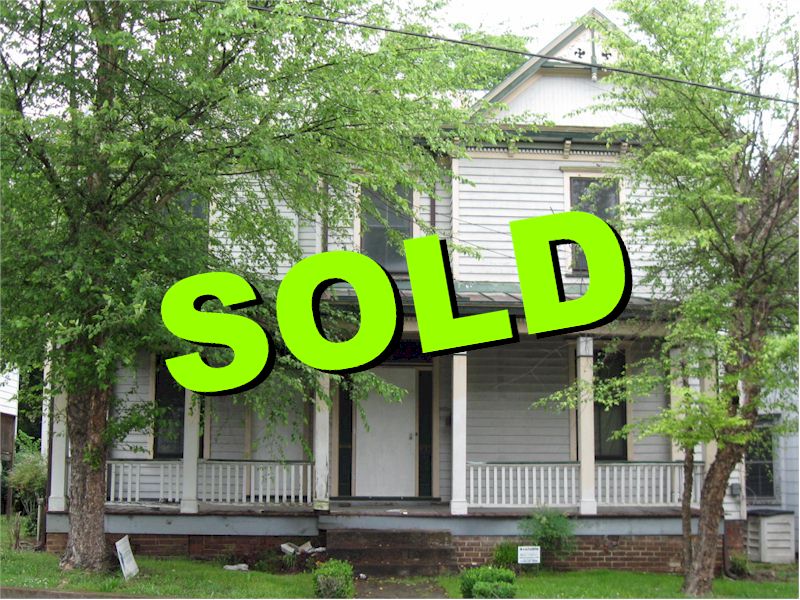 The house at 830 Pine Street is a Folk Victorian style two-story dwelling with wood siding, brick foundation, and a metal roof over a wood frame structure. The house was built around 1890 and has been used as a multi-dwelling unit and as a fraternity house. Removal of additions and a return to a single-family home is recommended. 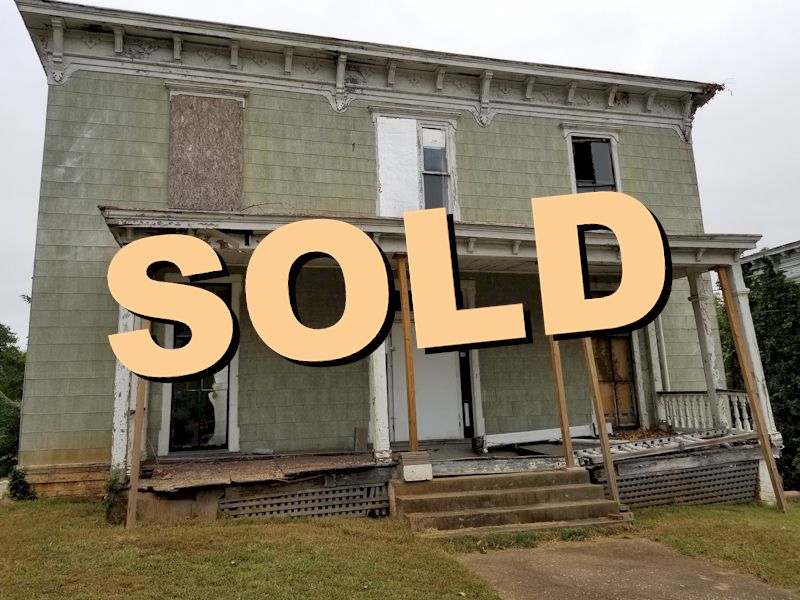 Of Italianate style, this two-story dwelling was built around 1880. It was most recently used as a multi-unit dwelling, but its return to a single-family residence is recommended. 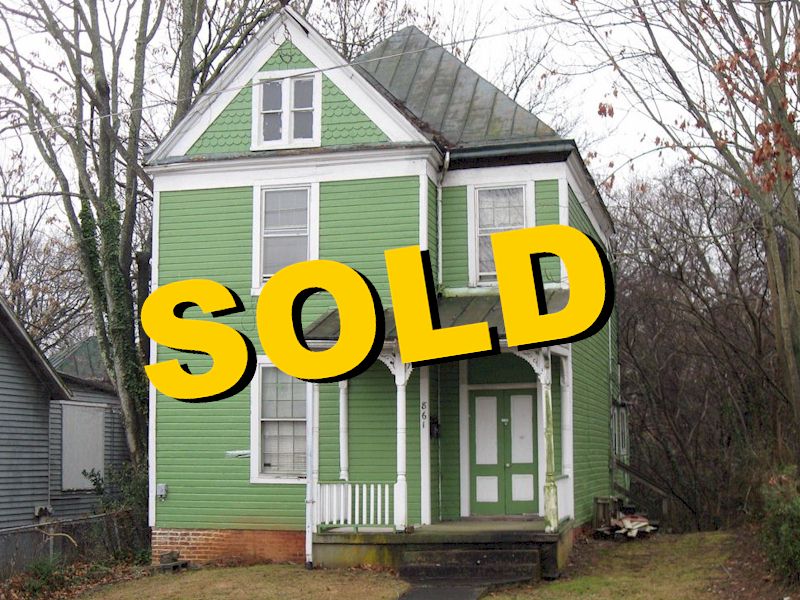 This two-story wood clad single-family residence is an example of the Folk Victorian style. The building features a front porch supported by turned columns. The original structure consists of a stair corridor along the right side of the building with 4 main rooms adjacent to the corridor. The rear addition currently consists of a bathroom, kitchen, and a bedroom on the first floor and a bathroom, kitchen, and balcony on the second floor of the house.  The second floor bath is structurally unstable and must be removed.  The home’s return from a duplex to a single-family residence strongly recommended. 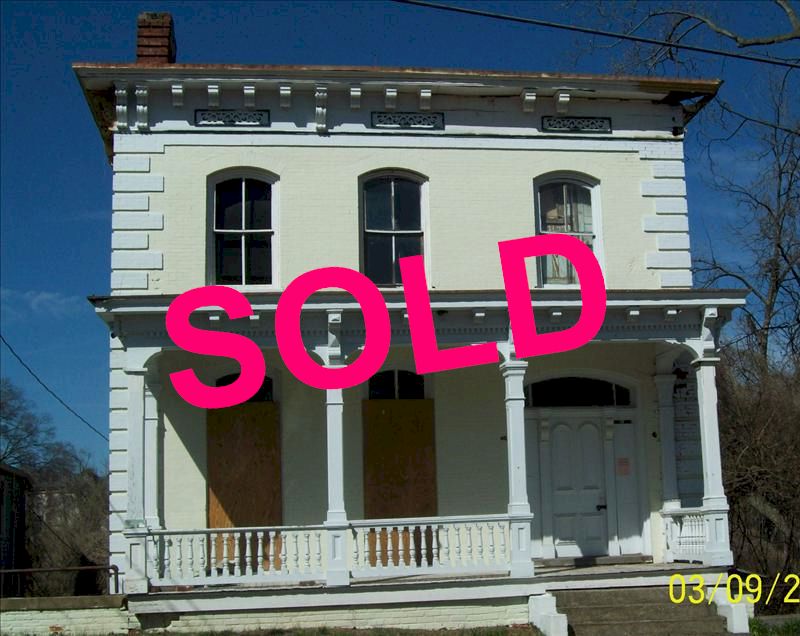