In 1908, The Times-Dispatch of Richmond began a special Sunday supplement to their newspaper called the Industrial Section. This new section promised “Profusely illustrated articles on the Development of Virginia and North Carolina Towns and Cities.” On May 3, Industrial Editor Frank S. Woodson wrote extensively of Danville (about 4,700 words) after a sojourn here. As a summary of the article he titled “When Tobacco Was King,” he wrote:

There is probably no town and all the Southland that is known in as many cities and centers of trade as Danville, the story of this busy Virginia city have had been carried in every part of North America, Europe, Asia and Africa and all the Isles of the sea by the rapidly flying birds of Commerce. Bright tobacco goes direct from Danville to every commercial center of every country in the world where tobacco is used; cotton goods go from the mammoth factories of Danville to all foreign parts; elevators made in Danville go all over the southern sections of the United States and to Cuba and the Philippines; wagons and trucks made in Danville find their way beyond the waters; flour that has been ground in the unsurpassed mills of Danville is sold from the Potomac to Florida; overalls, working men’s shirts and other like apparel made under union label in Danville are sold throughout the South and in Cuba, and the same may be said of Danville made furniture; the drummers from the wholesale stores of Danville sing the praises of their city in many states and extended businesses of the banking houses of Danville in handling the funds, checks, drafts, etc., of all these worldwide traders put them in correspondence with bankers and businessmen of every tongue; hosiery and all manner of knit goods manufactured in Danville are sold in many parts of the world, and electric railway experts come to this city from all parts of the country to examine and try to copy after what is declared by numbers of them to be the best electric railway systems in the country.

The article mentions many of the businesses and businessmen familiar to Old West Enders. They often lived here.  And it tells of the new western developments at Schoolfield and Mountain View.  The full text of his article has been transcribed and is available here. 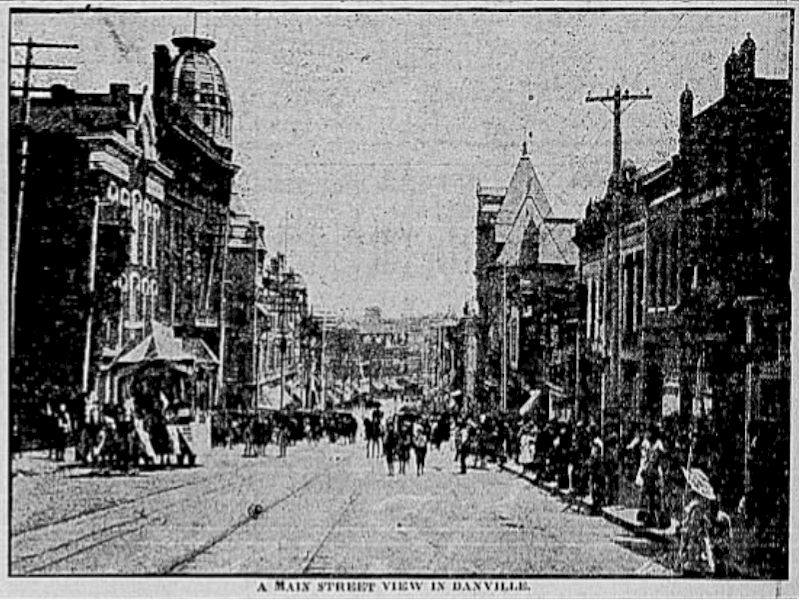