Cody Wade found his way into architectural salvage and rescue when he happened upon a house in Yanceyville that was scheduled to be burned by the fire department. The 1830’s home featured mantles and woodwork made by Thomas Day. He was so excited to learn of the history and significance of the items he saved that he began searching out other houses from which he might rescue historically and architecturally significant items.

“I’ve always had an interest in antiques and history,” he says. Rescuing historic homes and their irreplaceable architectural appointments has become a passion. 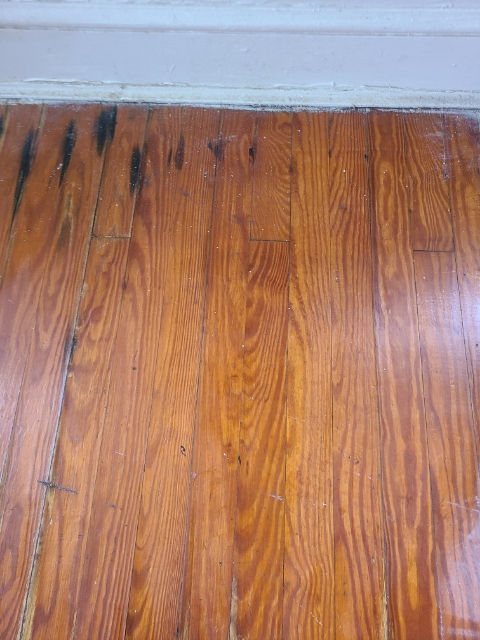 Cody worked independently in the architectural salvage business for nine years before meeting Michelle Rose Bowers last summer. Her involvement in rescuing a historic home in Vance County, North Carolina led to a call out for volunteers. Cody sent Michelle a message and asked if he could help out. He showed up and kept showing up, and before long Michelle offered him a job. In time, she became interested in a restoration project of her own, and Cody suggested looking in Danville.

While working with Michelle on Sunshine Cottage, Cody began looking for a project for himself. He first went to see the Goodwin-Spear house at 835 Pine Street soon after arriving in Danville. He saw the potential in it then, but it wasn’t until he visited several other Old West End homes that he realized the unique nature of this cottage. None of the other homes spoke to him the way this one did. The high-Victorian fretwork on the porch, the unique moldings and woodwork, the floors which have been miraculously preserved, all jumped out at him as details that have been lost in too many houses and which needed preserving here. 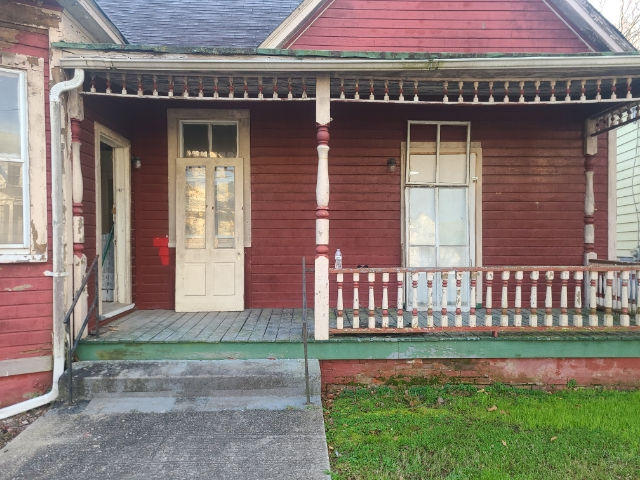 The house, built originally on a central hall plan, was divided into a duplex shortly after World War Two. Cody looks forward to returning it to its original configuration. Upon seeing the house, he had the idea that a jib window should replace the second unit entrance on the right of the façade. After doing some research, he found that just such a detail was actually part of the original construction of the house. This seemed to him to validate his feeling that his understanding of the home’s inherent nature qualified him uniquely for the task of restoring it. Other improvements on Cody’s agenda include replacing the present front door with one that was salvaged from a building recently demolished on Wilson Street and windows that were rescued from a demolition on Pine Street (where several items were salvaged for use in Michelle’s homes, Sunshine Cottage and Moonlight Manor). It’s his intention that the entire restoration will be accomplished with items salvaged and sourced locally.

Cody isn’t new to the area. His family settled in Caswell County some time in the 1700’s, and he himself has lived in Danville before. From 2011 to 2014 he lived in the Windsor Heights area. Back then he would have thought twice about living in the downtown area. Chestnut and Pine Streets were really rough, and there was a general consensus that the area was unsafe.

“I didn’t really have the best opinion of Danville when I was here before,” he told us. “My opinion has 100% changed, and it’s really all about the Old West End. Just the camaraderie, the single-minded ideal that everyone has to restore these houses and return them to what they once were, has built such a sense of community that is really fun to see.”

That sense of community is something that really means a lot to Cody. “We all have each other’s backs,” he says. Everyone is helping each other, it seems, whether it’s a construction project or research or helping to hunt down something that’s gone missing. Cody makes a habit of driving around the neighborhood each evening, just to make sure all is as it should be before retiring each night. “That’s what part of building a community is about,” he says. “Here in this neighborhood I’m seeing something that you don’t really see anymore.”

When asked what advice he’d give to someone contemplating purchasing one of the neighborhood’s endangered homes, he said, “Take your time, breath, and mull it over. The house has to speak to you.” Once the house is yours, he went on to say, there are times where it’s going to see overwhelming. “That’s part of doing what we are doing. We are saving these houses for ourselves, but really, in the grand scheme of things, we are saving these houses for history. There will never be another era of home building like there was when these homes were built.”

I think Cody’s advice is particularly appropriate now, and perhaps in more ways than one. Whether it’s pertaining to a complete restoration project, a home improvement project on a smaller level, or simply navigating life during a time of Covid, his council is sound. “Don’t get overwhelmed. Lean on your neighbors. We’ll get through it together.”

Welcome back to Danville, and to the Old West End, Cody Wade. We are excited to have you!