G. Carter Glass was a Lynchburg newspaper man and politician. He was elected to the Virginia Senate in 1899 at the age of 41 and was a delegate to the Virginia constitutional convention of 1901-02. The 1902 Constitution implemented a poll tax, making voting difficult for poor people including many African-Americans.  When asked if this wasn’t discriminatory, Glass replied, “Discrimination! Why that is exactly what we propose. To remove every negro voter who can be gotten rid of, legally, without materially impairing the numerical strength of the white electorate.”

Glass went on the he U.S. House of Representatives in 1902.  In 1918, President Woodrow Wilson, another Virginia-born segregationist, appointed him Secretary of the Treasury.   At the 1920 Democratic National Convention, he was among the nominees for President.  That same year, he was appointed to an unexpired term in the U.S. Senate.  While he was offered the post of Secretary of the Treasury under Franklin Roosevelt, Glass continued in the Senate for 26 years until his death in 1946.

In 1923, during his time in the Senate, Glass built Montview Mansion in Lynchburg.  Montview was purchased by Liberty University in 1977 and served as the executive offices for Dr. Jerry Falwell. The mansion has been restored and is available for tours.

Carter Glass had two sons and two daughters with his first wife, Aurelia Caldwell. After her passing, he married again in 1940 at the age of 82 to Mary Scott, she being 54.

The senator’s older daughter, Mary Archer Glass, was born in 1895.  She attended Gunston Hall, then the premier Washington school for young ladies.  In October 1919, it was announced that Mary would marry John Guerrant Boatwright, a returning WW I serviceman and resident of Danville.

John Guerrant Boatwright was the second son of Herbert Lee Boatwright and his wife Mary Elizabeth Vaughan.  He was named for his grandfather, a physician and Confederate surgeon.  John remained close to his parents – after John and Mary were married, they lived with his parents at 904 Main Street.  Their oldest son, Robert McDearman Boatwright, was born in his father’s home in 1920.

In 1930, John and Mary began restoration of Dan’s Hill, a Federal-style antebellum mansion above the river west of the city.  Dan’s Hill is listed on the National Register of Historic Places. 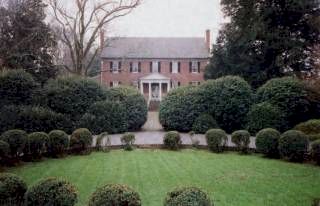 John followed his father in the tobacco business, ultimately rising to the presidency of Dibrell Brothers.  Mary contributed to her father’s Lynchburg newspaper business.  Both were active in Danville community affairs including the founding of the Danville Museum of Fine Arts and History in 1973.  The Boatwright Gallery there is named for their family.