In the mid to late 1800’s, religious revivals drew crowds in the thousands to Danville. Local and nationally known evangelists arrived here to speak, and room to hold the throngs that gathered was difficult, at times impossible, to procure.

To resolve this difficulty, seven churches collaborated to raise funds to build an auditorium. In 1890, architect J. R. Pleasant built the 150 by 125 foot wood frame structure on North Ridge Street — just a few steps from the Old West End. The building was named the Sam Jones Auditorium after the acclaimed preacher who held regular and well-attended revivals in town, but was more commonly called the Tabernacle. The building was erected over a ravine across from Spring Street at the bottom between the two hills there (now the location of Edwin Court). 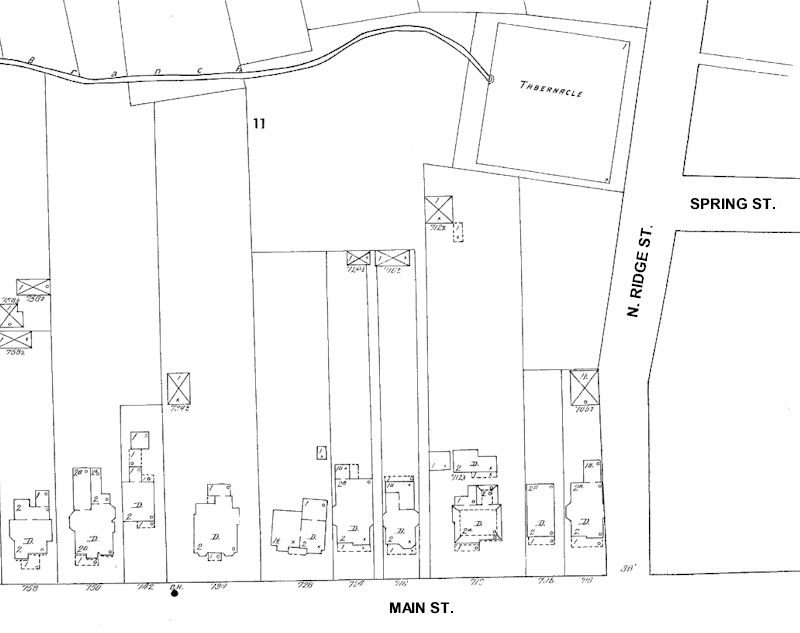 Of the notable evangelists and speakers who preached and lectured here were Mordecai Ham, whose revivals were a staple of Danville religious life in the late teens and early 20’s, according to Adrian O’Connor in River City: Stories of Danville. Mel Trotter, the first week of each October, held a revival there where he would “awaken the echoes” (as Mr. O’Connor puts it) before overflowing crowds. Nationally revered preacher, Billy Sunday, whose enunciation “was like the staccato of a machine gun,” as the Bee described him in 1922, would bring as many 6,000 “eager listeners”.

In 1929 there was something of a controversy when Rev. Thomas F. Pardue wished to host a revival there. Two years earlier he had been a witness in a murder investigation when a woman, Alma Gatlin, confessed to murdering her father and burying him in her basement. During the trial it was revealed that Rev. Pardue had been a bootlegger prior to his “conversion.” He met opposition with his request to use the Tabernacle and, when directed to take his petition to certain others of the trustees, declined to do so.

William Jennings Bryan and Calvin Coolidge held political rallies at the Tabernacle, and, during World War One, the building became a central rallying location for the community, where they would gather to build morale and offer support for the families of those whose sons and brothers and husbands had gone to fight in the trenches. Such secular use of the building ended just prior to the strikes at Dan River Mills, however, when the rules were changed to allow for only religious activities.

For a period of time in the late 1920’s, Cabell Street Methodist church used the building for their regular services while their new building at the corner of Berryman Avenue and Colquhoun Street was being built. The new church would become Moseley Memorial Methodist Church.

The large building stood for nearly 40 years and was considered to have been immensely influential in religious life. In 1931, the building was deemed unsafe. Dry rot was found to have destroyed supporting joists, and it was feared that if the usual crowds were to gather within, they might very well fall through the floor. The trustees elected to sell the building, hoping for a price of $5,000. They got a little over half that when Dr. S. E. Hughes purchased it for $2,575. It was his plan to tear down the building in order to relocate two houses situated on the lots where the new post office was to be built.

*Thanks to Elizabeth Stilwell Russell for providing the photograph. The photo came from her private collection, her family having lived on Ridge Street for many years, and may or may not be of the tabernacle.