Luke Ramsey has wasted no time in the restoration efforts on the Clarke House at 218 Jefferson Avenue. (Read the previous blog posts on the history of this house, and about the home’s recent purchase.)

Among the first and most important of the tasks that required tackling was the leaking roof. Luke found that the majority of the roof’s problems were in the valleys. After replacing the metal in those areas, as well as the flashing around the chimney, soldering nail holes, and repainting, the roof is now leak free. His team also spent some time replacing the gutters and installing new downspout outlets. 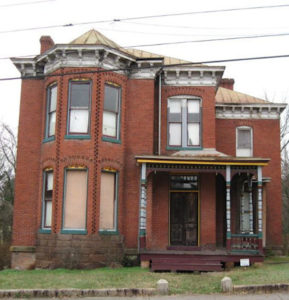 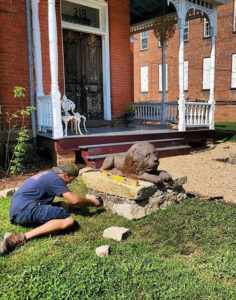 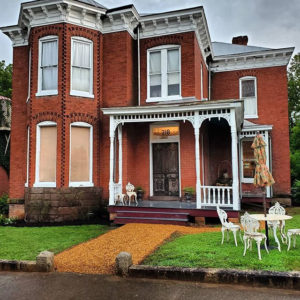 With the house dry, plaster repair could begin. Luke and his team tackled one room at a time, beginning in the front parlor, where he focused on creating a welcoming sitting area, where he could meet visitors who might come to see the house, and where he, too, could getaway from the mess consequent of repair work going on in other parts of the house. After the front parlor was finished, he moved upstairs where he began repairing the plaster and painting the front bedroom. A bathroom on the second floor was also repaired so that the house had at least one fully functioning bathroom. With these tasks done, he was able to provide a comfortable place for himself and his family to stay while working on the house. 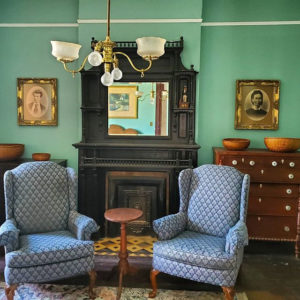 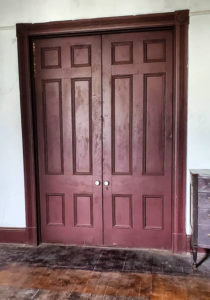 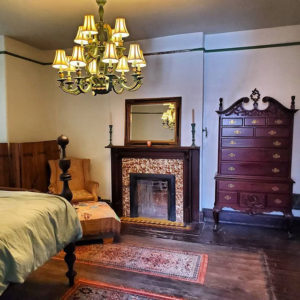 Next Luke and his team moved into the dining room. This room, Luke feels, was probably used as an office by Mr. Clarke, a local druggist. His reasoning makes sense, as the walls of the room were coated in nicotine, as was the glass of the built-in china cabinet (you can see the difference in the two doors in the photo below) as well as on the mirror of the overmantle and on the glass of the light fixtures. As for the walls, the Luke used high-hiding primer to cover what was left after plaster repair and sanding. Removing the nicotine tar from the glass required razor blades and considerable elbow grease. 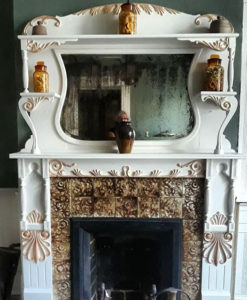 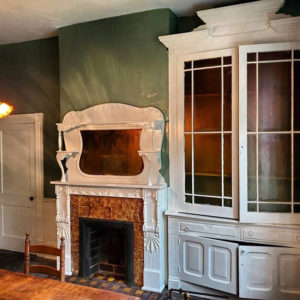 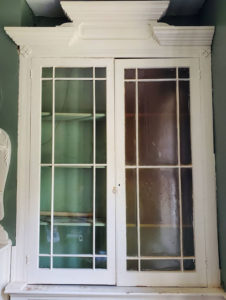 In most of the rooms, the walls had to be scraped of wallpaper before plaster repair could begin. In the hall, however, the papers had already been scraped. Ironically, it was here, beneath a patch made in the plaster on the ceiling, and behind the light fixtures, where Luke and his crew discovered some scraps of what was probably the original wallpaper. They were almost thrown out with the removal of the failing plaster and previous repairs, but were rediscovered when a light rain washed away the plaster dust and loosened it from the old plaster. To his good fortune, he was able to remove these scraps of wallpaper from the old plaster and preserve them as inspiration for future repapering, when he’ll studiously select some period appropriate papers and patterns. Luke was also able to locate some old photographs of the Clarke family, including one of Mrs. Clarke, which was found in the house, as well as others discovered from various sources. These have been framed and hung in honor of the family who built the home and who maintained it for so long. 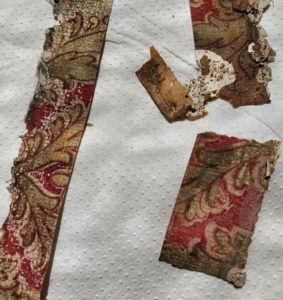 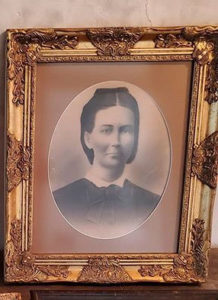 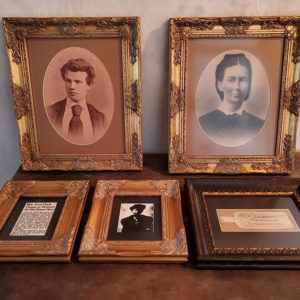 In the hallway, extensive plaster repair was required. Large portions of plaster were missing and were replaced with backer board that was then covered over with a top coat. In other areas, the cracks were dug out and filled back in. The hall was then painted, including the trim. In all cases, Luke tried to use colors that were already existent in the house. 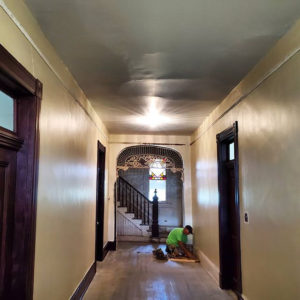 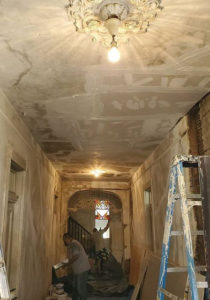 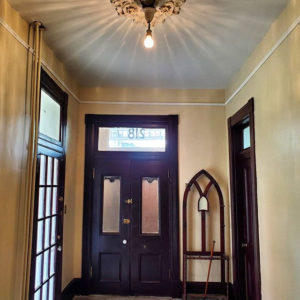 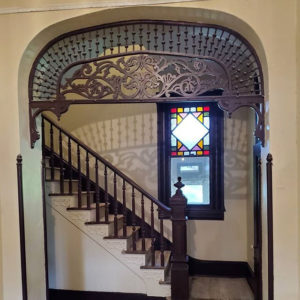 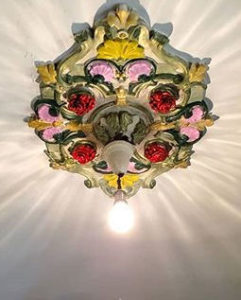 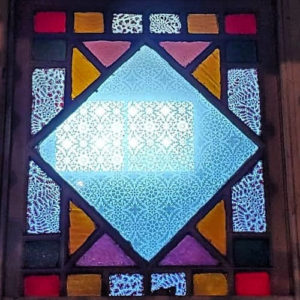 Other major repairs have included replacing a summer beam beneath the study and west wing bathroom, replacing rotten and water damaged flooring and the joists supporting those floors. In attic, there was a place that had been so severely damaged due to water that it had to be jacked up and reframed. Dormer windows and sills were replaced in the attic as well. On the porch, floor boards and joists were repaired or replaced where necessary, and the multi-colored trim was replaced with a more appropriate-to-the-period white.

There’s still a lot to be done, but progress is certainly being made. Luke has spent a lot more time here than he had at first anticipated. “It just feels great to be in the house,” he says. Instead of serving as a second home for weekends and holidays, it’s really taken on a greater significance for him and his family. “I don’t think I’ll ever sell it,” he said. He is also really enjoying being in Danville and sees a real opportunity here to invest, not only in a piece of architectural history, but in a community. Besides making fast friends with neighbors like Tina Cornelly, he’s also bringing friends of his own to Danville, where they, too, have chosen to get involved the neighborhood’s revitalization efforts. 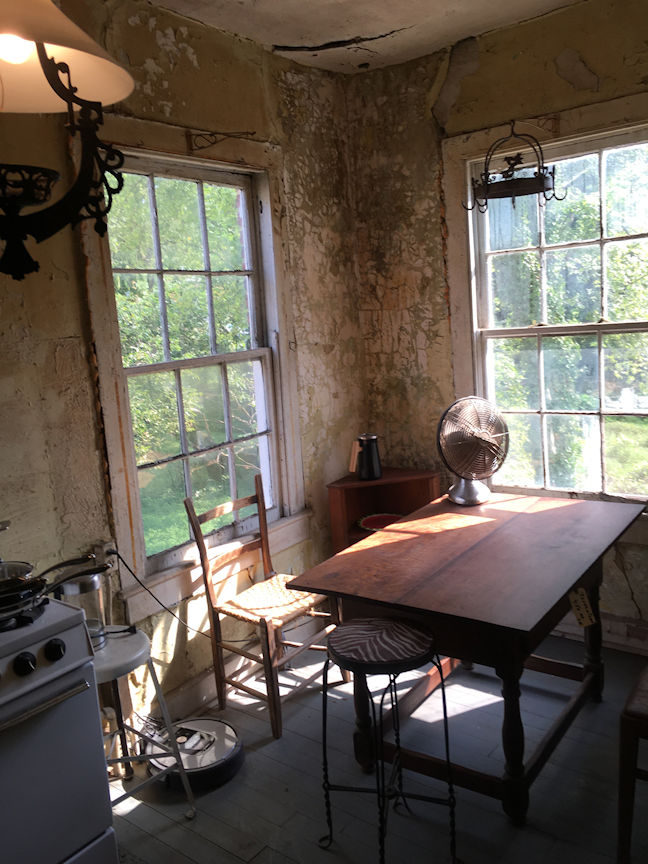 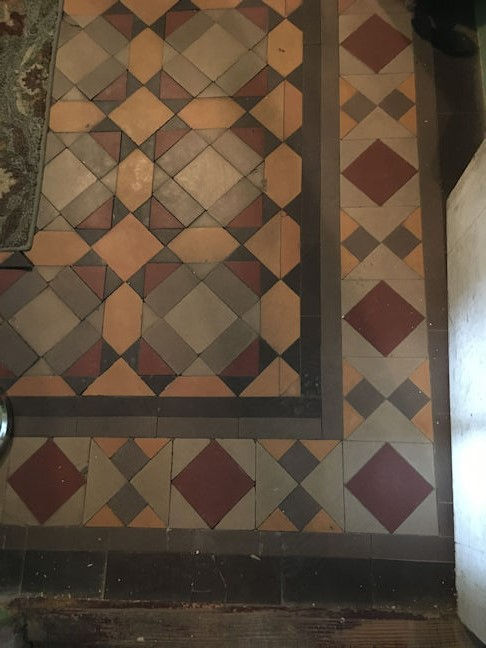 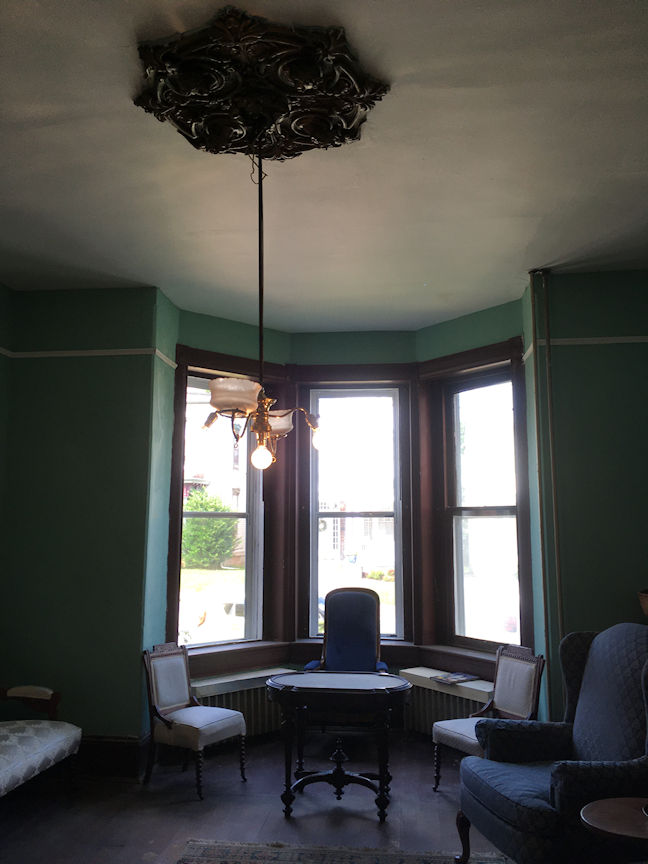 Luke not only enjoys the home for himself, but he looks forward to sharing the house with the community, as well. Earlier this month, he and his father held an antique furniture sale. It was well attended with many coming just to look at the house, and others coming to shop. Proceeds from the sale were used to buy furnishings for the house that were more appropriate to the period than what he had brought with him already. He hopes to have more sales in the future, as well as providing other opportunities to show the house and its transformation.