Major changes are taking place at The Chaney House, 124 Chestnut Street.  Dubbed Sunshine Cottage by its new owner – old house maven Michelle Bowers – we recently stopped by to take a peek at the transformation.

The restoration of Sunshine Cottage began with foundation work. Built onto a rise of land on the west side of Chestnut Street, additions to the rear of the house were built in close contact with the ground, and the kitchen, in consequence, was being washed away by water shed from behind the house. 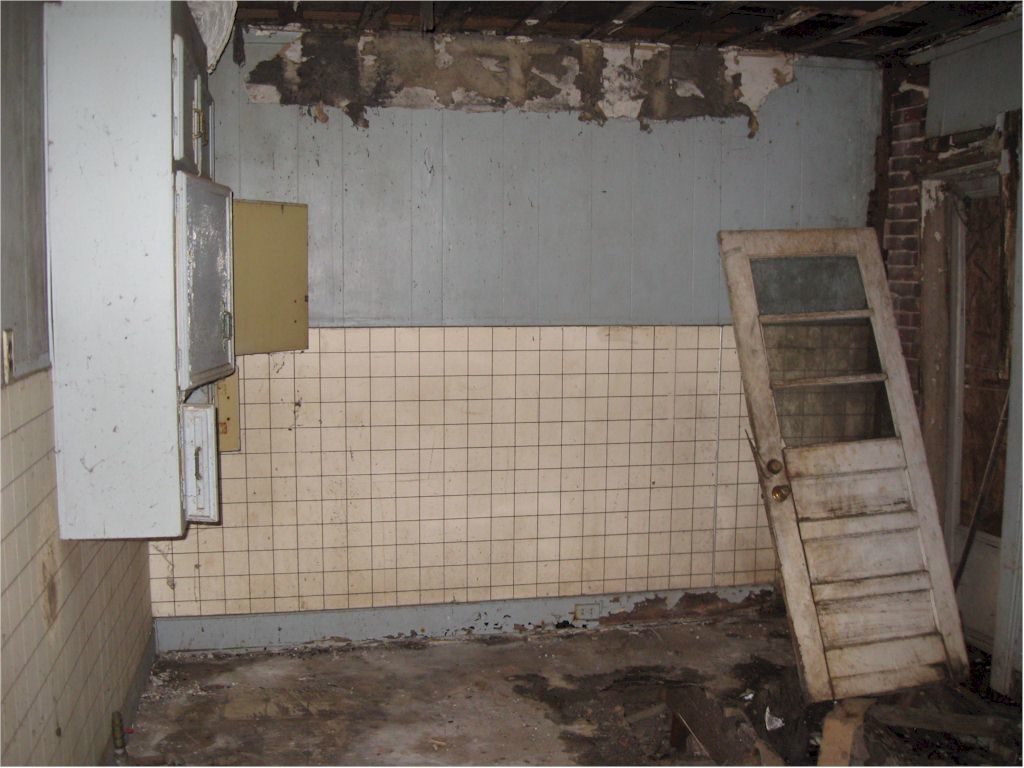 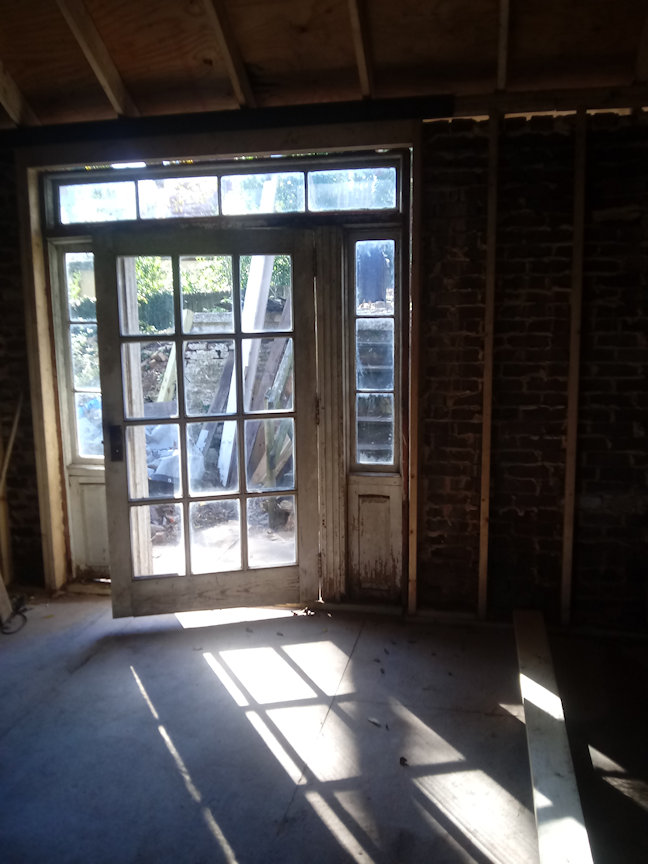 Foundation work was necessary to prepare the kitchen for reframing. To provide for more light and better access to the back yard, a larger, twelve-pane door with sidelights was installed. The door was salvaged from a stagecoach stop in Caswell County that was slated for demolition. Several other treasures were pulled from this home, as you’ll soon see.

Foundation work was also necessary to shoring up the brickwork on the exterior curtain wall, and preparing the rear addition for a new roof. As the back yard with its retaining wall, prevented access by excavating machinery, Michelle employed neighbor and friend Luke Ramsey to dig out the basement by hand. 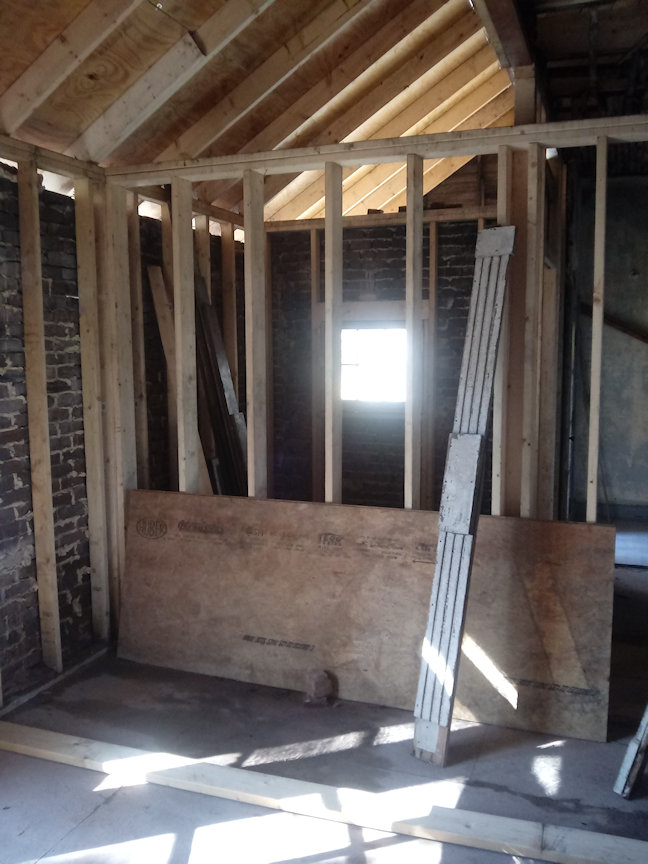 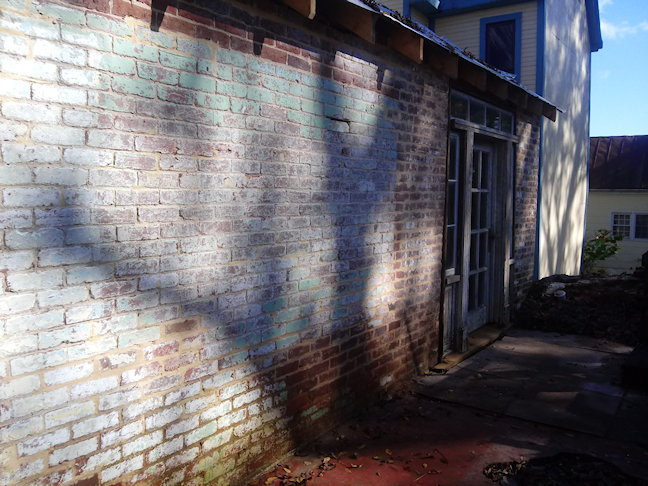 Since the roof was being reframed and rebuilt on this part of the house, Michelle elected to vault the ceilings in the kitchen (shown on the left looking toward the new bathroom) in order to provide for more light and visual space. Other living space formerly (and somewhat roughly) added to the rear, including a pantry and bathroom (the foundation of which can be seen on the photo on the right), were removed to make for easier access to the rear of the house. Removal of this addition exposed a rear side porch that is in the process of being restored. This door, too, was salvaged from the stagecoach stop in Caswell.

Off the kitchen, where the old pantry was situated, a new bathroom has been framed in. A transom window salvaged from the recent demolition of a house on Jefferson Avenue, as well as a Richmond farmhouse sink salvaged from the Caswell county stagecoach stop will be featured here. 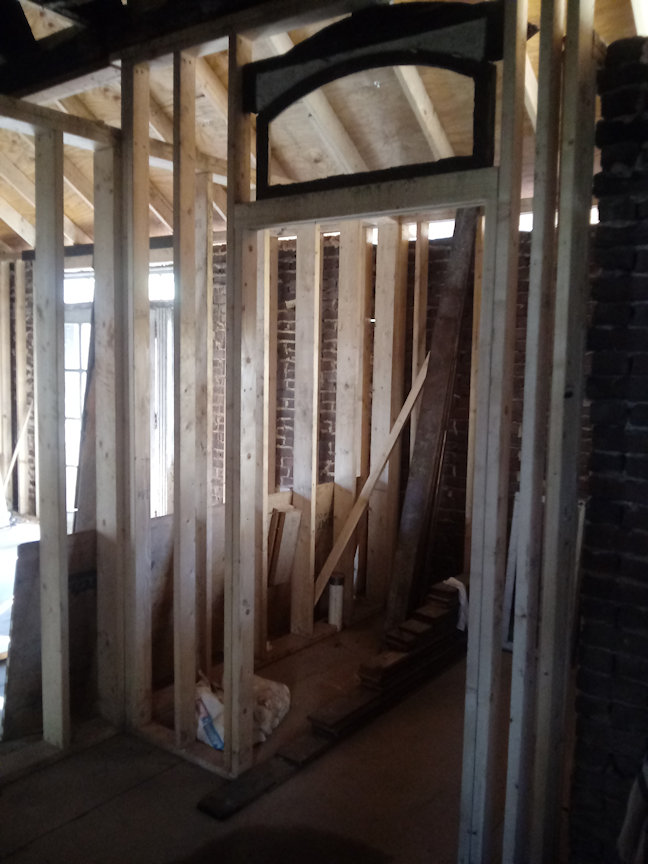 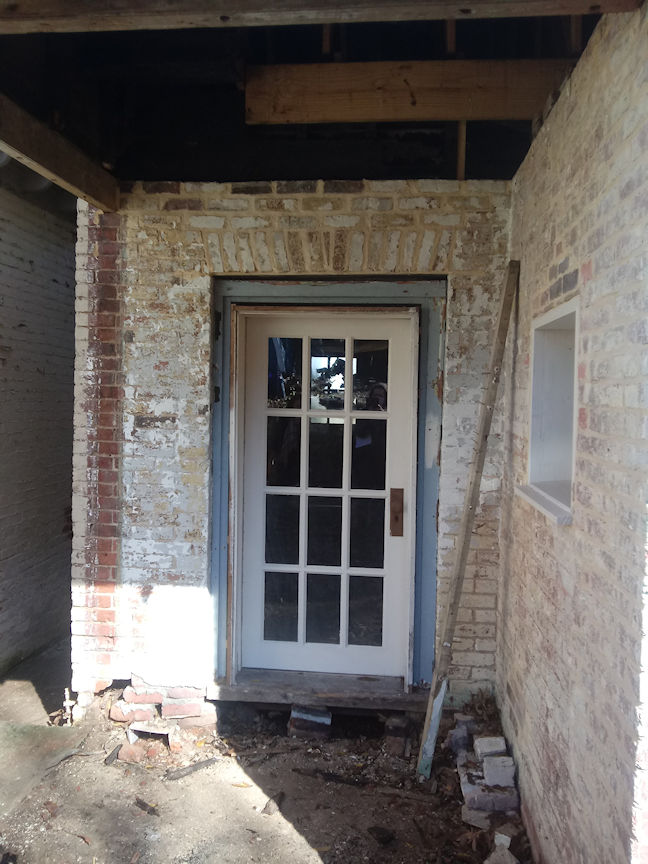 Using salvaged fixtures and architectural elements turns out, it seems, to be in keeping with the construction of the home. Both the Sunshine Cottage and its neighbor, affectionately named Moonlight Manor (122 Chestnut Street) were constructed around 1890 by tobacconist James A. Henderson who acquired the property in around 1884. It’s possible he built the homes as rental properties, or perhaps they were built for dependents, siblings possibly, or other close relations, as the back yards open up to each other, suggesting that common access was intended. In addition, the double garage situated behind Moonlight Manor provides parking for two vehicles, both accessible from a common alleyway (a two car garage would have been extremely decadent at the time the building was constructed, particularly for a house of such modest size). 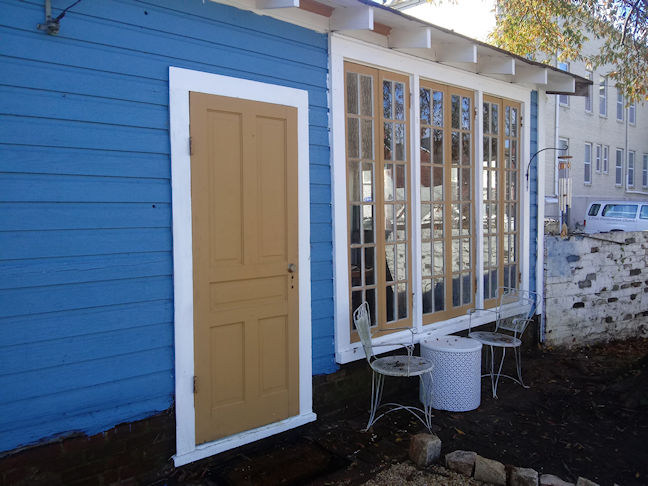 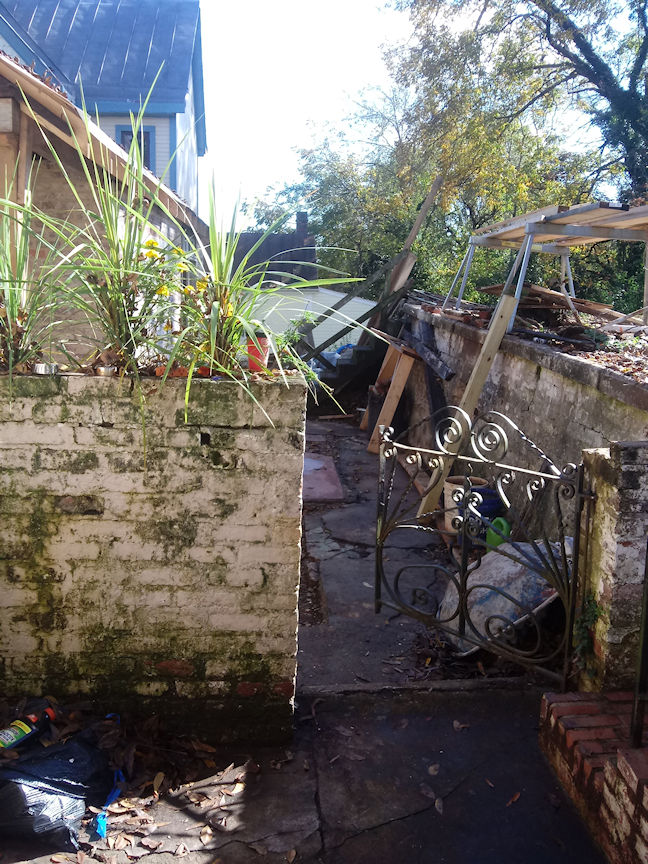 Excavation around the house has revealed that these homes were constructed originally from salvage materials. Was it possible an older home stood on the property prior to the Beers map of 1877, which identifies only a vacant lot between neighboring properties? There is no record of such that has yet been found, but it’s entirely possible that a deed search of neighboring addresses will reveal that such was the case. Evidence of salvage materials being used in the construction of the house include a 1700’s style door hinge, Greek revival window medallions, and, perhaps most remarkable of all, some structural beams in the basement and foundation of the home that feature hand-hewn joints that do not fit adjacent structural members suggesting they were not original to the construction of the present structure. The theme, therefore, of using salvaged materials in the restoration of these homes is in keeping with the patchwork history if their construction and maintenance.

On a table in the front parlor, Michelle has collected many artifacts found in and around the house. The two cups at the top of the picture were found underneath the stairwell. You can see a see a video of the find on Michelle’s Facebook page for Old House Life.

When the owner of the Caswell property was contacted about reusing items in his house – soon to be demolished – for use in Michelle’s restoration project, he was truly grateful to know that these items would live on. Not only had he grown up in the house, but he had been born in an upstairs bedroom, where the sink Michelle wished to use in her newly constructed downstairs bathroom was found. His first bath, given shortly after his birth, was taken in that sink. 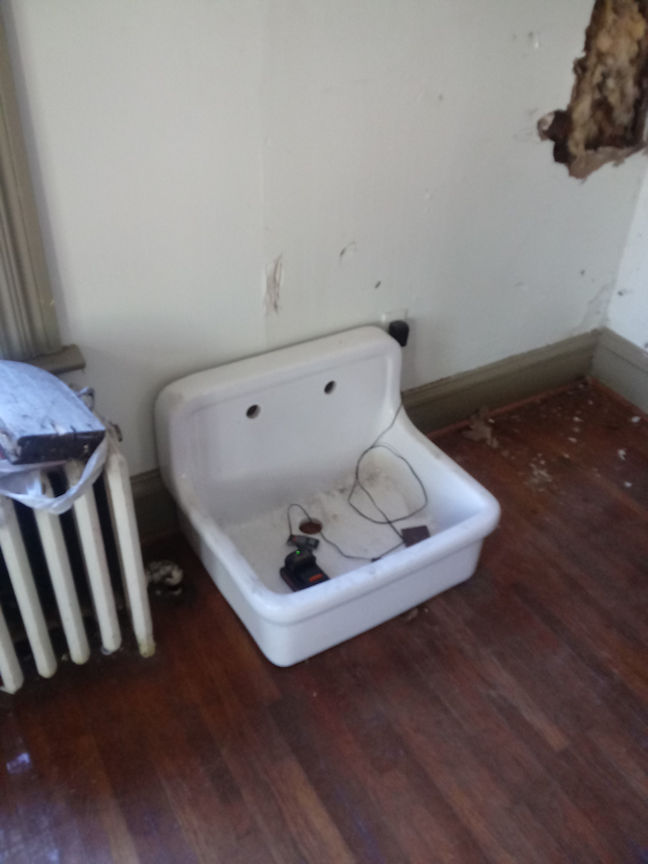 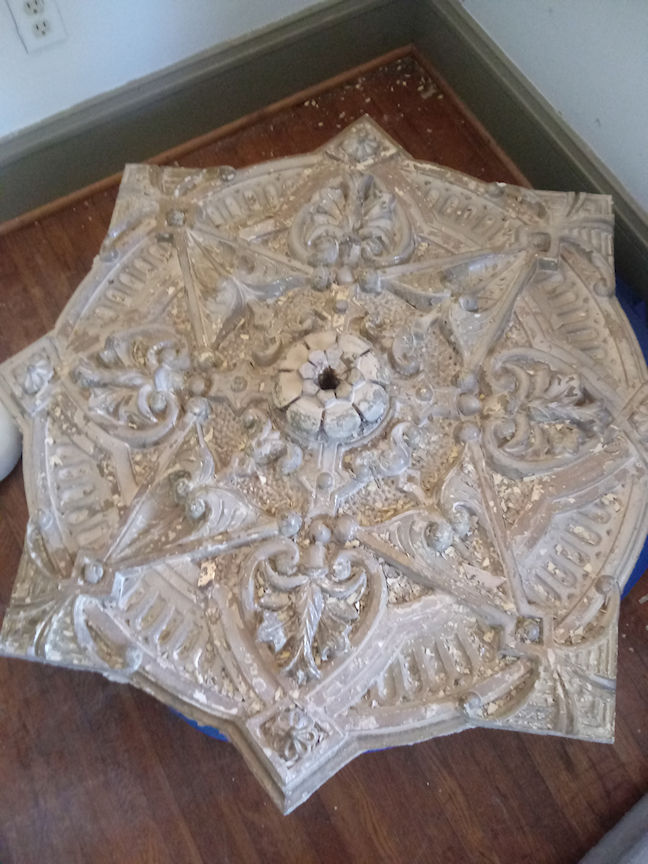 In the course of looking for materials to be used for Michelle’s Chestnut Street projects, items were also salvaged from a property on Pine Street that is soon to be demolished. Some flooring was saved, its intent being for the downstairs bathroom as well. While in the process of removing some mantels from the Pine Street house, photographs and a love letter were found, dating from the 1890’s. Michelle saved them to frame and place in the bathroom as well, a gesture of gratitude for those who have posthumously contributed to the restoration of her own home.

Rescued from the Jefferson Avenue house were some plaster ceiling medallions. A large, round medallion from this house will be installed in the front sitting room of Sunshine Cottage. 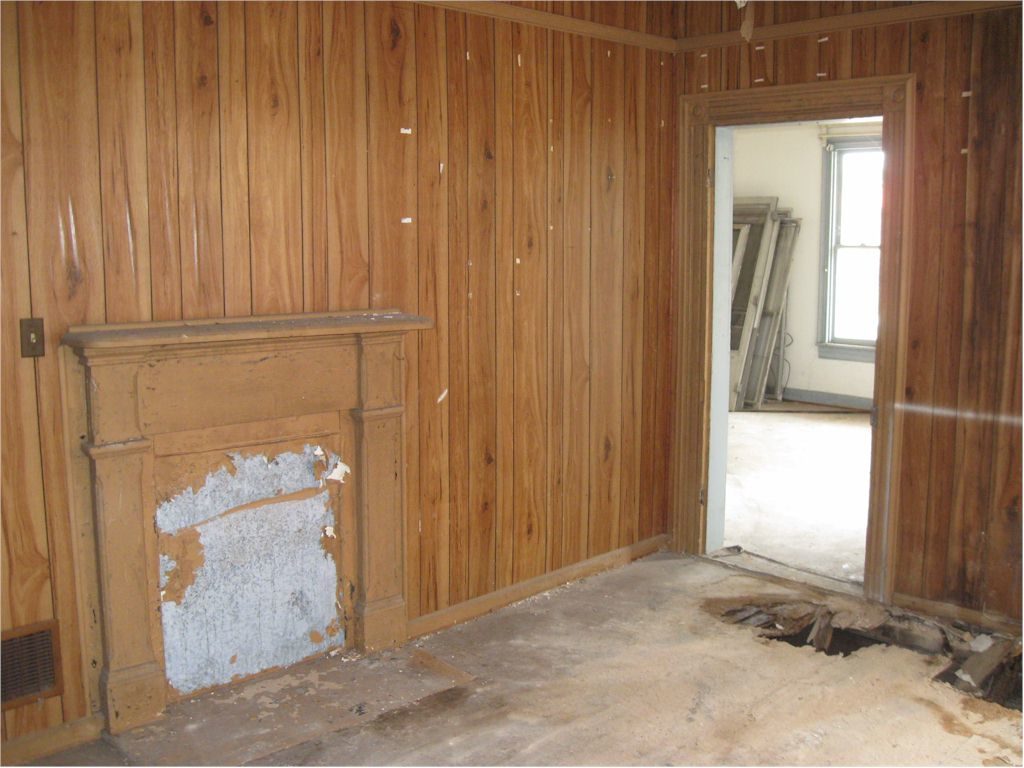 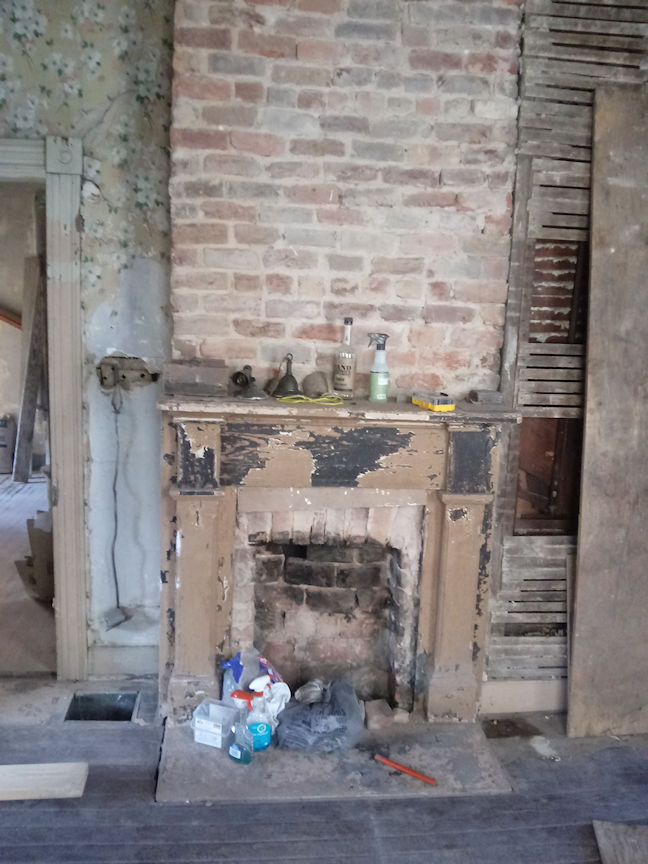 The Sunshine Cottage poses many challenges in its restoration, but Michelle is undaunted. Her industry and creativity, along with her passion for restoration and for these two charming houses in particular, combined with a willing and capable team of assistants, virtually guarantees that these homes will soon be unique and beautiful showplaces. We look forward to documenting the process, so stay tuned.

To follow Michelle’s journey further, including her significant contributions to historic preservation via her work as the proprietor of The Old House Life, be sure to follow here on her website TheOldHouseLife.com and on Instagram @Old_House_Life.