The recent damage from Hurricane Michael recalls an earlier disaster.

The Danville Cyclone of 1911 struck unexpectedly on Sunday afternoon, June 18.  Many Danvillians saw the thunder and lightning storm approaching – including its funnel-shaped cloud darting back and forth.  The business area of the city along with what is now the Old West End were the hardest hit.

The present historic district was then known for its avenues of trees, many of which were destroyed.  Main Street from Jefferson Avenue to Holbrook Avenue was impassable.  The photo above shows the damage on Holbrook Avenue with its trolley tracks invisible under the debris.

Nearly every tree in Green Street Park (shown below before the storm) was toppled.  Across Green Street, the home at 820 lost its summer kitchen and its privy to the wind.  Rather than rebuild these structures, the home later gained indoor plumbing.  (By 1911, new cooking technology made it safe to have an indoor kitchen.) 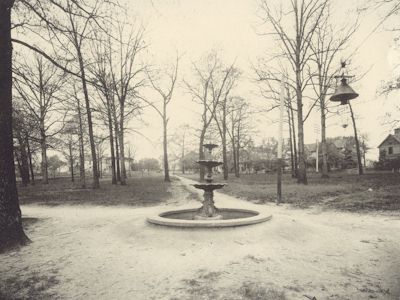 Bland Schoolfield recalled watching the trees falling along Main Street from a window in her father’s new home at 1124 Main Street.  She also saw the anxiety of her father, a mill owner, over damages to his business.  Near the R. A. Schoolfield residence, many windows were broken including several at Mount Vernon Methodist Church.

Some homes were set afire from lightning, but the rains soon extinguished those blazes.  Electric street car lines were knocked down, and all 600 telephones were out of service.

Downtown, a large section of the Burton Hotel’s roof was blown away causing one chimney to crash through the center of the structure into the dining room.  (The Burton Hotel was constructed at “4 Corners” in 1890 on the site of the older Arlington Hotel.  In 1962, the Burton was demolished, and the Downtowner Motor Inn built at the same location.  The Downtowner, in turn, was removed in 2012.  The site is presently empty except for the neon “HOME” sign that first sat atop a mill building in 1947 and installed at this location in 2016.)

On Craghead Street, the Danville Wagon Company’s plant was unroofed and partly wrecked.  A brick tower on Acree’s tobacco warehouse was hurled into the street.  One of the factories of Dibrell Brothers was partially unroofed, as was a portion of the plant of the Imperial Tobacco Company.  The same was true of other nearby buildings.

Elsewhere, nearly 1,000 Danville worshipers listening to religious services under a tent suddenly found themselves out in the storm when their canvas shelter was carried away.

Remarkably, no deaths or serious injuries were reported, and the city recovered quickly.  By the end of following day, streets were nearly clear.  Streetcar service was operating, and electricity was restored south of the river.  Plate glass windows were being replaced and the roofs of some factories and warehouses were temporarily repaired.

As it is today, Danville then was a resilient city, always recovering and striving to improve.

Read more on the 1911 Cyclone from the Richmond Times Dispatch.