Update From the Robert Ross House

Since acquiring the Robert Ross house at 225 Jefferson Avenue in October of 2018, Tina Cornely has been hard at work. The house had sat uninhabited for many years, its previous owner having purchased the property as a hobby fixer-upper project. Part of the magic of the house when Tina acquired it was that it looked and felt much like a home someone had simply walked out of a generation ago. Peeling paint and wallpaper lined most walls, and damaged plaster required repairing. The roof leaked around the chimneys, requiring new flashing and sealing. The windows had been left open and uncovered, allowing for moisture and animals to enter, including a family of birds which had made a nest in the medicine cabinet in one of the upstairs bathrooms. 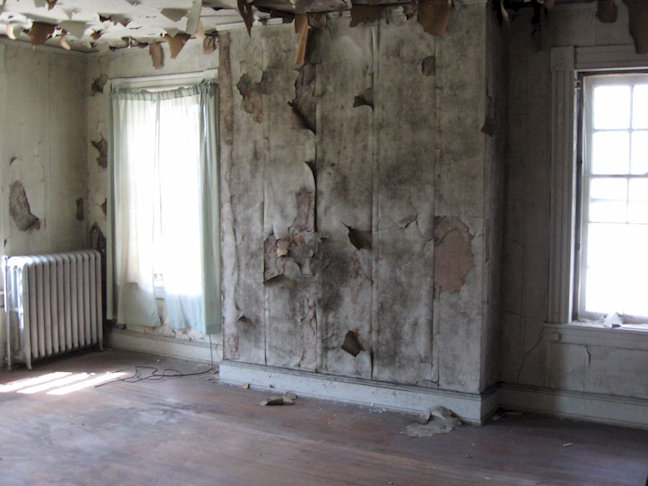 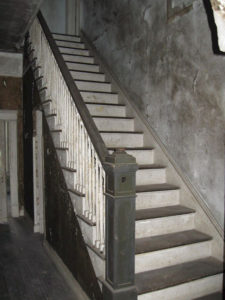 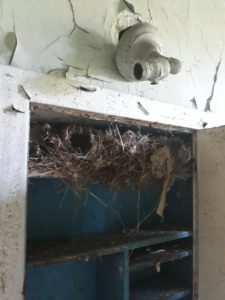 The original Robert Ross house was a single family home, but in the early 1920’s the house was turned into a quadplex for rental purposes. Tina rehabbed the eastern side of the quadplex as her personal residence. The walls were cleaned of mildew, repaired, and painted. The plumbing required substantial work. In particular, the drain pipe for the sink in her bathroom required the plumbers break through the brick wall and wood paneling. Tina was concerned about causing damage to the antique wood paneling, so she developed a workaround that went straight through the floor rather than the wall. Another unusual obstacle she encountered was a water leak that was coming into the back bedroom. She noticed that the only time it leaked was when the wind was blowing the rain from east to west. She discovered a crack in the brickwork above the window, where the wind would push the rain through during a storm. The brickwork was repaired and the problem was solved. 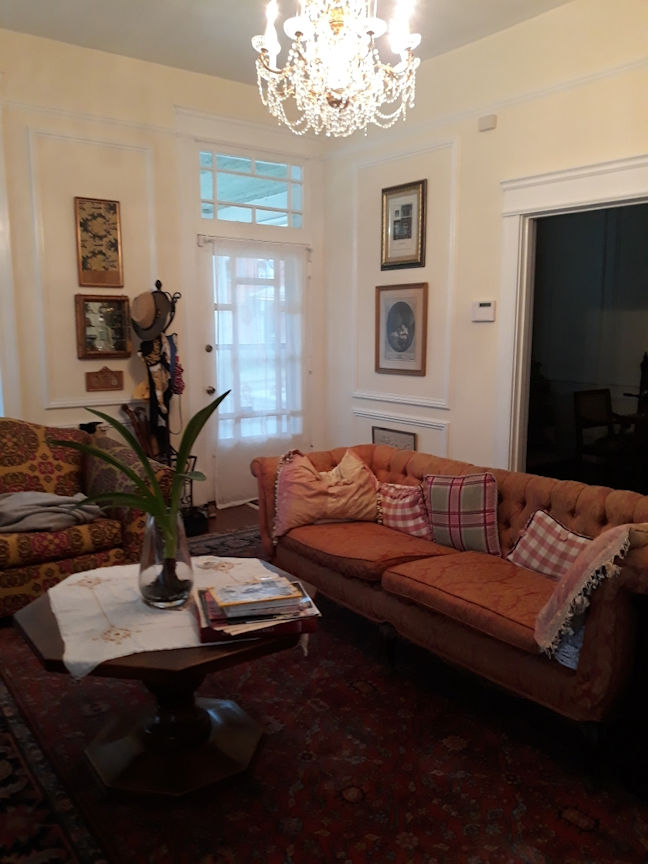 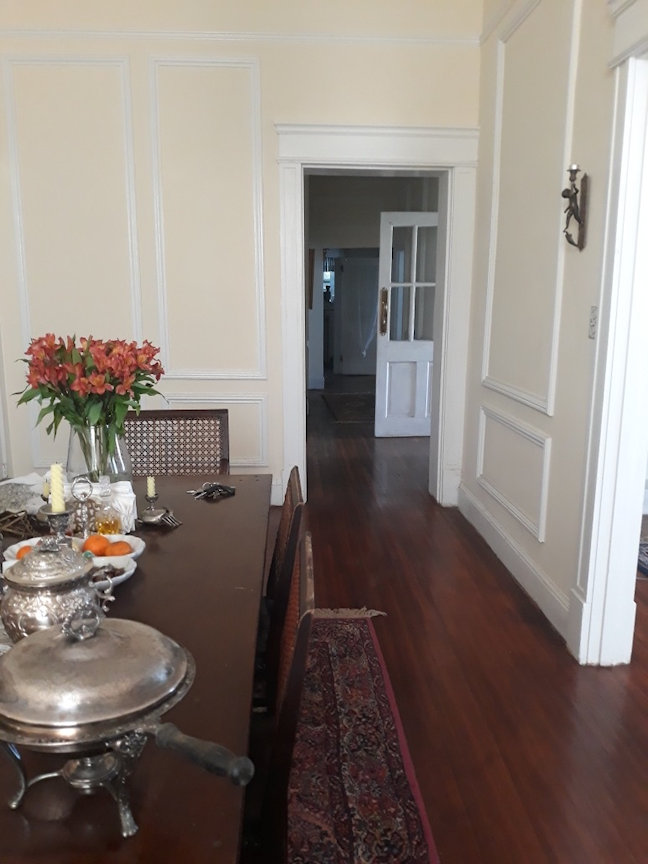 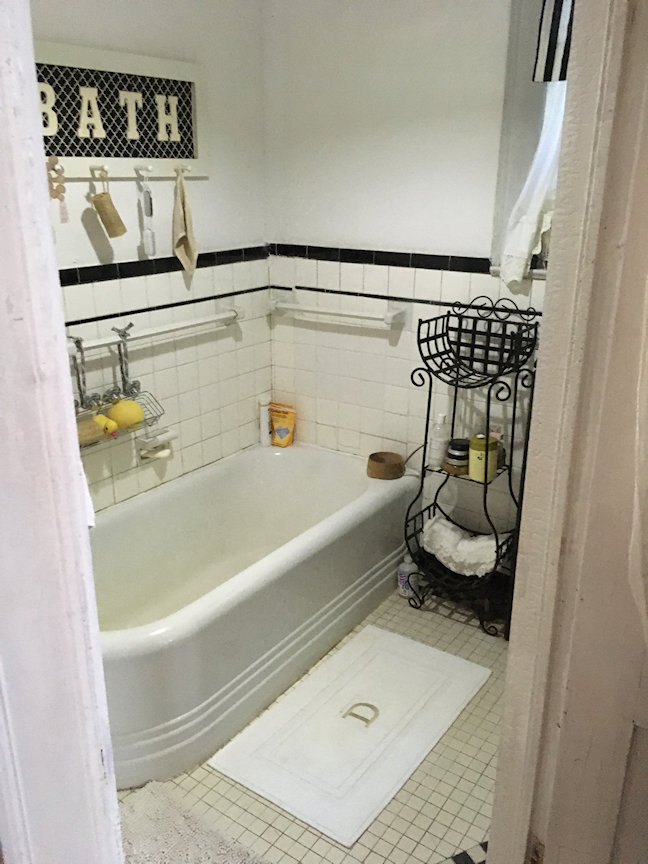 Tina, who has lived and traveled throughout the world and who has a true appreciation for the history of historic homes, has a philosophy of living in these homes the way they were originally intended, without many of modern-day conveniences that some now consider necessary. The house does not have central heat or air, and relies on natural air-flow and the insulating properties of the three-brick thick walls. This philosophy of preserving the past carries over into Tina’s decorating, as well. Where paint on woodwork was cracked with age, she merely cleaned the surface and then protected the age-acquired patina with a protective sealer. 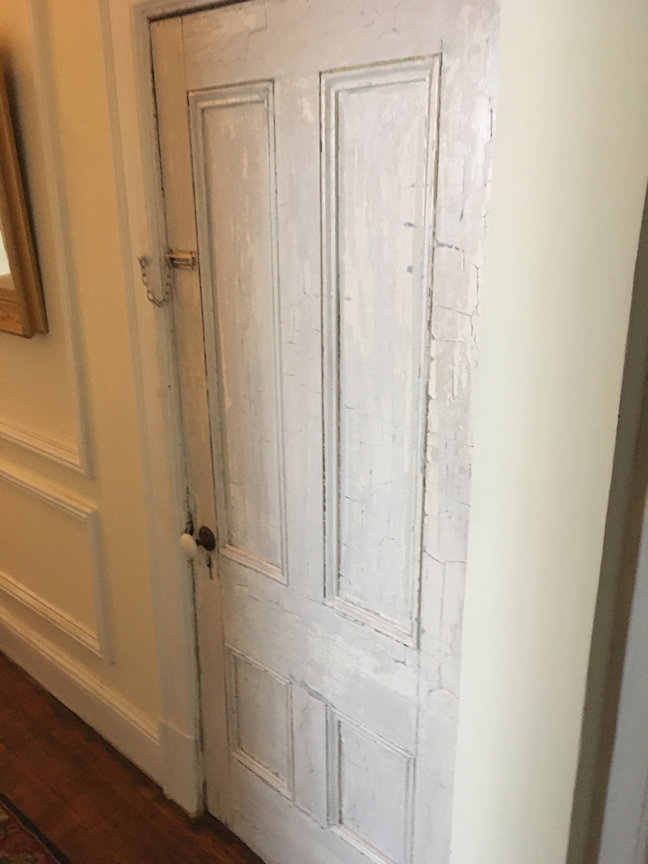 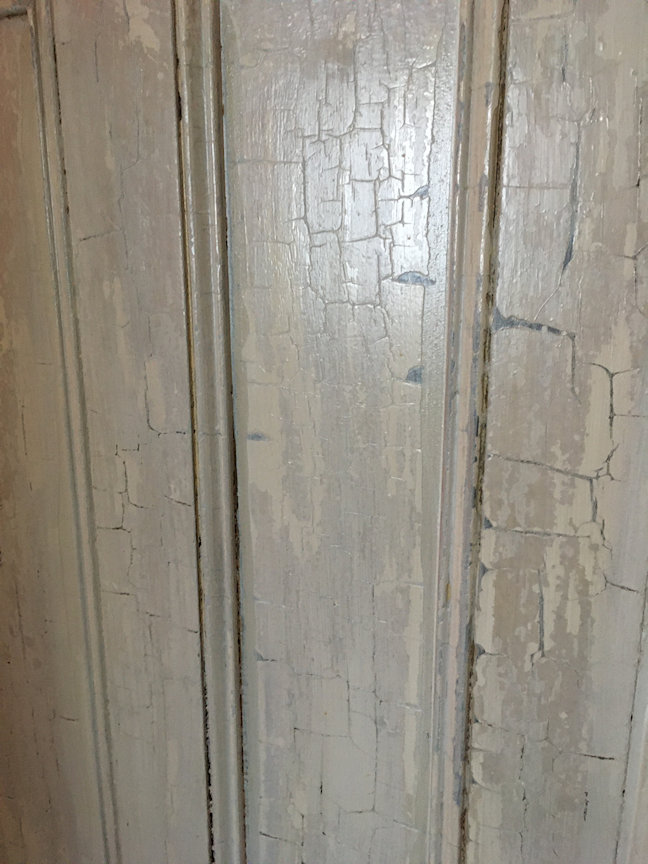 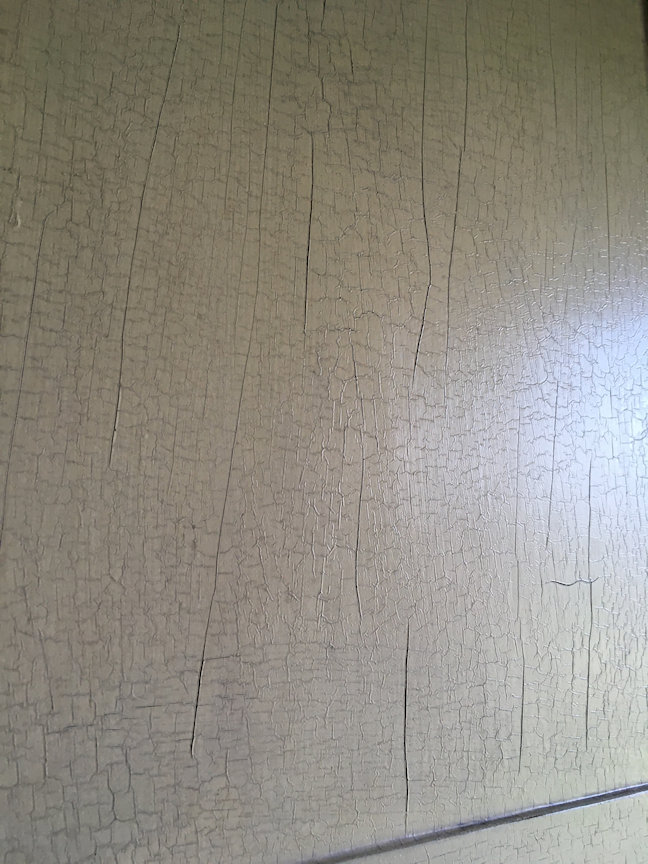 The kitchen, though small by today’s standards, is well-lit and charming. Inspired by French farmhouse kitchens, the patina of the inset cabinets has been preserved. The counter tops, which had been covered in leather during the 1920’s, were stripped and cleaned and tiled with a ceramic tile in a rustic pattern. In this kitchen, everything is close at hand, and no space is wasted. It’s a beautiful, charming, and efficient workspace, even if it lacks some modern-day conveniences. Or perhaps because of it. 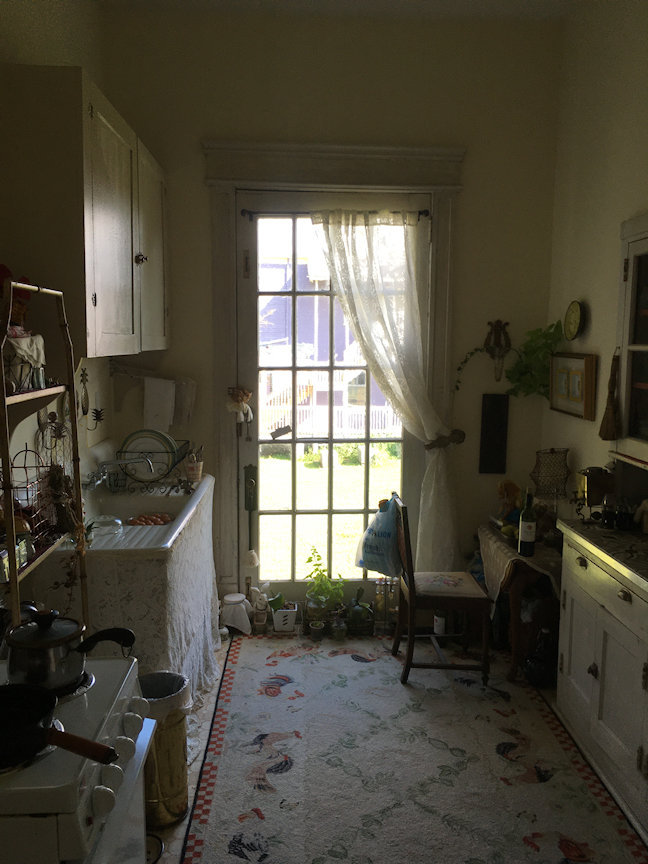 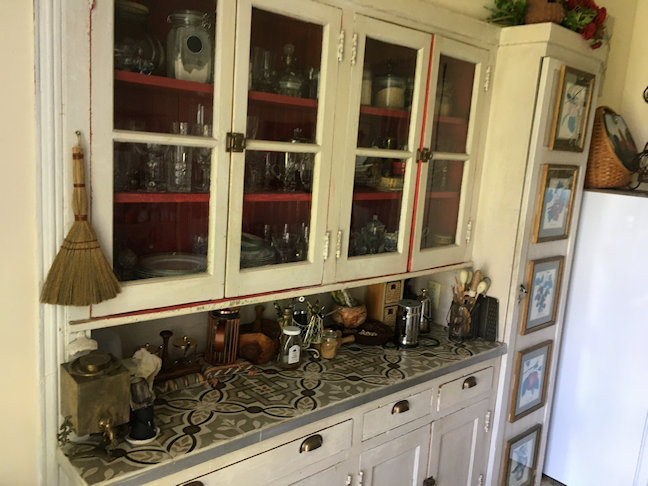 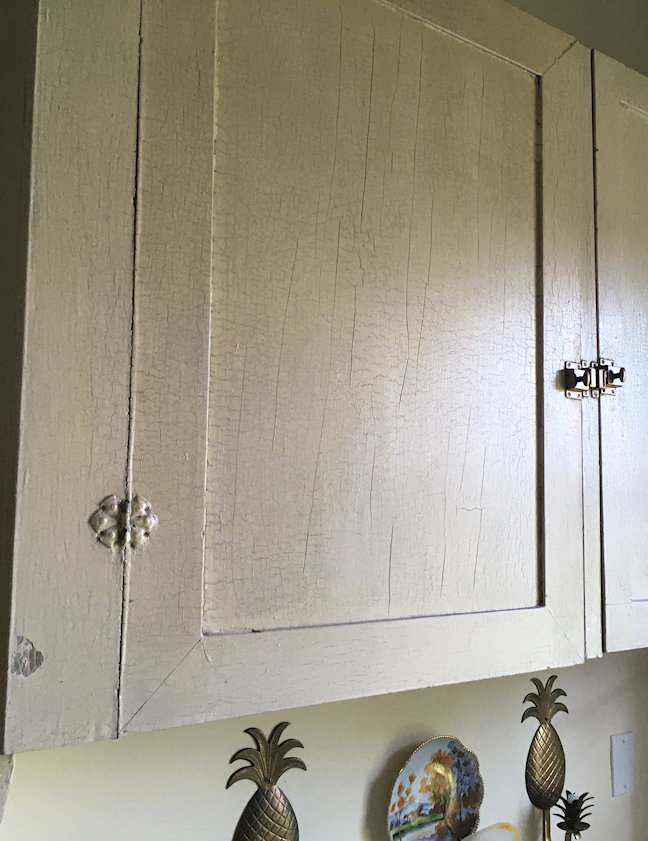 “I wanted to respect how the home was laid out, including the furnishings and architectural elements they used in the 1800’s,” Tina says. “There’s intelligence in how they lived. I feel we can learn a lot from our ancestors.”

Once Tina’s side was rendered habitable, she could focused her energies on the other side of the quadplex. The son of a neighbor expressed interest in living in the second quadplex. His interest gave Tina momentum to finish that section in a short amount of time. This side of the house held a surprise or two. Behind a tarpaulin and dust cloth, Tina found a magnificent Greek Revival fireplace. 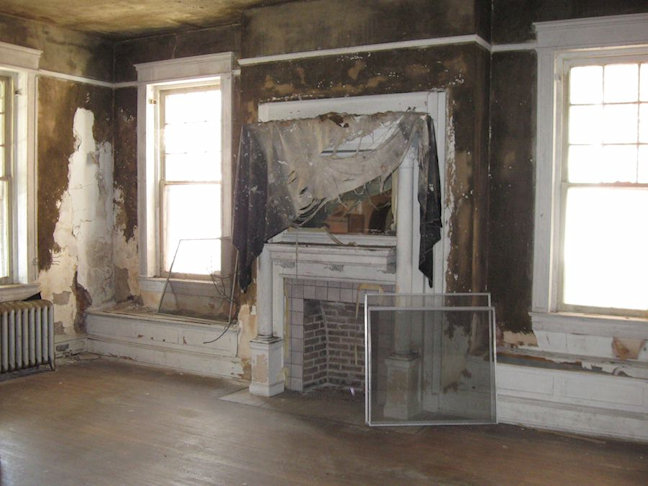 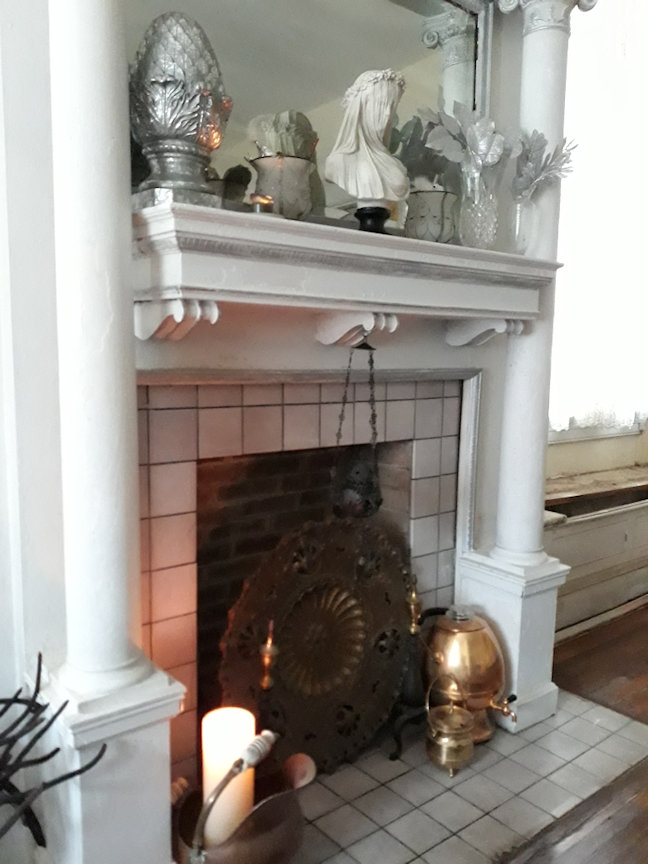 In this formal sitting room, Tina had the window seats rebuilt, as they’d been damaged by water which had entered through the open windows during the home’s vacancy. 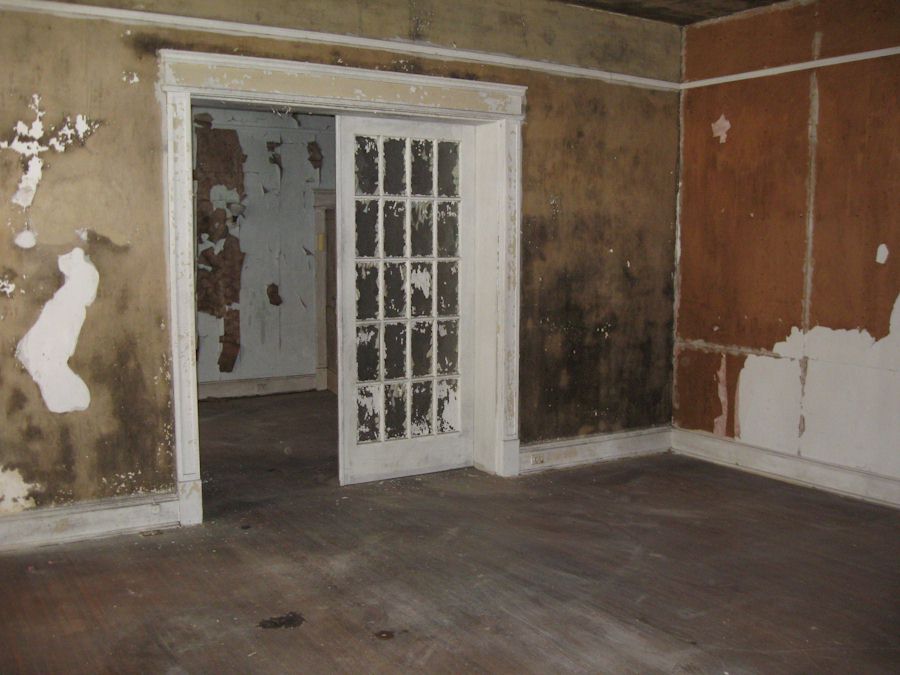 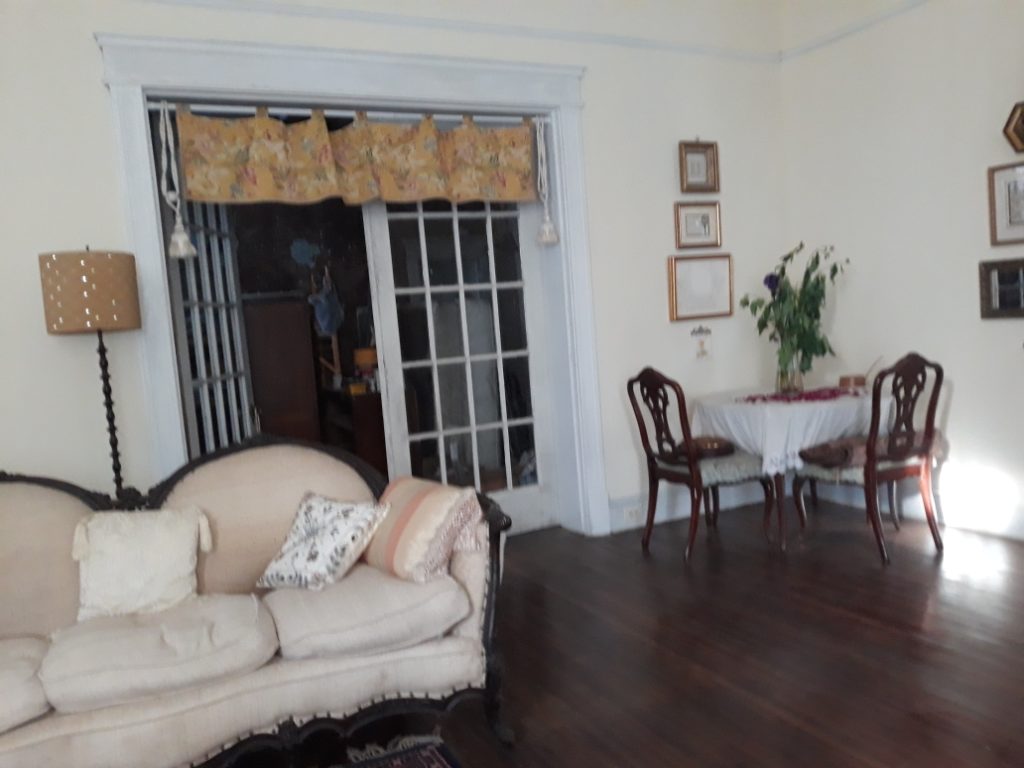 The exterior, too, received some well-needed attention. 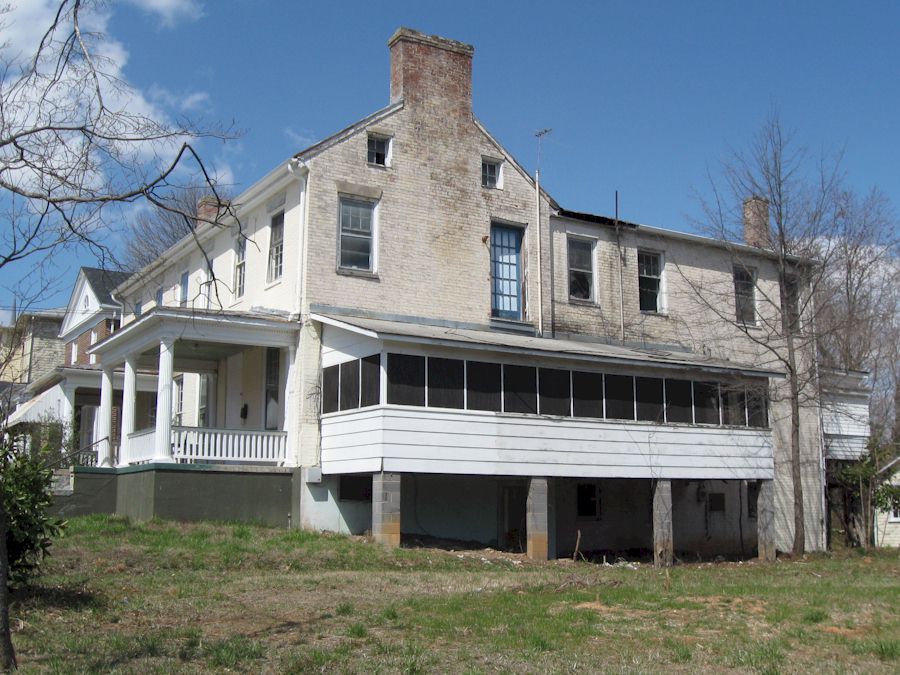 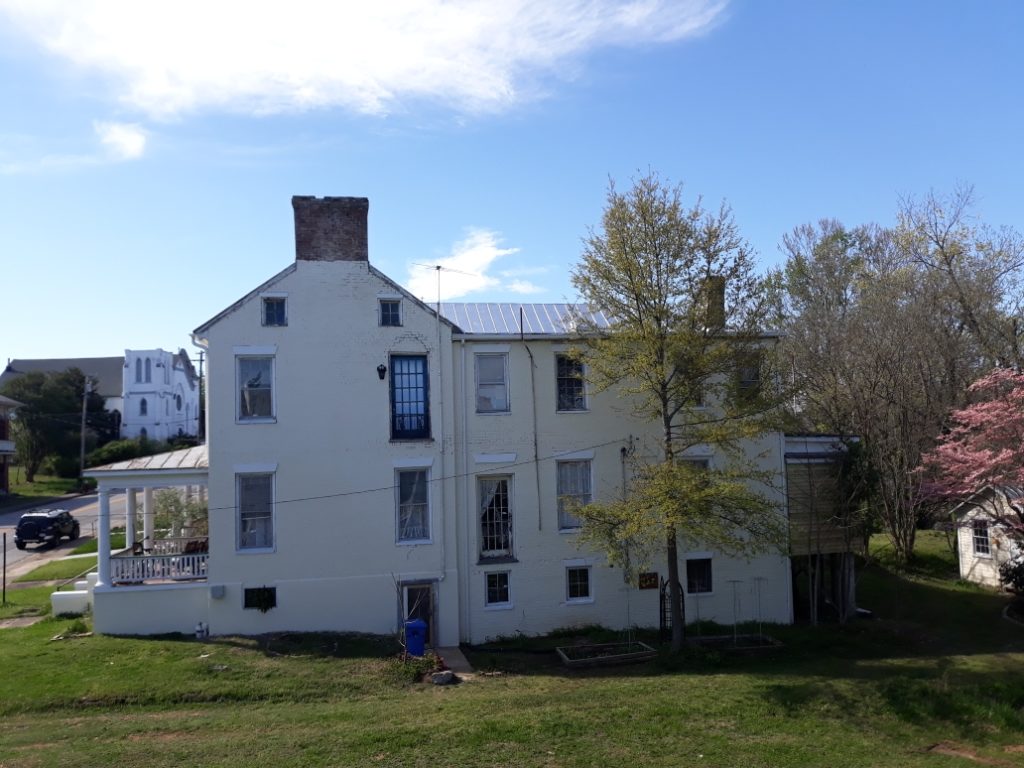 There were quite a few hidden treasures in the house and around it. Inside the house, Tina found three scraps of original wallpaper, which she framed, as well as a piece of an old curtain from one of the bedrooms. Her prized treasure was an old newspaper from February 26, 1933. The paper is an edition of London’s Daily Mail, a publication for women that was used to line an armoire in one of the bedrooms. 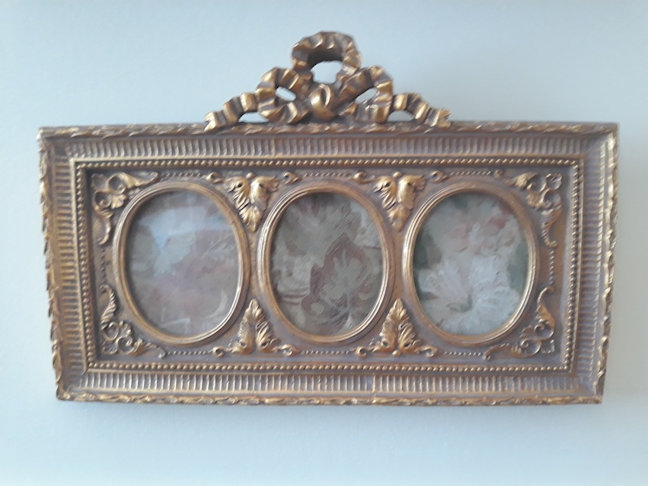 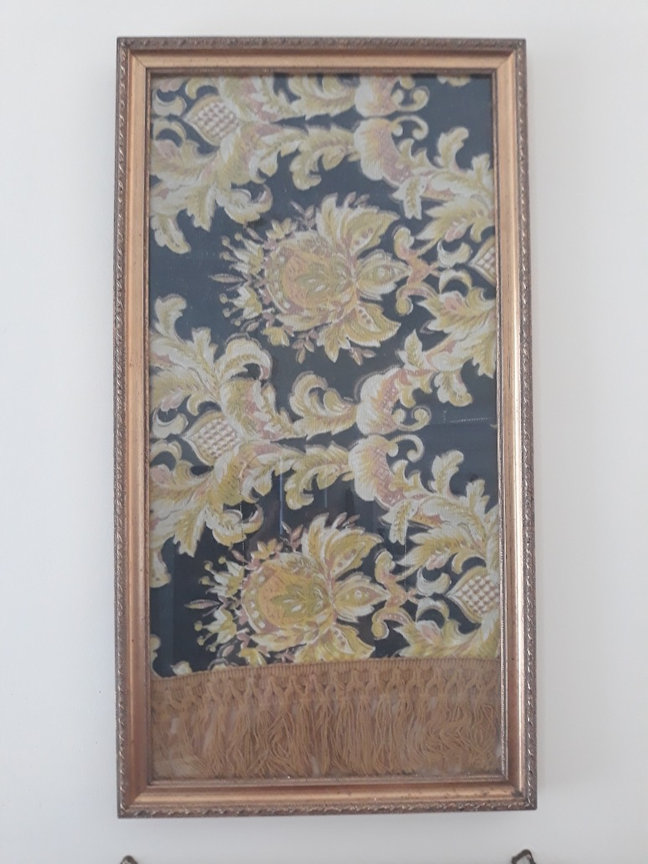 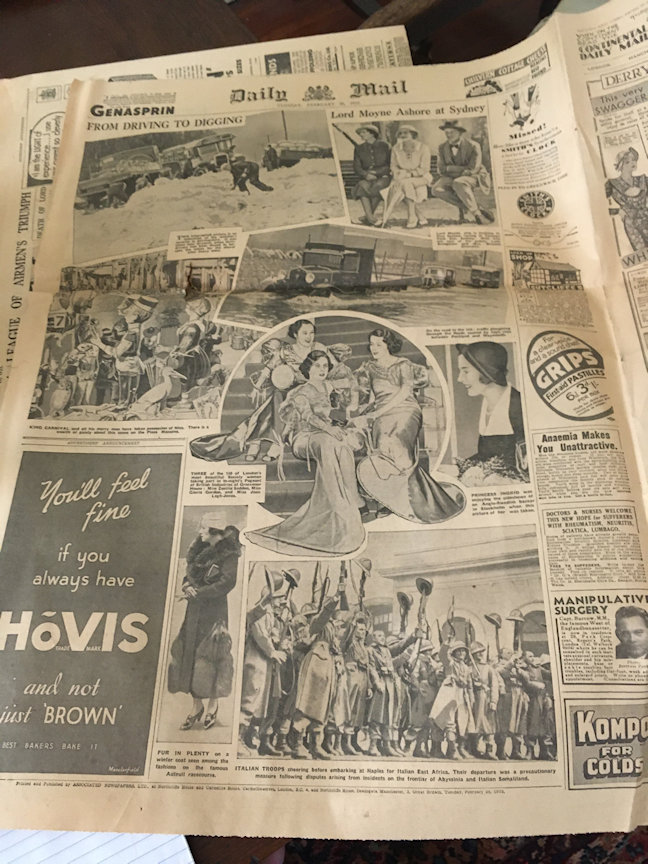 Outside, she found a clay fired marble. These were made here in Danville in the late 1800’s for children to play with during a time when glass was scarce. She found some ornate drawer pulls, as well as a porcelain doll that had been buried in the ground. She keeps these treasures, as well as other special and unique items she’s found around town in a framed cabinet in her formal sitting room, where a sort of homage to the home’s former residents has been created. 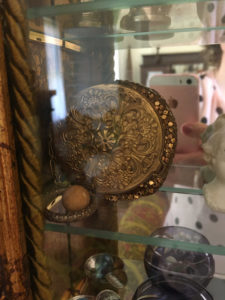 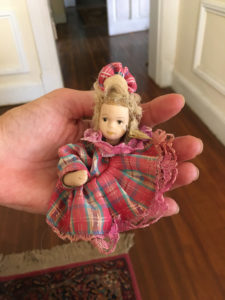 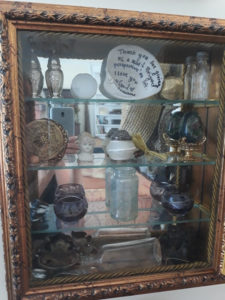 The house itself is a treasure and its restoration remarkable. The only thing more rewarding than seeing these houses being eagerly snapped up by those who are moving here to rescue them, is watching these transformations take place. Stay tuned for more.