The Folk Victorian home at 815 Pine Street actually had its beginnings elsewhere. Believed to have been built around 1900, it was situated on a plot of land identified as being “at the corner of Loyal and Wilson Streets.”  This was back when the Five Forks convergence was located a block north of where it is today. According to local historian Gary Grant, the house is the only one out of four that survives.  The four houses together belonged to a Mr. Hordish, who sold them to K. C. Arey in 1923.  Three of the houses were demolished and the other relocated to make way for a service station. 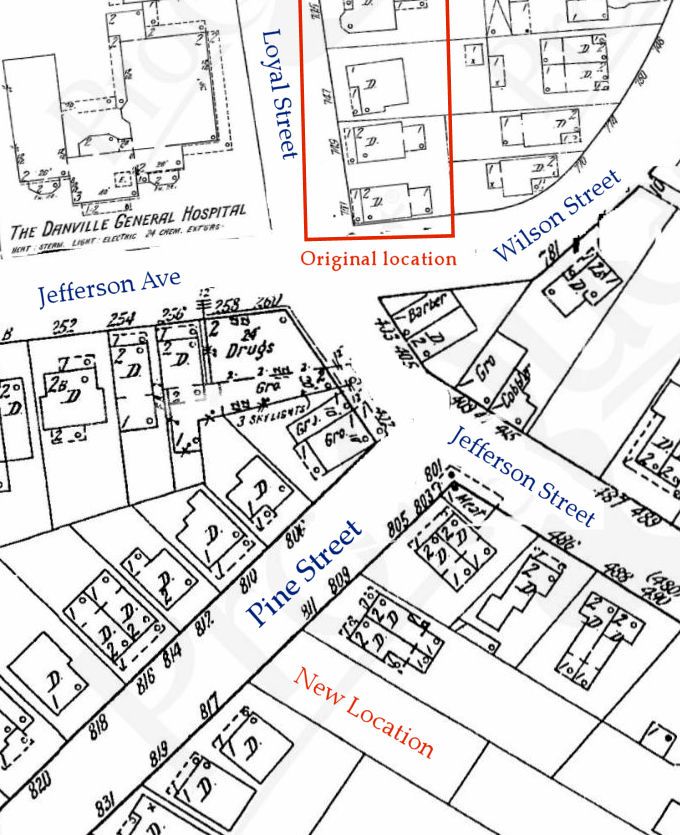 Arey already owned the two houses at the end of Pine Street near Jefferson Street when he purchased the adjacent lot at 815, which had remained empty for many years before he acquired it.  The house that originally stood there, built perhaps as early as 1870, was destroyed about 1898 when it ceases to appear in land books. It is believed that it was P. R. Jones, local druggist, war hero, founder of the Bank of Danville, and former president of the Danville Street Car Company who built the house.  (See more about Pleasant Richard Jones.)

Mr. Arey hired “Al” Patterson to oversee the relocation.  He accomplished the feat, deemed the largest “mass moving project undertaken in this city” by the local newspaper, by raising the house up on stout beams and then moving it over large wooden rollers over a timber track that was laid down to protect the street.  The house was then pulled by a team of horses.  In order to maneuver the house around the corner of Jefferson and Pine streets, and then to turn it around so that it could be backed into the lot prepared for it, the kitchen and back porch had to be removed and relocated independent of the main structure.  Once the house was properly situated on its new lot, a poured concrete foundation was built beneath it.  The project took a little over three weeks.

The house, following its relocation, was used primarily as rental income by Mr. Avery, as well as by the next two owners who followed.  In 1947, Walter Pierce Tudor. former U.S. Congressional candidate and chairman of the city democratic committee, bought it.  But it wasn’t until his wife died in December of 1954 that he moved from his family farm in Dry Fork and took up residence there.  When he died nine years later, it was sold to William Hooker and his wife Shirley, who died in 1970.  Hooker remarried and continued to live in the house until 1981 when the house, once more, became a rental property. 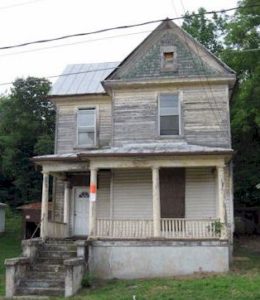 In 2015 the house was once again slated for demolition as shown at right.  OWE Restorations bought the house from the Danville Redevelopment and Housing Authority and has made great efforts to stabilize the house and preserve it for its next owner-inhabitant.  The house – painted, sitting on new sill plates, and with a rebuilt kitchen wing – is presently for sale.  See the listing.