On Tuesday, Crema and Vine served as the venue for an informational gathering. Corrie Bobe from the Office of Economic Development, and Ed Walker (speaking in the photo above), a community real estate developer, spoke about the future use of the Doctors Building at 990 Main Street. The building has been vacant for some time, and while rumors have been afloat about a change of hands and new business going in, we’ve been anxious to hear just what those changes might entail.

If Ed Walker’s name isn’t familiar to you, certainly his work on South Union Street is, where the old Bee newspaper building is being converted into a thirty-five-unit boutique hotel. It’s his intention to do something similar with the Doctors Building (below). 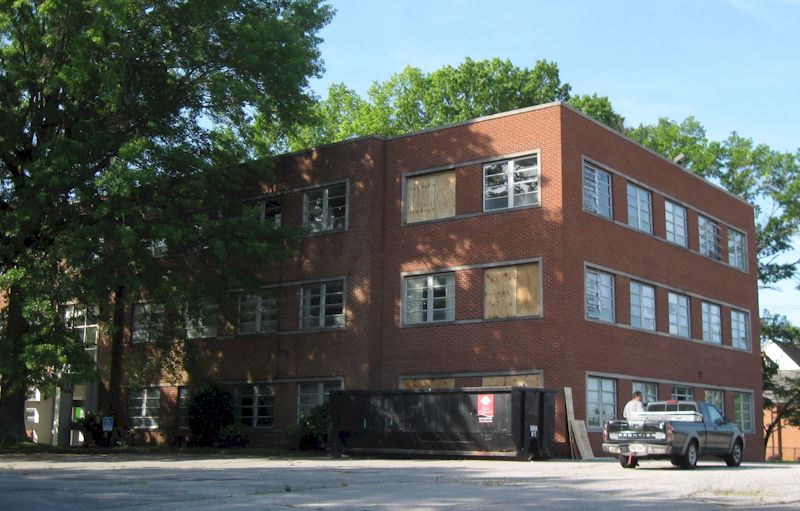 “We need local hospitality,” Walker observed, and his claims are backed by studies like the CBZ Study, commissioned by the city in 2014. One of the findings included the observation that there were not enough amenities in the area around the hospital to support the residential growth we are working so hard to achieve. “Midtown Market is a gem,” Walker said. “It’s really, really special.” He hopes his project will bring business to both Midtown and Crema and Vine, which he also lauds as a success, giving some credit to the Old West End who championed so loudly and visibly for its existence.

Placed at the intersection where the Old West End meets the Holbrook-Ross historic district, he feels that, not only will the placement unite both neighborhoods, but will also unite the disconnected nature of the neighborhoods around Ballou Park, Averett, the hospital, and the downtown areas—a solution to which the CZB Study urged was necessary toward creating a thriving downtown area.

The hotel would be like others Walker has opened with success: approximately thirty-five one- and two-bedroom suites which will offer a higher quality experience than Comfort Inn or Courtyard, but with prices ranging between $99-$120 a night, with extended stay options comparable to a furnished apartment.

Changes to the exterior of the building will be minimal, though plans do include extensive landscaping improvements to the parking area and even some shared space that will allow Midtown Market to have some outdoor entertaining and dining areas.

Walker does not anticipate there being much additional noise produced by the running of a hotel and pointed out the benefit of the additional light and activity it will bring will add a level of security to nearby neighbors.

“Things are happening here!” Walker said with enthusiasm. “It’s the best story of going the furthest the fastest that I know of in Virginia.” Walker doesn’t go out scouting for opportunities to develop, but rather life takes him to those places where, organically, opportunities arise. When considering doing work in any locale, good government and economic development policy is the threshold.

“We have that in Danville,” he said. And he hopes his project will encourage others, by setting an example of how to provide necessary neighborhood amenities that support the businesses nearby, rather than competing with them.