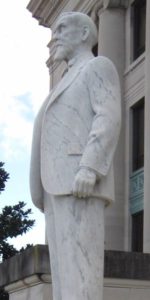 On July 6, 1942, a memorial to Harry Wooding was erected on the steps of the municipal building. It was unveiled by his grandson, Harry Wooding Spencer, and the eulogy, offered to a crowd of 500, was given by John Childs Simpson, president of Stratford College.

Wooding was born on April 27, 1844 in a small house near what was then called Arnett’s Hill, which overlooked Danville. His parents were both pioneers of the area, having arrived in Pittsylvania county long before Danville was a city.

Though his formal education was limited, it was here, amongst his parents and eight siblings, that, as Mr. Simpson described it, “Harry Wooding learned those lessons of discipline and honesty that made him respected in the army and in business. Always he seemed to have respect for others and for the opinions that they might have.” 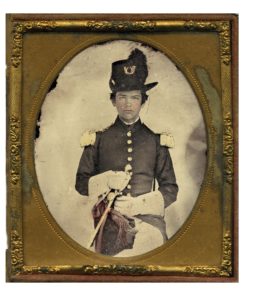 At the age of 17, he watched a fife and drum corps parade through Danville for the purpose of calling men to fight under General Lee. Wooding enlisted in the army on April 23, 1861.  He served his first year in the Danville Grays, 18th Virginia Regiment, and three years in the Fifth Virginia Cavalry under J.E.B. Stuart. He was cited for saving the colors at the battle of Kelly’s Ford. He fought shoulder to shoulder alongside two of his brothers. One was killed during the battle of Bull Run.

Wooding served for the entirety of the war. After the war, he returned to Danville where he set up a mercantile business and also served as Captain of the Danville Grays. Politics soon drew him to serve, however, and his first elected position was that of ward magistrate. Over time, his ambitions grew loftier and he decided to make a bid for the U.S. Congress. Shortly after announcing his candidacy, Mayor Graves died. Wooding decided instead to run for mayor. He was elected and served in that post for 46 years.

Mayor Wooding was described by many, and particularly by Mr. Simpson in his eulogy, as being a link to the present and the past. Wooding described his own character as that possessing “a placid mind, a refusal to let things worry me and a capacity to make friends with the newer generation.”

In 1873, he married Ella Coleman and together they had a son and two daughters. In 1936, at the age of 52, only son, Harry Wooding Jr., died of a heart attack after a year of illness caused by coronary thrombosis. Mayor Wooding never fully recovered. 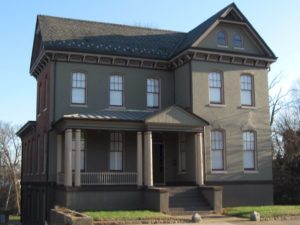 Long a resident of Wilson Street, Mayor Wooding moved to the Old West End in 1903 – first at 841 Main Street (right) and then at 120 Holbrook Avenue.

Early in July of 1938, Mayor Wooding attended a celebration at the Gettysburg battlefield. He was frail but alert upon arriving, but the journey cost him. He returned home weakened, and thereafter spent a good part of every day in bed.

At 1:02 pm, on November 16, 1938, Harry Wooding, age 94, passed away at his Holbrook Avenue home. At the time, he held the record for the longest continuous term as mayor in the United States.

The Bee memorialized his death with these words: “He was serene to the last, going down into the shadow of death with that same calmness and cheerfulness that characterized his outlook on a useful and well-spent life. Mayor Wooding had repeatedly said to his intimates that he was not afraid to die.”