The Lee House at 152 Sutherlin was built in 1897 for Mr. John Lee, a principle in the lumber firm of Brown, Bass and Lee.  It is said he held aside the best lumber from his company in order to build the house.

Mr. Lee was born in Salisbury, Maryland, on September 15, 1832.  In 1869 he married Florence Jeffries of Culpeper, Virginia, and the couple moved to Danville in 1875.  Mr. Lee first founded Lee and Company, which was located at the corner of Lynn and Colquohoun Streets.

When Mr. Lee died in April of 1911, he was remembered as “one of Danville’s oldest and most esteemed citizens.”  After his death, his wife and at least two of their six children, John Jr. and Myrtle, remained.  By 1927, Miss Myrtle Lee was living in an upstairs apartment and renting out the main portion of the house.  She remained there into the 1950s, before moving to Culpeper, where she died in 1956.

While most of the houses on Main Street were built by tobacconists, Sutherlin Avenue was often home to men in the lumber business.  Mr. Lee, having purchased nine lots running toward Green street, began construction of adjacent homes in 1898.

Some sources trace Bass, Brown and Lee’s beginnings to the Danville Planing Mill believed to have been founded in 1854.  It was also associated at one time with the names Crawley and Jefferson.  They set up shop at, or near, the mill’s 600 Lynn Street location.  Mr. Lee absorbed that company, and by 1886, Bass, Brown and Lee had been formed. 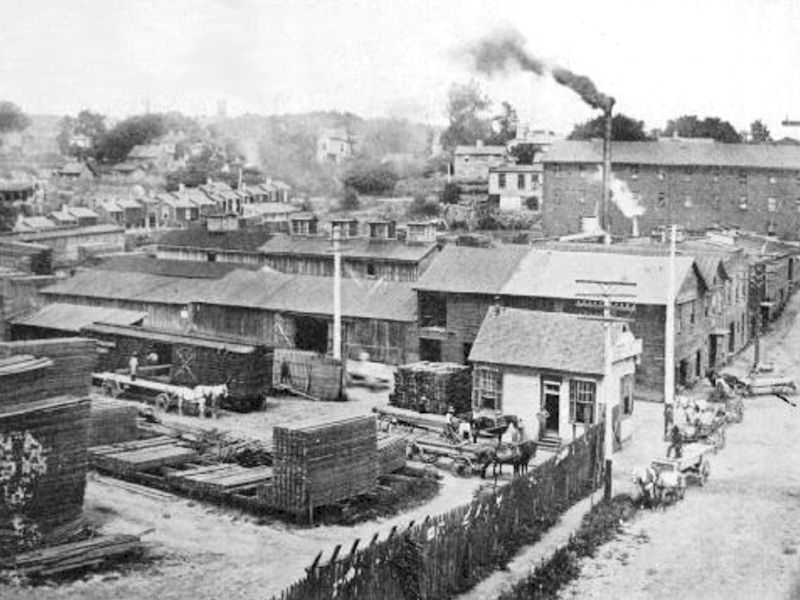 It was in this year that Powhattan Conway, newly arrived in Danville, began working for the firm.  Conway remained there for four years before joining a partnership with W. L. Walker to form Walker and Conway.

In 1896, Walker and Conway bought Bass, Brown and Lee, and, together with Anderson and Company, eventually formed Danville Lumber and Manufacturing Company.  That company incorporated in 1902, as witnessed by notices in the newspaper.

Conway and W. D. Overby presided over Danville Lumber and Manufacturing until their retirement in 1945.  They died within weeks of each other in July of 1946, not a year later.

C. L. Minter and Hubert F. Fitchett purchased the company, which remained in business until 2008.  By that time, its buildings had begun to collapse, and there was a small fire.  Its 150-year-old site was demolished and portions of it reused to build the new fire station which was officially opened on September 11, 2014.