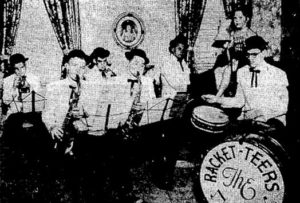 “Johnny,” as he liked to be called, loved music. His interest, even from an early age, inspired him to learn to play just about every instrument imaginable. He traveled throughout the area playing in bands and orchestras for social events. One of his earliest ensembles, with Johnny at the piano, was called The Racketeers.  He and his “all-star serenaders,” as the paper called them, were regularly hired for dances at the Masonic Temple. In 1945 he had the opportunity of playing for casualties of the war who were convalescing at Fort Picket.

Johnny was also a passionate naturalist. He spent a great deal of time in nature, collecting rocks and shells, as well as butterflies and birds. These he preserved and had mounted. Hobbyists and professionals alike respected his archeological knowledge. In 1963 Howard MacCord, president of the Virginia Archeological Society, came to Danville to see “what remnants of prehistoric inhabitants and early settlers have been left in the area.” His interest was well founded. Just six years earlier, while leveling the ground for the new raceway, bulldozers unearthed a burial mound. Johnny was called to the scene where he observed skulls, bones, pottery, and other artifacts, which he identified as belonging to the Saponi Indians, a tribe of the eastern Sioux.

Johnny’s expanding collection travelled with him as he moved to different residences in the neighborhood, including the Judkins House at 161 Holbrook Avenue, where he lived in 1956. It was his wish, however, to make his collection available to the public. For a time, a formal exhibit was located at 902 Paxton Avenue. In 1950 another location was established in the basement of 944 Main Street.

In April of 1973 a former student and protégé, William Hathaway, opened a Museum of Natural Science and History at the Chatham Education and Cultural Center. Johnny gladly donated his collections of shells and Indian artifacts. Later, he and Hathaway approached DCC with the intention of finding a more permanent place for the collections. The college agreed to accept them, but it took a few years of planning before a space could be dedicated for their display. In 1975, a year after Johnny’s death, the college opened a classroom for the exhibit.

In 1974 Johnny was living at 163 Sutherlin Avenue. On the 17th of March he had made plans to go butterfly hunting. When friends arrived at his home that morning, he was discovered to have died peacefully in his sleep.

The Bee remembered Johnny as “one of the more effective educators in the history of Danville, however informal and unorthodox his methods. A modest appraisal would place at thousands those Danvillians—past and present—who freely and happily acknowledge that their own lives were enriched by the contact they had in their youth with a quiet, smiling, squat man full of enthusiasm for people and all forms of life.”