The gift-giving season is upon us, and for those of you who have not finished your shopping, we at the Gazette would like to offer a few simple suggestions chosen from amongst those which you may have seen advertised in the local papers—were you alive and old enough to read them when they happened to be published. If you’re looking for the unique gift idea for that special someone, perhaps a walk down memory lane will inspire you. 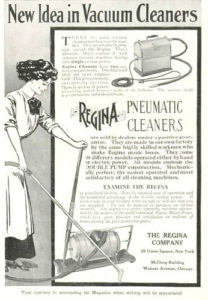 As every husband knows, a wife is never happier than when she is blessed with that thoughtful gift that says, “I love you,” but which also subtly implies “perhaps the house could be just a little cleaner, dear.” While the vacuum cleaner was invented as early as 1898, original models were gas powered and so large that they must be pulled by horse. The machine itself didn’t enter the home, but the tubes were inserted through the windows, where they simply blew the dust “away” and hopefully out of the house (but probably not, right?) A few years later, the vacuum was reversed and suction was created. Still the machine was as cumbersome as its predecessor. In 1905, Walter Griffiths invented the first portable machine, followed by James Kirby a year later with his “Domestic Cyclone”, which used water to filter the dirt from the air. In 1907, James Murray Spangler developed the first portable vacuum with an internal motor but he had no money to produce it and so he subsequently sold the patent to William Henry Hoover. As with most electric powered devices, the vacuum cleaner was held in high suspicion until the first world war, which put a pinch on the availability of domestic help. They were still considered a luxury, however, up until the second world war, at which point they became a near necessity.

If your housekeeping problems extend beyond the simple issues of dirt and dust and perhaps delve into the unfortunate realms of pest invasion, the Mousetrap Pistol might come in handy.

This doozy of a device, brought to you by James A. Williams in 1882, never quite found the popularity its inventor had dreamt of. Perhaps it’s because a mouse quietly bludgeoned by a spring trap is somewhat easier to clean up than one pulverized by a .50 caliber revolver. Just a guess.

Of course there’s no housekeeping task more important than that of maintaining the astutely applied decorations to one’s facial furniture that is the required daily routine of some men and almost all women. 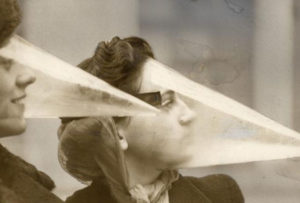 For the lady in your life, why not consider a snow protector for those bitter Virginia days. The cost of a stray snow flake (or a particularly brazen raindrop) dislodging one’s false eyelashes cannot be underestimated. Here is surefire insurance for such a catastrophe.

*Disclaimer: Be advised that, though these cones are constructed of translucent plastic…they do fog up dreadfully.

For those stylish gentlemen who have succumbed to the social pressures of fashion and have gone in for facial hair, perhaps it might be prudent to protect those carefully grown growths with the oh-so-useful mustache guard. Styles vary. Get yours now before they’re gone! 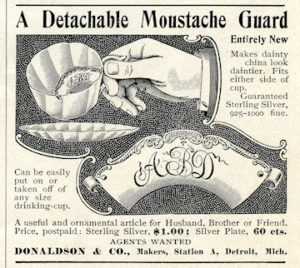 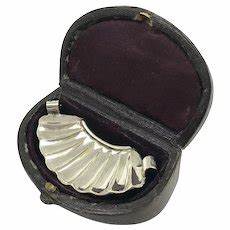 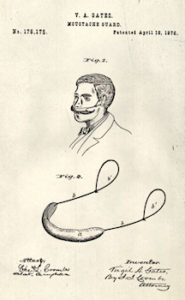 While we are on the subject of facial accessories, perhaps there is no accessory more useful for those dedicated to celebrating the holidays in style than the hangover mask. On your way out of the house for that Christmas or New Year’s Eve party, just pop this baby in the freezer. When you stumble home and fall into bed, rest well knowing your hangover remedy is ready and waiting for you as soon as you wake up! 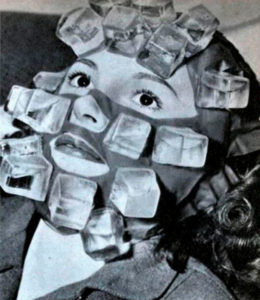 This lovely item is brought to you by Max Factor, the cosmetics giant. Or you could just drink less, but…who are we kidding?

Since the invention of the automobile, safety has been of prepossessing concern. Engineers the world over have been frantically trying to franchise the next greatest safety feature. And since there is no one for whom the car is more dangerous than the pedestrian—and aren’t there so many of them on these busy last-minute shopping days?—the geniuses behind the locomotive cattle guard bring you the pedestrian scoop! 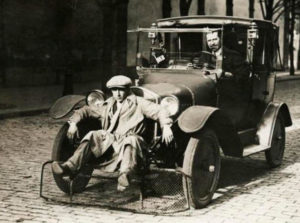 This handy shovel attachment makes every driver instantly more considerate by carefully scooping up the mindless (or too slow) pedestrian rather than maiming or outright killing them. Won’t your insurance company love that! The scoop fits most makes and models of car (Fiats and Ford Pintos excluded) and doubles as a goose guard, for when migratory flocks are of a mind to block the way (we’re all familiar with that headache).

Speaking of automobiles, how about considering wireless navigation, circa 1922?

The following is an extract from the Danville Bee. January 1922

You needn’t ask the cop.

Wireless will guide you.

That is, if the latest invention to direct the motorist is adopted along the highways of the United States.

Travel along strange country roads in the future would be like wending your way through well known streets of your own city. No visible road signs, not a marker in sight!

The invention, at the automobile owner’s end, consists of a receiving box on the dash connected by relay, amplifier, and wire with a detecting coil above the radiator cap. A series of dots and dashes in Morse code is perforated on the face of the receiving box and underneath are two arrows pointing opposite ways.

Use of this end, however, cannot be achieved without co-operation of the federal and state highway commissions. For transmission of the road signals would have to be under supervision.

Wires must be strung along each highway and connected by small electric generators strong enough to set up a magnetic field along the wires. Over the wires are sent signals in Morse code—a different signal for each link of road—which would be picked up by the receiving instrument on the automobile as it goes through the magnetic field.

The box on the dash visibly records those signals. All the motorist need do to learn on what road he is, is to consult his code book for the signal corresponding to the one recorded.

The driver keeps his receiver open and as he goes along his way, the changing of signals on the receiving box will tell him the various roads he is taking. The arrows will flash to tell him the direction the route turns when he comes to a crossing or fork, and a bell will sound if he is divided from the main road.

In case of detours, a special transmitter is set up directing the motorist along the temporary road. Before the point is reached, an arrow flashes indicating a turn in the road.

The system is based on an invention by Earl Hanson, an American, which was used during the war to guide ships silently through the darkness into port. The detecting instruments on the ship cutting into a magnetic field set up a cable at the bottom of the bay would guide the pilot safely into harbor. 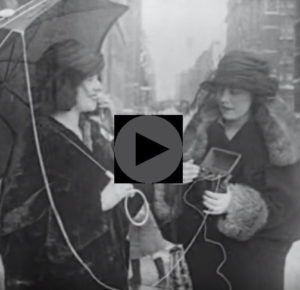 The 1920’s was quite a year for wireless technology, as it happens. Below is an advertisement for a mobile phone. Don’t forget your handy wooden carrying box and antenna umbrella. Just locate the nearest fire hydrant and you’re all set! 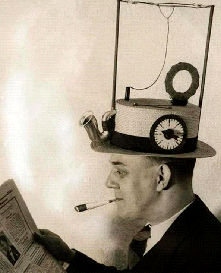 These early phones were not quite iTunes equipped, but that didn’t mean you couldn’t take your music with you. Why not consider this stylish approach to wearable technology?

Whatever gifts you decide to give, we at the Gazette are grateful for you, our readers and neighbors. Happy Whateveryouscelebrate! And best wishes for the New Year.