In the spirit of Halloween, we thought it might be fun to visit the folklore surrounding some of the old West End’s “haunted” places.  A few houses in particular are known to have regular visitors from beyond the grave.

The Lanier House at 770 Main is said to be the oldest residence in the city.  It’s little wonder then that it is also known to be haunted.  The house was built in 1830 for the city’s first mayor, Captain James Lanier. Though the house is now home to the law offices of Garrett & Garrett, it was also home, in the 1940s through the 1970s, to the city’s first pediatrician, Dr. Samuel Newman.  Those who have witnessed ghostly activity claim to have seen apparitions, to have heard mysterious voices and footsteps, and to catch the occasional whiff of phantom cigar smoke. 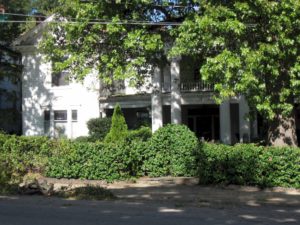 904 Main Street, properly known as the Bell-Pace-Boatright House, is another of Danville’s oldest houses, and stood as the events that led to the end of the Civil War took place. It is presumed that, during that time, it housed Civil War soldiers. Perhaps because of its age, perhaps because of its history the house has long been known to be spiritually active. Johnathan and Ginger Holbrook and their children have had several sightings, including a Civil War soldier who, on multiple occasions, has been seen entering the basement from the outside. Other sightings include a servant who passes through a wall where there is no door, although there used to be.  That door, long since walled up, once led into a butler’s pantry off the old kitchen.  Ginger has also seen a little girl in period clothes and heard the voice of a “proper sounding woman” in the living room.  Other stories include the sighting of Mr. Boatright, the house’s original owner, as he sits in a chair or rocks in a swing on the second story porch. He will cease his rocking when asked.  Some have said they see the face of a little girl peering out of the attic dormer.  The family has never had any reason to be frightened of their ghostly visitors and feels they are quite friendly. 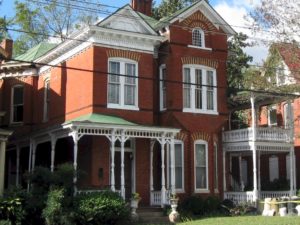 C. B. Maddox tells the story of a visitation that occurred at his house at 230 Jefferson Avenue. It was Thanksgiving, and a friend was staying over. He and his girlfriend were sleeping in one of the upstairs bedrooms. The friend awoke in the night to find a woman sitting in a rocking chair, rocking violently, and looking at him in a warning, disapproving manner. When, a few years later, that same friend returned to another Thanksgiving holiday, this time with a different girlfriend, the ghostly apparition reappeared in the rocking chair.  Only this time her demeanor was placid, even approving.  The friend, perhaps taking it as a good omen, went on to marry the woman.

C. B. believes the woman in the rocker was Mrs. Lillie Crews, who lived in the house from about 1927 until sometime in the 1980s. For whatever reason, the gentleman’s choice of bride was of great importance.