Harry Campbell Ficklen (1867-1937) was one of the Danville’s most exceptional and unusual men.

His father and mother, John Fielding Ficklen and Sarah Anne Slaughter Ficklen, left him two large tracts of land on the Salisbury Road – now West Main Street. Harry was raised in a house called Oak Lawn on the tract which become known as Ficklen’s Field. The house was across from the intersection of West Main and Mount Vernon Avenue. It was at the western edge of what is now the Old West End historic district. The tract of land included today’s Lady Astor Street and Westmoreland Court as well as parts of Randolph Street. The other tract, near Schoolfield and known as Ficklen’s Pines, today includes the Ballou Park Shopping Center.

As a boy, Harry played with children from the Langhorne family including daughter Nancy. Widely known as a public speaker, it was Harry Ficklen who so eloquently introduced Nancy on her return to Danville in 1922 as Lady Astor. In addition to praising her success, he was able to remark on her skill at making mud pies.

Ficklen attended the University of Virginia, where he was a friend and classmate of future president Woodrow Wilson. He then returned to Danville to read law, but soon turned to writing instead. This took him to New York where he wrote for Puck, Life and other mass-market magazines.

Returning to Danville a second time, he rose to the position of editor at The Danville Register. He was also co-founder of the Danville Free Press. In 1928, he served as a delegate to Virginia’s General Assembly. He was known there for his pungent verbiage. Senators sometimes left their chamber to hear him speak on the floor of the house.

Yet despite his fame in Richmond, Harry Ficklen never achieved his goals of serving on city council or as Danville’s mayor. He lost his 1928 bid to Captain Harry Wooding, who had served as mayor for 36 years at that time. Though Ficklen appealed to the courts (as he did on many issues), Captain Wooding’s victory was upheld.

Ficklen also thought himself a real estate mogul. He always carried a satchel of office supplies in case he should need to draw up a deed. However, being loath to sell his land, he lost much of it to taxes and to lenders. 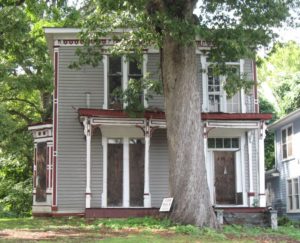 At the age of 49, Harry married Mary Louise Tucker, daughter of a local warehouse owner, in 1916. From that time, Mr. and Mrs. Ficklen resided at 886 Grove Street (at right) in the Old West End. Harry was never the same man after Mary’s passing in November 1929. Visitors to the widower’s Grove Street home tell of a man in a claret-colored housecoat. There were two easy chairs before the fire, cigars, whiskey, and stories about the people of his day.

On his passing eight years after his beloved Mary, Harry C. Ficklen was remembered as a gallant Virginia gentleman and one of the most colorful men of Danville.