Harry Burns Trundle resided in the Old West End at 122 Chestnut Street for much of his time in Danville. He is shown above with a present-day photo of his home above.

A son of Joseph Henry and Emily Thomas Trundle, Harry Burns Trundle was born in Frederick, Maryland, in 1875.  He was named Burns for the Scottish poet with whom the Trundle family had a kinship.

It was December 1899 that he became associated with Col. Al Fairbrother as a part owner of The Bee.  He often recalled that newspaper being born during a blizzard.

In 1900, the afternoon Bee was sold to the Hon. Rorer A. James, owner of the morning Danville Register. Trundle took over the management of both papers.

In 1901, Trundle resigned to join again with Col. Fairbrother in an advertising business in Atlanta. A year later, he returned to Danville and became associated with Boatwright Brothers Company, Danville’s premier printer. He remained there until late 1903 when Mr. James again sought his services. 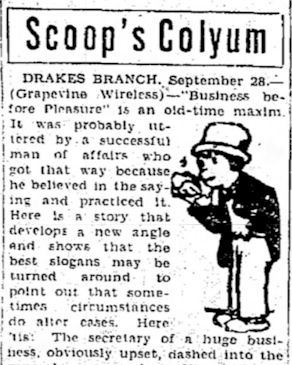 Probably no daily task at the newspapers excited him more than his “Scoop’s Colyum.” He recognized that a certain amount of levity was good every day, and it became one of the newspaper’s most widely read features.

Tragedy occurred on Saturday, December 12, 1936. On his way home for supper, Trundle was struck by an automobile while crossing Main Street at the corner with Chestnut – only a few yards from his home. His left leg was broken, and he suffered a severe blow to the head. He passed from his injuries early on the morning of December 18.

As an active member of the Virginia Press Association, Harry Burns Trundle was remembered in newspapers around the Commonwealth including the Richmond Times-Dispatch, the Lynchburg News, the Lynchburg Advance, and the Roanoke Times.

J.T. Page offered the following tribute: “Danville is richer because Mr. Trundle, a big-hearted man, lived here. He carried a smile on his face and a twinkle in his eyes that radiated sunshine into the hearts of those with whom he came into contact. An advocate for justice for the humble has passed. Alas, a noble citizen has gone to his reward.”