Punxsutawney Phil made his annual appearance on February 2 – seeing his shadow portending six more weeks of winter.  At the same time, our Old West End groundhogs rose to a sunny morning suggesting more winter for Danville as well.  The National Weather Service, perhaps being somewhat cautious, is predicting “typical” weather for the next few weeks.

Just a year or two ago, the number of groundhogs or woodchucks in the Old West End was somewhat overwhelming.  Now, with more and more homes occupied and the reported appearance of a coyote, they seem a little less prevalent.  Still, there are plenty enough to destroy a vegetable garden or undermine a foundation.

Fascination with the groundhog is not new in Danville.  Back in 1927, Old West End resident Alvis D. Starling acquired what he believed to be the grandparent of all groundhogs to appear in the window of his downtown hardware store.  His Virginia Hardware and Manufacturing Company was at 246 Main Street – the northernmost shop in the Dudley Block.

Starling himself lived at 1037 Main Street. 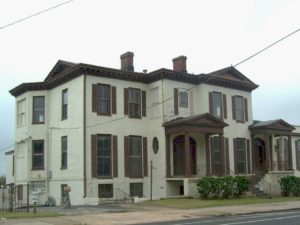 The Bee reported that Starling’s beast was no common groundhog.  Their average weight is eight or nine pounds.  Starling’s groundhog, named Peter, was an 18 pounder.

Starling made a pen for Peter in the front window of his store which, by good chance, was struck by the sun in the morning hours.  On February 2, 1927, Peter saw his shadow several times.  According to The Bee, “A large assemblage gathered outside the hardware store window at a quarter past 10 o’clock when the rays of the undimmed sun crept gradually toward the groundhog’s position.  Despite his frenzied effort to escape a substantial shadow was cast.  Whereupon the groundhog with a gesture of disdain to those beholding the phenomenon, put his paws to his nose and smiled a mirthful smile which revealed all his front teeth.”

Wishing for warmer weather, Starling attempted to move the animal into the shade.  However, the crowd would not hear of it.  Peter’s forecast of continued winter weather was left to stand.

It was later learned that Peter was actually a household pet who lived on Patton Street.

Fascination with the groundhog a.k.a. woodchuck is not unique to Danville.  Famed poet Robert Frost wrote an ode called A Drumlin Woodchuck included below.

One thing has a shelving bank,
Another a rotting plank,
To give it cozier skies
And make up for its lack of size.

My own strategic retreat
Is where two rocks almost meet,
And still more secure and snug,
A two-door burrow I dug.

With those in mind at my back
I can sit forth exposed to attack
As one who shrewdly pretends
That he and the world are friends.

All we who prefer to live
Have a little whistle we give,
And flash, at the least alarm
We dive down under the farm.

We allow some time for guile
And don’t come out for a while
Either to eat or drink.
We take occasion to think.

And if after the hunt goes past
And the double-barreled blast
(Like war and pestilence
And the loss of common sense),

If I can with confidence say
That still for another day,
Or even another year,
I will be there for you, my dear,

It will be because, though small
As measured against the All,
I have been so instinctively thorough
About my crevice and burrow.