The following is taken from “The History of the First Presbyterian Church” published on its 125th anniversary in 1951.  The photo above is from that year.  First Presbyterian is located in the heart of the Old West End at 937 Main Street.

In 1804, the growth of the town of Danville had gotten to a point where needed school facilities were arranged for and, also, religious services. The labors of Rev. James Tompkins, of the Presbyterian order, were obtained. He ministered to the community for twelve months but did not establish a church.

During December 1826, a young licentiate, William S. Plumer, of the Presbytery of New Brunswick, was sent by the Synod of North Carolina to locate a mission point in Danville. He seems to have labored well, for two Presbyterian ministers, Rev. Samuel L. Graham and Rev. James N. Douglass, were attracted by the interest shown to hold a two-day meeting in the town on December 30 and 31, administering the sacrament of the Lord’s supper on the latter date.  This was the first time that a communion service had been held here and people were profoundly, moved by it.

Two people who heard the visiting evangelists were so stirred that they formed themselves into a church forthwith. Both of them offered their letters as their qualification for membership, Mrs. Jane Thornton, hers from Pearl street church, New York City, and Mr. James Ross, his from his church in Ireland. Their remains lie in the old Grove Street Cemetery.

Thus, on December 31, 1826, the First Presbyterian Church of Danville in the Commonwealth of Virginia, came into being, the first church in the town.

Evidently the seeds of Grace had fallen on the good ground of many hearts, for frequent inquiry meetings were held which were very solemn and serious occasions, resulting in additions to the church that increased the membership to 34 by the time that Orange Presbytery met in Danville on May 19, 1827, to ordain Mr. Plumer and install him as the first pastor of the new church. These services were, by their qualities of reverential solemnity and beauty, of great effect in centering the minds of the people upon their religious needs and responsibilities and left a lasting impression, not only upon the denomination’s adherents, but, also, upon the whole community, a worthy place in the religious life of which the church has maintained from then until now. It was dedicated to God on June 7, 1828. 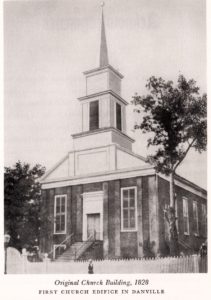 The Church held its services at first in the building of the Danville Academy at the corner of Jefferson and Loyal Streets, where Reverend Mr. Tompkins had preached. In 1828 it acquired a lot on Jefferson just south of Main and erected its own building, the first church edifice of any kind in the town. This wooden structure was replaced in 1853 with a substantial brick building (the material from the old building is said to have gone into the construction of J. R. Pace’s tobacco factory at the corner of Lynn and Newton Streets). This building was torn down in 1879 and rater was replaced by a larger and more suitable building which is still standing and is now [in 1951] the First Christian Church.

In 1908 the congregation began to think about a new location, noting the trend of growth of the city westward, and the needs of a growing congregation. These thoughts crystallized into action shortly thereafter. A fine location at the southeast corner of Main Street and Sutherlin Avenue was purchased and building operations soon got under way. A beautiful church home was the outcome. It was dedicated September 8, 1812, with elaborate ceremony. In 1925 that portion of the building devoted to the Church School was enlarged, this being made possible by Mrs. F. X. Burton, one of the Church’s most interested members and benefactors, securing and presenting to the Church the adjoining lot, and by the generous assumption of financial obligations by other members.