Danville Police Chief R. E. Morris resided at 300 Girard Street in North Danville – near the Richmond Boulevard.  He lived there with his wife an nine children.  The youngest, Bessie and Jessie, were two-year-old twins in March of 1911.

That’s when Chief Morris was up for re-appointment by the City Council.  But on the eve of that appointment, a man in a red sweater stepped off the train from Richmond. He made no announcements as to who he was or what his business entailed until he reached the courthouse. Upon arriving there, he presented himself as Secret Service from Atlanta, and requested that the Chief of Police be summoned.

As word got out that something was going on at the courthouse, citizens came out to see for themselves. At first it was supposed that this was a prank to prevent Morris’ re-appointment.  But when his daughter rushed the courthouse, and word was soon thereafter received that Morris had confessed to a murder he had committed some fourteen years ago, the public began to consider another side to Morris.

He was not, after all, universally popular. He was known to have a temper he was unable to curb and to be too quick with his gun. He had shot three men in the five years he had lived here, killing two of them. In self-defense, he claimed. 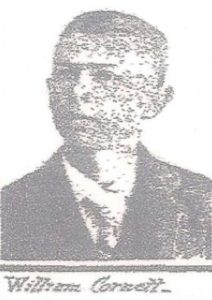 It was in self-defense, or so he said, that he had killed a man in Harris County Georgia who had made advances toward his sister and then threatened her when she rebuffed him. Morris claimed he was a liquor blockader and a low sort with a reputation of ruining women. It’s unlikely. William Cornet was a clean-cut family man with three small children of his own. Morris shot him through his window as he was taking off his shoes.

In all cases, as detectives would later learn, Morris’ victims knew too much about his dealings and had the power, if not the actual intention, to incriminate him.

Police Chief Morris, whose real name was Thomas Edgar Stripling, had received a life sentence in Cornett’s murder and was awaiting appeal when he escaped. He moved from city to city and eventually found his way to Danville, confident that, with his tanned skin and black moustache, he would not be recognized. His downfall was that he took too much pride in his disguise, and in the fact that he was, now, living such an exemplary life. At least it looked that way.

And it was certainly what he wanted the Governor of Georgia to believe when he was returned to that state. He was sent back to jail, where he stayed for five years before the governor released him in answer to a request by his daughter. He’d contracted consumption (tuberculosis), and wouldn’t the governor allow him to spend his last days at home with his family who needed him?  The governor, up for re-election, granted the request in 1916.

Thomas Edgar Stripling had fooled them again.  The convicted but released murderer, and former Danville Chief of Police, lived another 46 years.  He died in Alabama in 1962 at the ripe old age of 96.