“If you are going to write about Virginia,” Mary said …, “try to tell both sides. Life here is not just a tale of fine old families who live in fine old houses enclosed by fine old box hedges …”  Such was the advice given to Julian Rutherford Meade by his sister as he set out to write his highly-acclaimed first book, I Live In Virginia.

Born in Danville in 1909, the son of a former mayor, Julian confessed that he always longed for the stage, but history shows that he was born for the pen.  Following his love for acting, Julian actually did move to New York for a time and tried his hand at it, but, disillusioned, he soon returned home.

In 1929, he spent a summer in France but returned again, this time to teach French at George Washington High School.  That same year, Julian wrote some sketches about the textile strike at Dan River Mills.  He shared his stories with the New York Herald Tribune and The United Press International, who published them. The pieces were described as having “a color and style that marked him as a writer of no small talent and as a thinker to be reckoned with”. 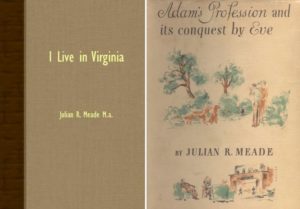 Finding his journalistic work well received, he decided to try a larger piece, and in 1926, I Live In Virginia was published.  It was little more than a series of disguised biographies of his acquaintances and his family.  Sometimes those biographies were more honest and less well disguised than their subjects appreciated.  However, the book was well received by critics.  Some compared his work to Thomas Wolfe’s Look Homeward Angel.  These comparisons to Wolfe resulted in a meeting of the two authors.  Wolfe became something of a champion of Meade and his work.

Julian also had a deep interest in gardening and was often asked to speak on the subject. Soon he was writing about gardeners too, if only anecdotally.  His book Adam’s Profession and Its Conquest by Eve satirized Danville’s garden club scene.

Julian also had a great love for children, and his most successful books in terms of consistent sales were those he wrote for a young audience.  These include Peter by the Sea and Miss Couch and the Scamps.  Teeny and the Tall Man, in which “the tall man” is Julian himself, is a bestseller among children’s literature even today.

Julian resided with his parents at 139 South Main Street – next to today’s Modern Pharmacy.  That area would have undoubtedly been included in the Old West End National Historic District when the district was created had the homes not already been displaced by doctors offices and drug stores.

Julian Rutherford Meade passed on the 9th of July 1940 at the tender age of 31, and is interred in the Green Hill Cemetery.  Extraordinarily tall and angular, he had always been in weak health.  He died of complications of an “involved gallbladder.”  His abbreviated literary career ought to have imprinted him more firmly into American culture than it did.  His contributions to the world of literature were significant.  He is to considered by most to be Danville’s greatest author.