Danville, in the first half of the twentieth century, had established some valued Thanksgiving traditions. There was the annual High School football game, the knitting mills held their yearly dinner with dancing to follow. And, for most, the day offered an opportunity for families to gather around family tables all over the city, enjoying good food and conversation amidst loved ones.

Since Lincoln’s time, the date of Thanksgiving had never been in dispute. But when the Great Depression hit, retailers began to consider how an extended Christmas shopping season might benefit the sluggish economy. Pleas to President Roosevelt fell on deaf ears until, in 1939, the world found itself at war. 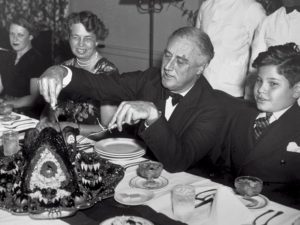 That year, Roosevelt decided that Thanksgiving would arrive a week early in Washington, DC, and he invited the other states to follow suit, though law provided that each state could make its own decision independent of the Federal proclamation. Nearly half of the United States accepted that invitation.

In Danville, things were more confusing still. The Tobacco Association, with its independent network of banks and offices that dealt with business both nationally and internationally, had already fixed their holiday to fall on November 30.  And so, the city, rather than choosing between the two holidays, decided that it would observe both.

Danville celebrated the first section of the dual Thanksgiving today. While the tobacco market remained open, also the banks, and while the mercantile activity was general, the schools were in vacation until Monday. The city and state offices in the city hall were closed, also the Post-office.”

But the extended holiday did nothing to boost sales and only caused confusion. In 1941, after much complaining, President Roosevelt decided that Thanksgiving should, from thenceforth, fall upon its traditional date, beginning in 1942.

As it turned out however, the “last early Thanksgiving” wasn’t the last at all. While the edict which declared that the holiday should fall on the last Thursday of the month was generally understood to mean the fourth Thursday, it did not take into account that 1944 would feature five Thursdays. Once again, the nation was divided, and at a time when supplies were at their lowest.

Overall, the general feeling was that the enjoyment of the Thanksgiving holiday was lost by the fact that there were too many of them, and that the Christmas season “had been extended beyond sane limits.” 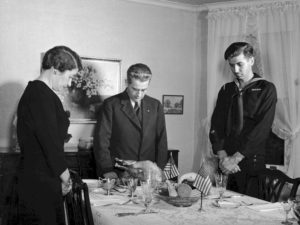 Thanksgiving, the first in six years under world peacetime conditions, is being quietly observed in Danville today, with nearly all business idle and with festivities marked by turkey, plentiful on the tables. The spirit of Thanksgiving this year appeared more pronounced in many households than in recent years with the return of hundreds of discharged service men.

While there may be much wrong in the world today, I’m grateful to enjoy the holiday in Danville, my home these last several years. And my home for a long time to come. May the turkey be plentiful, and may your favorite team win!  [VC]