More than 25 cities across the United States have recently removed or relocated Confederate statues and monuments as a result of debate about race and history.  Danville, too, has had a Confederate statue removed, but at a different time and for entirely different reasons.

Many have noticed the base for a such a monument on the lawn of the Old West End’s Sutherlin Mansion (above), now the Danville Museum of Fine Arts and History.  There were many stories about the purpose of the base.  Some said a statue was never erected.  Others said it was missing or stolen.  Here’s the real story.

Dr. B. B. Temple fought in the Civil War along with his six brothers.  He felt that it was the women – the mothers and wives, sisters and daughters – who suffered most from the war.  He thought they deserved a monument, and for the next thirty years he dedicated himself to that idea.  He even left $500 in his will for that purpose.  Then, for another twenty years, his wife raised money toward the same goal.

Finally, in March of 1925, Danville’s local newspaper, the Bee, announced that, “The long cherished dream of the late Dr. B. B. Temple that the women of the Confederacy should be memorialize in an adequate way in Danville is about to come true.”

Mrs. Temple hired Dudley Thompson Warren of Roanoke to sculpt, “a typical Confederate mother, contemplating the knapsack and the cap of her son killed in the struggle.”  Soon, the base shown above was erected in preparation for completion of the sculpture.

At four o’clock on June 16, 1927, nearly fifty years after Dr. Temple began his crusade to memorialize the heroic dignity of “Southern Womanhood,” the statue was unveiled with great fanfare.  Sadly, it was not well received.  The Bee reported, “the general feeling as to the execution of the work was disappointment.  The figure of the Confederate mother is somewhat heavy, coarse and lifeless.” 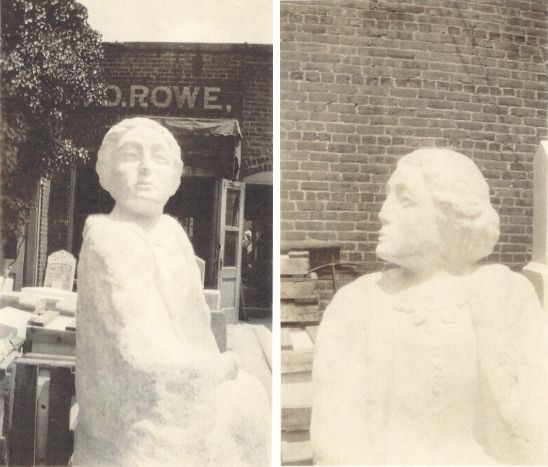 By July 27th, after public appeal to Mrs. Temple, the statue was removed and taken to the local marble yard of W. D. Rowe at 417 Patton Street (site of the present courthouse).  He was anxious to cut up the statue because too many people came to see it.  Thus, the Confederate mother was likely made into headstones.

While the sculptor was paid $1,300 dollars to acquire the stone, he was to be paid for his work from donations made after the statue was erected.  It does not appear that ever happened.  Perhaps unsurprisingly, there are no other known works by the same artist.

Some suggested the city should replace the monument but the matter was dropped.  It does seem a pity that Mrs. Temple died just four years later without realizing the dream she shared with her late husband.  But at the same time, the Old West End may be fortunate in avoiding today’s Confederate statue controversy.