Last Week’s post about the Sunnyside Home and its location at 723 Main Street, prompted a descendant of the owners of that house to step forward with some additional information about the woman who was one of the wealthiest women to have lived in Danville and a patron of the city’s many beneficent organizations.

Alice Shelton Burton was born in Milton, North Carolina on 10 January 1852 to Willoughby and Arianna Robertson Shelton. Mr. Shelton, a prominent figure in the tobacco business in Yanceyville, North Carolina brought the family to Danville when Alice was sixteen. She was educated privately in Yanceyville and then attended Salem Academy in Winston-Salem before returning to Danville.

In 1873, at the age of 21, she married Franklin Xavier Burton, a well-established member of the tobacco industry here. Mr. Burton was half-brother to Walter T. Paxton and Rev. John W., both of whom lived at 815 Main Street. (Read more about the Paxtons here).

Mr. Burton, already made wealthy by tobacco, foresaw a future in the textile trade and was a founding member of Morotock Mills, part of the Riverside consortium of textile mills.

When Mr. Burton passed away in 1903, Alice was left a widow with a significant fortune. Almost all of her income came from textile stocks, as she herself stated in a letter dated 26 January 1921.

“I do not know whether I feel older than I did this time last year or not. Am 69 now. The year started off with me rather badly. I lost $20,000 which I invested 2 years ago in Jobbers Overall Co. of Lynchburg. I know you will wonder why I did not put it into cotton mills. Well, everything else I have is in cotton mills. And if the cotton drops out of that I will be dead broke. I am trying not to worry over it and to think as little about it as possible. Of course it affects my income right much. I’m trying to economize, but economy and I were never close friends so I do not know how we will pull together.”

She was not, however, ruined by any of her investments. As stated in the previous post, her assets upon her death were estimated at $705,000 dollars, several million by today’s standards.

“Practically all of Mrs. Burton’s life was spent in doing good,” her death notice of 2 January 1929 stated. Of her many charitable causes were the local Presbyterian churches. She was the largest contributor when the new Greek Revival building was built for the First Presbyterian Church at the corner of Main Street and Sutherlin Avenue. She also supported Shelton Presbyterian Church which had been founded by her father. Burton Memorial Presbyterian Church was another sustained by her, and which she founded in memorial to her husband. Both churches were located in Schoolfield, though the latter burned in 1940 (it has since been rebuilt.) “Mrs. Burton was a member of the Wednesday club and was identified with the Red Cross, the Community Welfare Association, and the YWCA,” her death notice goes on to say, “all of which materially benefited by her largesse.” The notice also recognized her as being a substantial contributor to establishing the first Y.M.C.A. here. 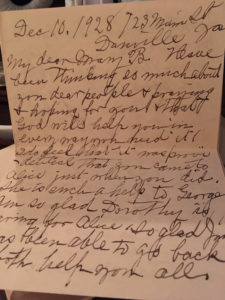 By all accounts, and as proven by her letters, she was a generous, kindhearted woman who loved her family dearly. They, too, benefited by her generosity, proven by many of her letters in which she would often enclose some monetary gift.

Another in 1927 was sent for medical costs for her cousin Mary’s daughter Alice Burton Barnes. “With pleasure I am sending a check for $35.00 to pay for the removal of the tonsils and that my namesake will have perfect health. Ruby will need a little spare change for the street car, so I am including some. Wish I could see you and hope I will be able to send you both home when you are ready to go.”

A few months later another request came for financial assistance. It seems Alice was in a hurry to relieve her cousin’s extremis and in her haste wrote the check out wrong. Her concern and remorse over the mistake are endearingly apparent.

“I received your letter and am so sorry you did not get your check in time. When you did get it, it was written wrong. I gave all of you a lot of trouble. You might have had it sooner. I always get annoyed with myself when I behave that way. And I always do that way when I get in a hurry. My motto should be, ‘make haste slowly’.”

It’s quite apparent that by 1927 she was slowing down considerably. Her death notice indicated she had been suffering from a weak heart for some years previous to her death. In her letters she mentions her inability to get around and how grateful she is for the help she receives. By late 1928, her handwriting becomes almost illegible.

A few days after Christmas, Alice Burton contracted a cold. “She yielded promptly to treatment, however, and for two days apparently had weathered the attack.” But within a few days she was coughing again. “The treachery of influenza was quickly manifested.” Alice Burton developed pneumonia and passed away at 7 p.m. on New Years’ Day, 1929. 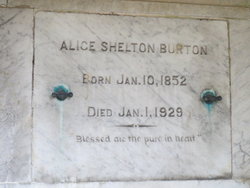