The house at 830 Pine Street was originally part of the William S. Patton Estate. Patton owned a great deal of land in the Old West End, most of it being on the Jefferson Avenue and Pine Street.  Much of that land was inherited through his wife, Catherine Ross, daughter of John Ross, one of Danville’s founding fathers.  (More about the Patton family.)

In 1890 this Pine Street property was conveyed to Sarah E. Clark who lived there with her daughter Ella Allen. Both women were widows. Ella was born in Milton, North Carolina in 1860. She came to Danville around 1888. The Bee regretted her passing by recalling that “her heart ever went out to the less fortunate ones in life, a kind, obliging neighbor, a steadfast friend, a devoted mother.” 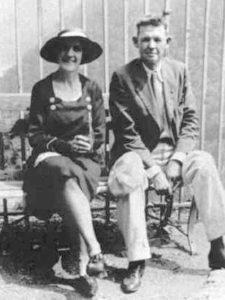 In 1915 the house was sold to sisters Lessie Ramey Ashworth and Florence Ramey. Lessie and her husband Posey W. Ashworth (at right) moved there from East Green Street.

Mrs. Ashworth was born in Danville on June 28, 1887 and married Posey in 1907. Posey was an insurance salesman and something of a character judging by his contributions to anecdotal articles in the Bee. On one occasion, Mr. Ashworth related how he had been caught in traffic when a cockroach infiltrated a traffic light, causing confusion in all directions. On another occasion he was quoted as saying, “Men don’t live longer. They still live about 40 years, and after that they just stay here.”

Mr. Ashworth also related a story that transpired in his line of work when he was filling out a life insurance application for an English gentleman. The gentleman’s was ashamed his father had been hanged and wouldn’t say so outright. Instead, when the insurance application came to the question regarding his father’s cause of death, the gentleman wrote: “Met his death while taking part in public function during which the platform on which he was standing gave way beneath him.” It’s clear Posey liked a good joke, and to share it with others.

Posey and Lessie lived in the house on Pine street in the 1920’s with Mrs. Ashworth’s mother, Minnie Ramey. They later moved to Arlington Place where they spent much of their married lives.

The home was sold in 1928 to William B. and Elsie G. Anglin. Mr. Anglin worked as a mechanic at the city’s Light and Power Station and later became Chief Engineer of the City Electric plant. The couple shared the house with their daughter Coreta and her husband Walter Frances. In 1940, at the age of 52, Mr. Anglin died, but Elsie remained. It appears that sometime around 1940, Walter moved to Greensboro, where he took a job in a hardware company. It’s unclear whether Coreta went with him, but she and her daughter returned to the house on Pine Street to live with her mother. By 1950, when Mr. Frances died in Greensboro, he had remarried.

Purchased by E.C. Gerringer in 1972, the home was then used as a rental, including a period in 1986 when it was an Averett College fraternity house.